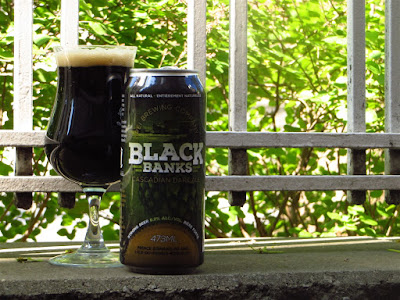 Teena was in New Brunswick last week and brought me back some craft beer from the east coast and included one from PEI Brewing Company, their Blank Banks Cascadian Dark Ale.

I have written about the Gahan House before. Wait, you think I've gone off topic but really I haven't.

Kevin Murphy started up a brewpub called the Gahan House in Charlottetown in November 2000. It was quite successful. My friends, Alfred and Christine, have eaten there and said the food is great. I know their beer is.

In 2011, Kevin teamed up with another businessman, Jeff Squires, to establish the PEI Brewing company, which opened up its doors in 2012. 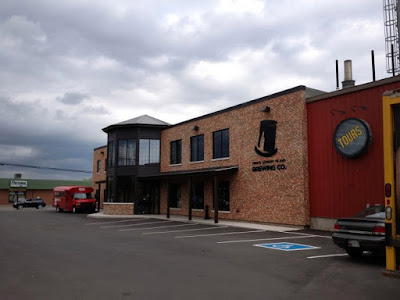 First of all, it is good to know what Cascadian dark ale is. The style uses toasted malt and hops that come from the Cascade Mountain Range which runs through British Columbia, Washington, Oregon, western Idaho and northern California.

Black Banks pours black in colour with a brown head. Nice lacings line the glass as I sip. The aroma has some coffee in it.

When I sip, I find the Black Banks starts with a little bitter chocolate, before the hops work their way into the flavour, with some nice piney tones. My sip finishes with a nice little bite. This is a very nice ale that I would have again next time I'm down east and find it on tap.

I'm glad Teena brought me back a couple. I'll surely enjoy the next one too.