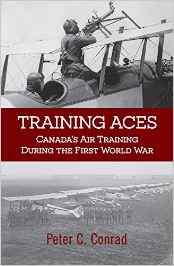 I have always had an interest in the air war during the First World War. Aviation was so new, yet quickly adapted for war. The Wright Brothers made the first flight in 1903 and eleven years later, war broke out.

Training Aces tells the story of how Canada trained men for this new method of warfare.

When the First World War broke out, little was known about aviation. Even less was known about using the biplane as a new weapon. "Training Aces: Canada’s Air Training During the First World War" chronicles the development of military aviation in Canada that began in the years before the war when early flight experiments were made by the Canadians and Americans, including Alexander Graham Bell, William Wallace Gibson, John Douglas McCurdy, William McMullen, Glenn H. Curtiss and William Straith.

This book portrays the important role that Canada played in the success of the air training efforts before and during the First World War, and describes the establishment of two aviation companies in Toronto and Vancouver. The Canadian air training system played a significant role in the overall development of military aviation and had a major impact on the British Commonwealth Air Training Plan of the Second World War.

I have read about the exploits of Canadian aces, Billy Bishop and Wop May and found it very interesting to read in this book the training they would have to go through. The author, Peter C. Conrad, lays out in great detail the advancements in training that were made during the war years.

Where the Wright Brothers had flown the very first heavier than air flight, and designed what they considered the first commercial plane, Alexander Graham Bell, inventor of the telephone, thought their design was flawed and created a much safer and durable version. The first part of the book covers extensively Bell's work in this area.

One thing I really enjoyed was the amount of pictures that were in the book. They really brought the atmosphere of the period to the reader.

This is a must read for those with an interest in World War One and Canada's role in it.