Beer of the Week - The Beers of Boxing Rock Brewing 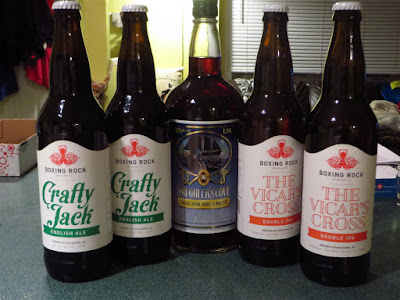 Teena was in Halifax, Nova Scotia, last week and despite the danger of having her suitcase being overweight, she brought my back some beers from Boxing Rock Brewing Co.. We both enjoy dark rum so a delicious bottle of Smuggler's Rum also came home with her and joined in the picture.

Boxing Rock is a brewery that was opened in 2012 by two engineers, Henry and Emily, in Shelburne, which is in the southern end of Nova Scotia. The brewery is named after a famous spot in the area. According to local folklore, Boxing Rock is where bickering seamen were left by their captain to sort out their differences. The choice: box until only one could return to the ship or shake hands and share a beer.

So how is the beer? 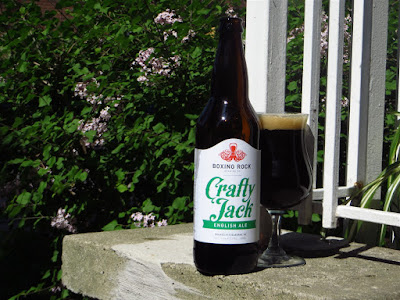 I was hoping to find the origin of the name of this beer but couldn't. (Boxing Rock responded when Teena tweeted this post that Crafty Jack is a tribute to Emily's late English father-in-law)

Crafty Jack pours dark brown in colour with a light brownish head. The head is quite lively and I had to wait for it to settle before taking a picture. In the aroma, there is some coffee and an English hop note.

For a 4.2% apv beer, it is so full of flavour! It starts with bitter coffee which then gives way to a very nice English hop bitterness in the finish. There is something about English bitters and ales that I love, and it is all in here.

I wish I could get this in Ontario. 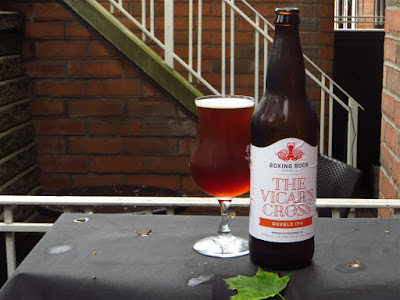 I didn't do a very good job of pouring this for the picture. When I added more to my glass, the head came to life.

The 8.5% apv Vicar's Cross pours light brown in colour with a light brownish head. Malt and hops fill the aroma. This is a very well balanced IPA. It's strongly flavoured like an IPA should. My first sip finds hop bitterness right away but halfway through, the malt comes in to settle that down.  Just when I think there might be some sweetness in the finish, the hops return. This is not an overpowering bitter IPA but a nicely balanced one. With such a high alcohol per volume, this is a beer you just would have one of in a night.

One very enjoyable one!