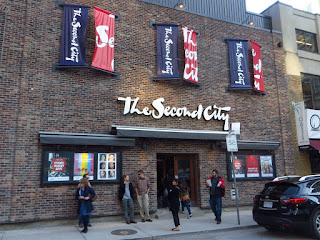 Tonight Teena and I went to Second City to watch their newest show, The Hotline Always Blings Twice.

The Second City is proud to present its 77th Mainstage Revue: THE HOTLINE ALWAYS BLINGS TWICE.

Enjoy a night of unforgettable characters, supremely funny sketches, and ridiculous rants created by the cast the Toronto Star calls “six of the funniest people you could hope to meet.”

THE HOTLINE ALWAYS BLINGS TWICE is an all-new comedy confection in the legendary tradition of The Second City, where nothing is sacred and almost anything can be hilarious. Laugh out loud as we skewer everything from blind dates, to binge-watching, to Blue Jays bandwagoners.

Teena and I haven't been for years but went last year and haven't missed a show yet. The troop is always hilarious and tonight was no different. My favorites were the very first bit of the night about a guy during frosh week, a father and daughter at a Jays game with an obnoxious fan and a grade two stage performance.

It's all fun and I can't believe how inventive the group can be with their ideas as some are very off the wall. It's also amazing, as Teena noted, how the performers can jump from one character, instantly into the next one, and totally own the role. Only great performers can do this. This is my third show with most of the the same performers in it, and feel they certainly are going places, like so many other Second City Alumni.

The Hotline Always Blings Twice is on till July 3 and well worth going to. I know Teena and I will be at the their next one. 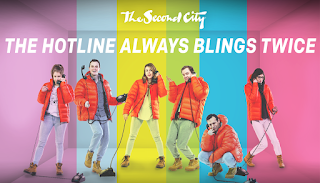