Play - "The Death of the King" at The Theater Centre 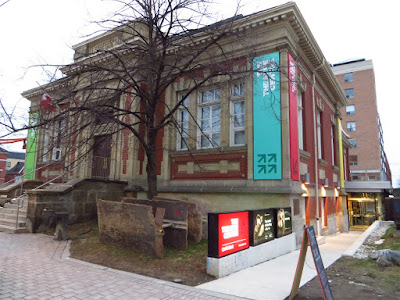 The Theater Centre opened in our neighborhood in 2014. In February, Teena and I went to Cinq à Sept  in the theatre's cafe to enjoy a couple of drinks and to have her kick my butt in Othello. That was our first visit but we have never seen a play there.

We have seen productions by the Theatre Centre. Two plays in 2009 when the centre operated out of The Great Hall, Debbie Does Dallas, The Musical, which I thoroughly enjoyed and Hedwig and the Angry Inch, which wasn't my type of play.

We did see one play put on by the Theater Centre after moving into its new location but it took place in a shipping container behind the building and was appropriately called The Container, which was fabulous.

Tonight I finally made it into the main theater (the theater has two presentation areas) to see The Death of the King. 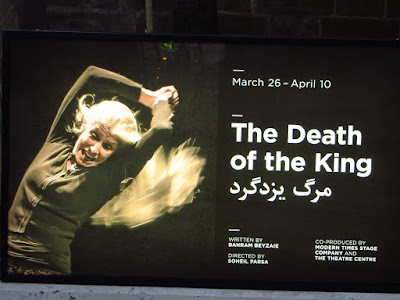 Critically-acclaimed Iranian playwright, Bahram Beyzaie wrote The Death of the King shortly after the Iranian Revolution. Beyzaie’s play tells the story of an ordinary family charged with treason, accused of killing their nation’s ruler. The execution gallows are being prepared while a miller, his wife and their daughter, embark on a desperate bid to reveal the truth about their despotic, yet desperate, leader. This highly-inventive and physical production explores the vulnerability of ordinary citizens struggling under the extraordinary circumstances of their political fate.

I really enjoyed this production, which is based on the true story of the death of King Yazdegerd III, the last king of Persia. The play is 90 minutes long with no intermission (and no late audience admittance once the doors are closed, a rule I loudly applaud).

The play is very intense. Four guards find a miller, his wife and daughter huddled over the body of the dead king. The events which lead up to his death ... or murder, are told in flashback performed by the miller and family. There are some very few humorous moments to break the tension but it is a very engrossing story.

If the main characters who had no names, the miller, (Ron Kennell), the woman (Jani Lauzon) and the girl (Bahareh Yaraghi) had not been played by such strong actors, the play itself, could not survive.

The Death of the King is only playing till this Sunday, April 10. It is definitely worth seeing.
Posted by Swordsman at 22:36