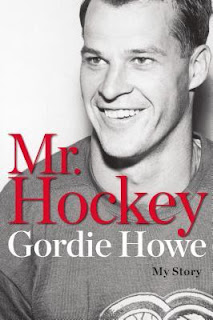 When I was a young kid in the late fifties, early sixties, I was a die hard Toronto Maple Leaf fan. I ate, slept and breathed hockey and the Toronto Maple Leafs. My favorite hockey player though, was not a Leaf. It was Gordie Howe from the Detroit Red Wings.

He would have been around 32-34 at the time I started , but still he was pushing around players, scoring goals (in a time where 20 goal seasons were considered excellent, at 33 and 34 years old, he scored 33 and 38 goals respectively) he was older, could do it all and his birthday falls on the same day as mine. I don't think that helped sway me though, as Maple Leaf Bobby Pulford, also shares that birthday.

Anyways, he has a book out about his life, in and out of hockey, Mr. Hockey, My Story.

Big, skilled, tough on the ice, and nearly indestructible, Howe dominated both the sport and the record books like no one has before or since. Over an incredible six decades, the Hall of Famer had so many accomplishments that he set the record for the most records by any athlete ever in any sport. He also achieved the remarkable feat of playing for six years with his own two sons, Mark and Marty.

But Howe did not inspire generations of hockey players simply by rewriting the record books. When people talk about him, it’s the man they revere even more than the player. Despite his ferocity on the ice, Howe’s name has long been a byword for decency and generosity. A family man, a man of his word, a lifelong ambassador for the game, he is a true icon, and now he takes us through it all, from his Depression-era childhood and early obstacles through the ups and downs of his spectacular career, to his enduring marriage and close relationship with his children, to his thoughts on the game of hockey today.

It is an excellent read, telling his story of growing up in the depression on the prairies, to getting into the Red Wing organization, to meeting his wife Colleen, to the life of playing in the original six NHL, always fearing for your job, no matter how good you were, to finally being able to play with his two sons, Mark and Marty and bringing home the huge paycheck.

Looking back from an era where players are so well paid, and have so much control, the managers of the original six teams of the NHL, Toronto, Montreal, Boston, New York, Detroit and Chicago were brutal. Jack Adams of Detroit was no different. He always promised Howe that he was the best paid player in the league (Gordie explains how teams told their players to keep their playing contracts silent to the others) and later Howe found out that for his years of loyalty, he was not even the best paid player on his team.

No player has been more durable. He played five decades in two leagues, At 46 years old, he was chosen to play in a eight game series against the powerful Russian  all-star team in 1974. Gordie put in 3 goals and had 4 assists.

How durable was Howe? Back in the NHL at 52 years old, in the last playoff series before he retired for good, he scored a goal and added an assist.

Howe tells a great story of playing in that era, his injuries, the crappy equipment and the evolution of the game. I recommended this book to Teena, and to everybody else. Time to read about a true, humble, dedicated, nice guy hero!
Posted by Swordsman at 19:16

It was good ... thanks for the recommendation!