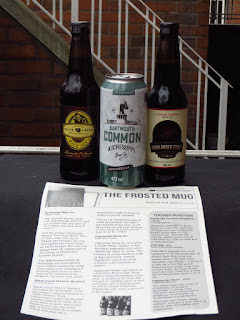 Today I had two surprises to come home to. The first was my Beer of the Month Club package had arrived.

It's the perfect gift for any beer lover! Each month we'll deliver 12 full-sized bottles of hard-to-find, specialty microbrews from award-winning breweries. Each shipment will include up to four different varieties of premium, hand-crafted beer carefully selected by our experts and brewed in limited quantities by master brewers. We sample hundreds of microbrewed beers every year and only the best-of-the-best become selections of the Beer of the Month Club.

This club mixes it up each month. Sometimes I receive beer from two breweries with each supplying two different kinds of beer. Sometimes they send four bottles or cans from three different breweries.

So what did I receive?

Inside the box were four bottles of Highlander Stout from the Highlander Brew Co., just on the northern edge of Algonquin Park. I had their scotch ale four years ago and wrote about it.

Along with it were four pale ales from Black Creek Historic Brewery. This brewery uses recipes and equipment that were used back in the 1860s. I have written about this brewery and beer before and really enjoyed it.

Completing the package were four cans of Dartmouth Common Dampbier from Kichesippi Beer Company. I have done a post on this Ottawa brewery before but this is a new style of beer for me.

Looks like it's going to be a tasty beer month.
Posted by Swordsman at 19:16