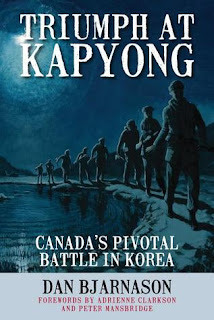 I admit that I don't know much about the Korean War which was fought from June 1950 to July 1953 or Canada's role in it. This why Triumph at Kapyong interested me so much.

April 24th, 1951,was a lonely, moon-lit night in Korea. On a godforsaken hill, a few hundred surrounded Canadian soldiers waited for the fight of their lives to begin. Soon, Chinese communist troops in their thousands, swarmed around them, plunging straight towards the Korean capital, Seoul. These Canadians were all that blocked the way. This is the story of the first battle by Canada's first soldiers in the Korean War: the 2nd Battalion of Princess Patricia's Canadian Light Infantry. These volunteers were straight from Central Casting: truck drivers, construction workers, kids just out of high school, and bored farm boys. Outnumbered and outgunned, this people's army of amateurs beat off some of the toughest troops on earth. This battle that's become a legend takes its name from a nearby peanut-sized village: Kapyong. It's become a mythic Canadian story, except this is mythology that is real.

The book is well-written and focuses on many on the main Canadian personalities who participated in the battle. It follows the "Princess Pats" unit from its miserable voyage across the Pacific from Canada, then across the hills, mountains and valleys as they headed towards the North Korean Border.

Author Dan Bjarnason does an excellent job of putting the reader into the middle of the major battle. He also does a great job in explaining why many Canadians are unaware of our participation on the Korean war. As it was a police action and not a declared war, many Canadians ignored what was going on over there, while it was even happening.

Bjarnson finishes up with a chapter on who won battle medalsand an excellent account of one man who didn't and the prejudiced reason behind it.

Kapyong is such a heroic Canadian victory, a story of hundreds standing off thousands, and this is an excellent account of the battle. 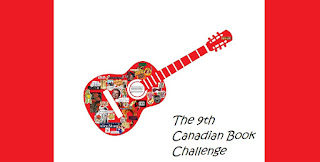