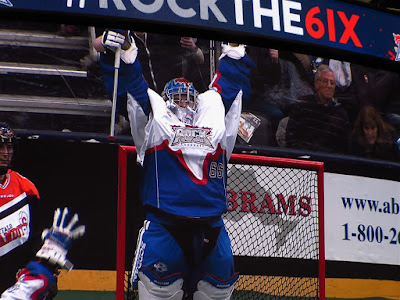 The Toronto Rock have gotten off to a dreadful start to the 2016 season. They came into tonight's game having lost their first six games of the season, five on the road and one at home. Last week they lost in overtime. Tonight at home, against the down the road rival, the 4-2 Buffalo Bandits, they hoped to change that.

Scotty Newlands, as usual, did a great job with both national anthems. 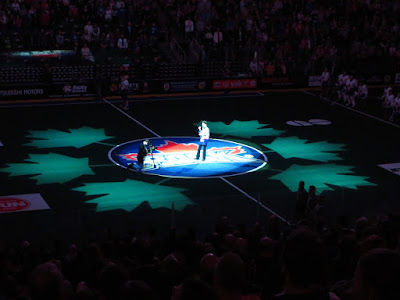 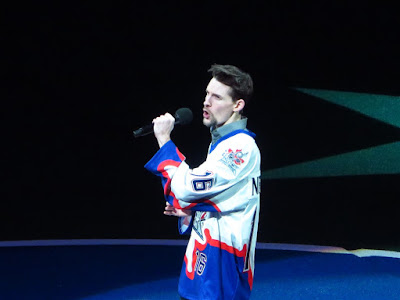 The red headed guys were there again. 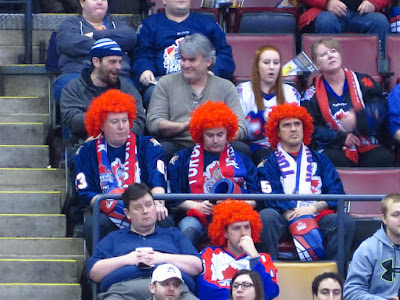 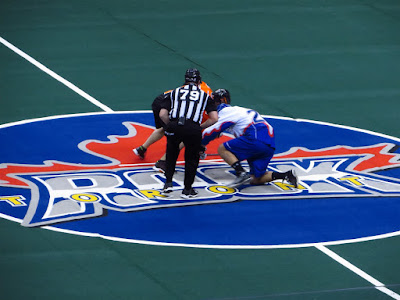 Talk about a bad start to a game. Buffalo scored twice in the first minute and eighteen seconds to take a 2-0 lead. Not only that but we had a dozen Buffalo fans in front of us cheering them on. Damn! 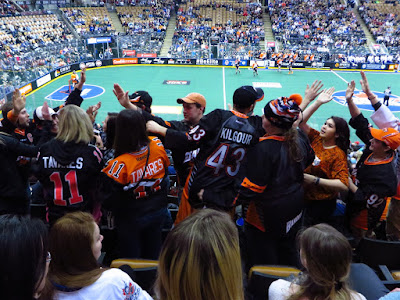 Iggy Rock was not giving up on the game. 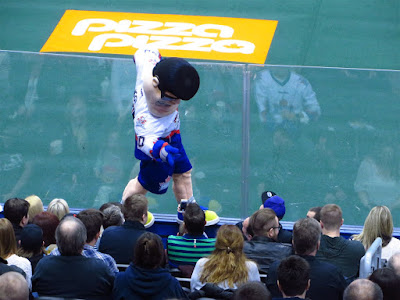 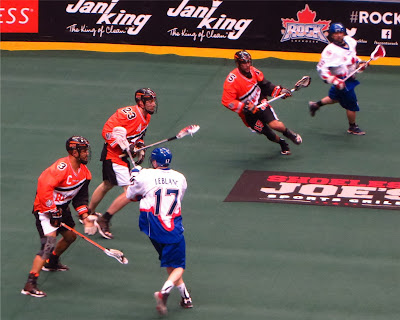 At the end of the first quarter, the score remained 2-0 for Buffalo. 3:33 into the second quarter, Kasey Beirnes put in Toronto's first goal and the Rock flag came up! 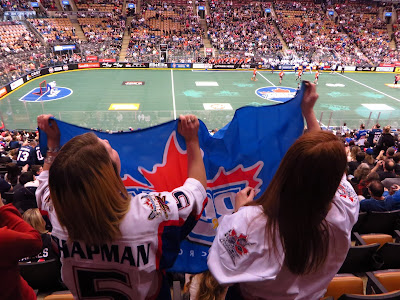 Toronto was fired up. Just 12 seconds later, they put in another, followed by one more 25 seconds late. Still not done, they scored their fourth a minute and fourteen seconds later to take a 4-2 lead.

The Toronto Rock Cheerleaders came out to keep the momentum going. 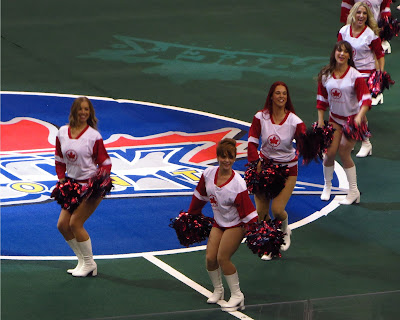 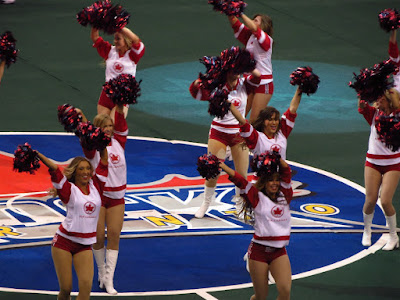 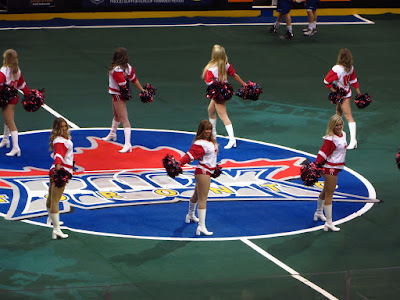 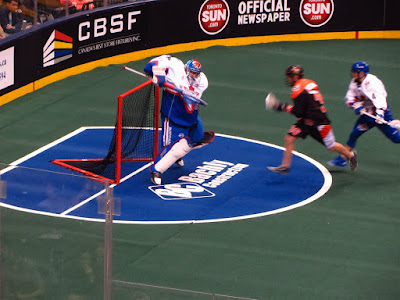 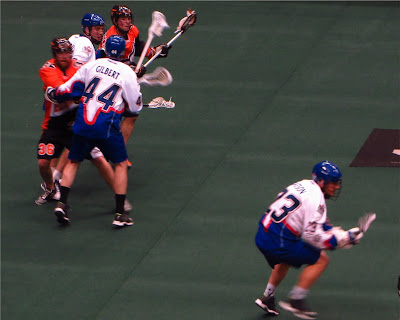 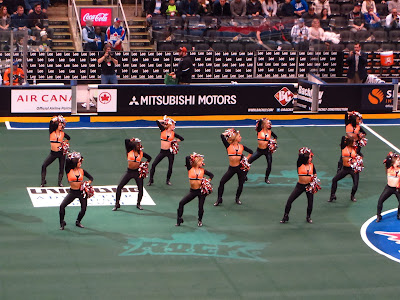 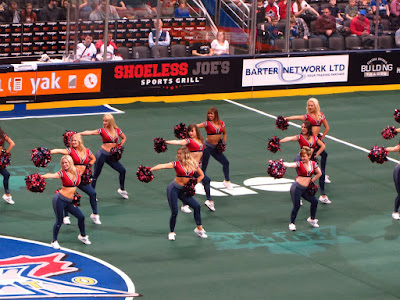 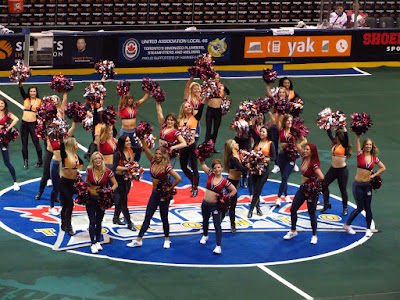 After scoring five goals in the second quarter, the Rock were still down by a goal at the half. There was a lot of back and forth in the third quarter with the Rock going into the fourth tied at nine.

In the fourth quarter, the Rock were down 11-10 ... and then it all came together for them. Colin Doyle, Rob Hellyer and Josh Sanderson all scored to take a 13 to 11 lead. With just over a minute to go, Buffalo pulled their goalie. It's what every home time wants to see in this situation.

After making a great save, goalie Nick Rose, scooped up the ball and tossed it down the length of the court and into the Bandits net. Goalie Nick Roses first professional goal and a game clincher. The picture of his reaction is at the top article.

ROCK WIN!! Final score 14-12.  Here is a 1:36 minute clip of game highlights including a couple of angles on Nick Roses goal.


The Rock Celebrate and salute the fans. 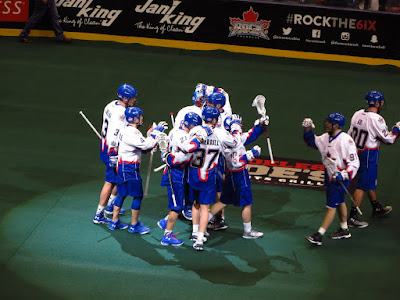 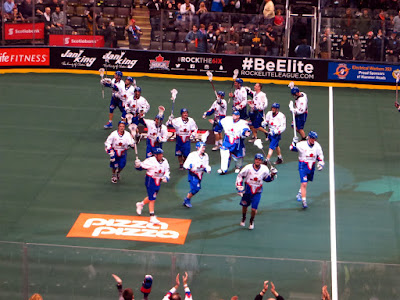 Nick Rose made 38 saves, some sensational, and scored a goal to seal the victory and of course,  was named the game's first star. 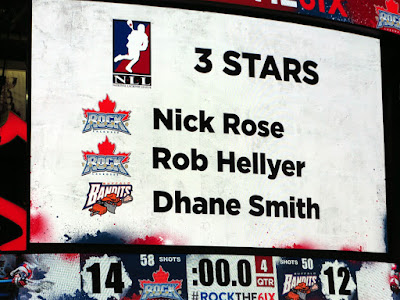 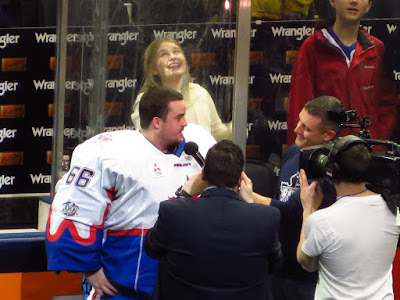 Next Saturday, the Rock take on the Rochester Knighthawks, and yes, Teena and I will be there.
Posted by Swordsman at 23:41