Beer of the Week - The Beers of Northumberland Hills Brewery, Cobourg 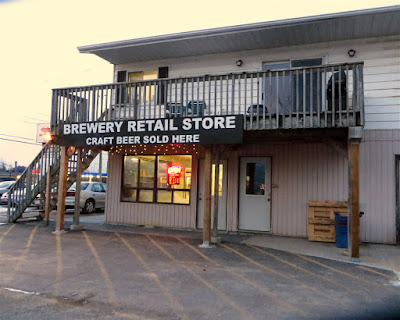 My mother, sister and brother-in-law live in the Madoc area, which is north of Belleville. Yesterday I took the day off from work and went down to take my mum and sister, Judy, out to lunch. I had done a Google search before I left for craft breweries along the way and found Northumberland Hills Brewery, just minutes off Highway 401 in Cobourg. The address is 1024 Division St, but turn at the lights onto Patterson, as that is where the entrance is. I only mention this as I missed it on my first pass.

The retail store has samples, a good size fridge and of course, merchandise. 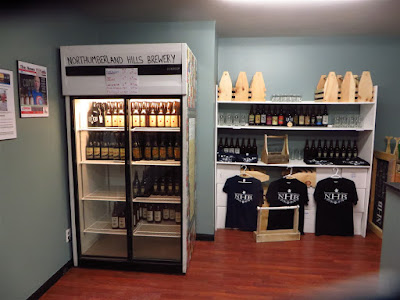 In 2014, the brewery opened its retail store, selling four different beers ... a wheat beer, a lager, a pale ale and an IPA.  All the beers are sold in 650 ml bottles. The grand opening was on November 1 of the same year.

The brewery is co-owned by Rick Bailey and Michael Niles. Rick did what many people dream of doing ... he quit his job to run the brewery. He sold his large house and bought a smaller one, which was a better fit for he and his wife to help finance the brewery. The Northumberland News has an excellent article on the brewery's start up.

Rick was in the retail store when I came in and although it was close to closing, he was quite talkative and a real nice guy.

And how is his beer? 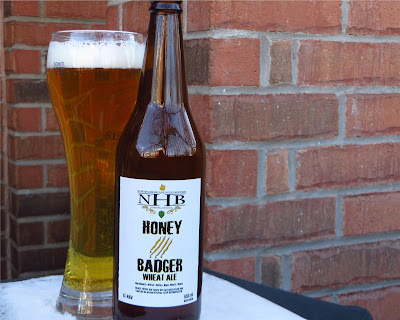 The Honey Badger (I love the name just because of Randall's video) pours a cloudy straw colour with a white head, which takes its time to settle. It's cloudy due to the fact that it is unfiltered. Lacings are left on the inside of my glass when I sip and bubbles continually rise from the bottom. I cannot pinpoint what exactly is in the aroma but it does not have banana, which many wheat beers have. It is a clean refreshing aroma.

It's very interesting to drink. It starts with a slight bitterness but that is smoothed out when the taste of honey and its sweetness comes through. Yes, it is aptly named as there is honey in this. I think I am done with the finish but then a bit of bitterness returns to my palate.

When summertime rolls around, I hope they have this in the fridge when I come by! 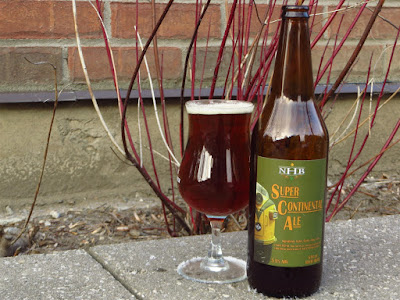 This ale is named after the Super Continental Train that at one time ran with domed cars on a route between Montreal/Toronto and Vancouver.

The Super Continental pours a light brown colour with an off brownish head. There is some citrus or bitter grapefruit to the nose, which I am liking. Lacings line the glass as I drink. This ale starts malt-forward, with a citrus bitterness following through into the finish. It's a very well done ale, that I would have on a regular basis if I lived in Cobourg. I will be bringing more home my next time I'm passing by the Cobourg cutoff.

You will see on the label a picture of a World War 2 Lancaster bomber. The Mk X Brown Ale is named after the 430 Mk X Avro Lancaster bombers that were built in Canada during the war. 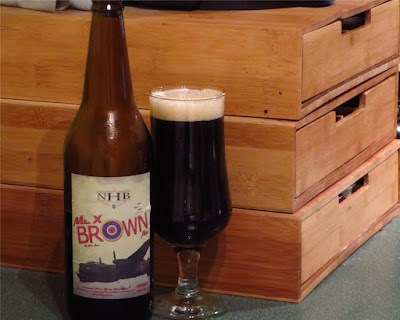 The Mk X pours brown in colour with an off white brownish head. It's too dark out to take a picture so I took it inside.  Teena has a chicken roasting in the oven so that is the only aroma I can sense at the moment. This ale is very malt forward. It's slightly sweet and a little creamy. A very nice brown ale.

This will definitely be a stop for me when heading down or back to see my family in Madoc! 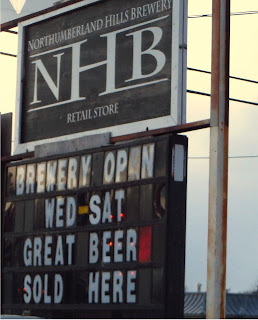