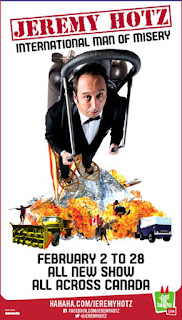 Tonight Teena and I were at the historic Massey Hall (best place in the city to see any concert) to see Jeremy Hotz and his International Man of Misery Tour.

Fighting his way across the frozen tundra and battling the evil elements, Jeremy Hotz will pit his wits against the harsh Canadian winter with his all-new stand-up show, Jeremy Hotz: International Man of Misery, from January 29 to February 28, 2016. The tour will have the lovably miserable comedian brave the cold once again to entertain audiences nationally from coast to coast, from Newfoundland to British Columbia. With the holidays just around the corner, these miserable show tickets make a great gift for your loved ones!

Hotz is Teena's and my favorite comedian and this is the second time we have seen him live. The first time was in 2008.

He worked the audience fabulously, and kept a dialogue going with a 14 year old kid in the first balcony. Sometimes, as he seems to be unscripted, his material will wander, but in a hilarious way. Nothing seems to fall flat in his show.

I've recorded his retrospective show from  the Comedy Network, watch him when ever he he on TV, but he is never as funny as he is when you see him live.

I laughed my ass off and had tears coming down. Teena and I would go see him again in a second!

This bit wasn't in our performance tonight but it this bit shows how he can work a crowd.


Another that was not in our show, (this one is from Sydney), but is hilarious!

Labels: Comedy Shows, Live Theater, Things to do in Toronto