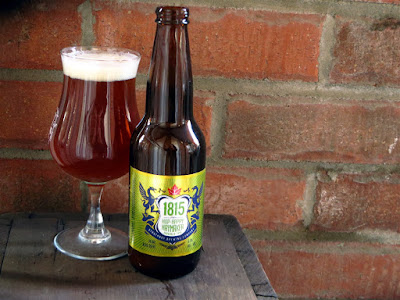 I reviewed a beer 1812 Independence Pale Ale from Strathroy Brewing in October of 2014. In this month's Beer of the Month package came another from the same brewery, 1815 Hop-Happy Haymaker Double IPA.

Strathoy Brewing opened in August, 2014, in a historic old flour mill that has been around at least since the 1930s. It is a very War of 1812-themed company with its website containing a Heritage Minute by Historica Canada, that used to air on between shows on TV, on an action during the War of 1812.

The beer pours amber in colour with an off-white head. It is cloudy, with some yeast residue left in the bottom of the bottle due to it being bottle conditioned. Bottle conditioning is where the brewer adds a small amount of yeast to the bottle to allow additional fermentation and matures the beer while in the bottle. This gives the beer a more character and flavour, and natural carbonation.

There is a little citrus in the aroma and lacings are left on the inside of my glass as it empties. The Hop-Happy starts with a citrusy bitterness, perhaps a little grapefruity, which intensifies into a very nice long finish. At 5.5% I wouldn't call this a double IPA, as they usually begin around 7.5% APV, but I would call it delicious.

The only shame is that it currently not available at the LCBO. Hopefully in time it will be.