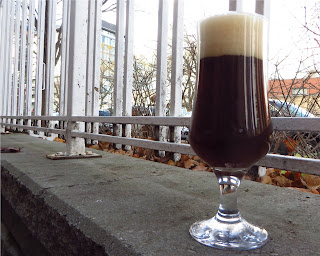 I met Rob a few years ago at a fencing tournament in Kingston. We have some interests in common including fencing and beer.

Yesterday we were both fencing in a tournament in Newmarket. Usually we have close matches but he took me apart in the direct elimination match 10-1. I forgave him for the drubbing, though, as he had brought with him a couple of bottles of an English Brown Ale that he had brewed.

Now not only is Rob a home brewer but he also grows his own hops on his property. He has vines that are three years old and five years old. The hops in this English ale are from his vines. Talk about the 100 mile diet. 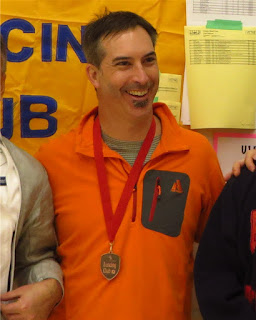 It was a busy day and I didn't have too much time to talk to Rob (above) about this beer. He had some kids he coaches in fencing with matches coming up and I had to hit the road to get home, as Teena and I were heading to Hamilton for supper with my son, Ken. So we hustled out to his vehicle, just as it was just starting to snow, where he gave me the beers, and we headed off our separate ways. Rob did have time to  explain how I was to keep the beer cold and give it a day to settle, which I did.

I admit that I was a little nervous in trying this. What if I don't like it? What if it is a well-made beer but not my style? Turns out I had no need to worry.

The English Brown pours, as its name explains, brown in colour, with a light brown foamy head. As it is an unfiltered beer, it is cloudy and there is a little bit of sediment left in the bottom of the bottle. I notice a bit of caramel in the aroma. 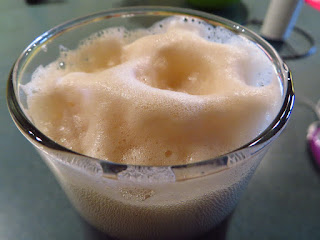 Normally I find brown ales a little on the sweet side but not this one. My sip starts with a hint of sweetness before all those fresh, homegrown hops come through. The ale finishes with a nice hop bite, not overpowering but very enjoyable.

Rob had asked me for a true opinion and if I had some suggestions to improve this. I really enjoyed this beer and have no suggestions as I love it as it is. The only thing I can say, Rob, is that I wish you had brought me more than just two!

I just started the second and am really enjoying it. Thanks Rob!