Beer of the Week - Santorini Blonde Pilsner from Volkan Brewery 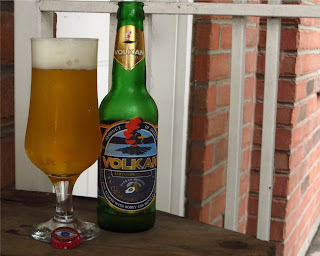 In my latest Beer of the Month delivery, I received three Santorini Blonde Pilsners from Volkan Brewery in Greece. It seems that there is a lot to write about regarding this particular lager.

First, let's start off with the owner Peter Nomikos, very much a Greek nationalist. His Santorini line of beers contain 100% Greek ingredients but more about them later. Greece has been in the news for the past five years regarding their debt. Nomikos, opened the brewery in 2011 and also started Greece Debt Free.

GREECE DEBT FREE (GDF) accepts donations for the purpose of buying Greek government bonds in international markets at prices much lower than the amount owed by the Greek government. GDF will then help reduce the debt through the cancellation of these bonds, helping to reduce the Greek national debt to sustainable levels.

Volkan Brewery donates 50 euro cents for every 1 euro of profit it makes to GDF and this is on top of the taxes it already pays. That is surely putting your money where your mouth is!

Now to the ingredients in this beer. Although the brewery is located in Argos, Greece, its ingredients come from the Greek islands of Santorini and Naxos.

Santorini honey is a very rare ingredient and only harvested once a year. Santorini has a very dry climate and volcanic soil. As flowers only bloom for a very short time in winter, the bees must feed on pistachio trees, fava beans and grapevines. At the end of summer, though, vintners of the islands sweet wine leave out tons of grapes to mature. The bees love it and feast on them creating a grape honey, one of the ingredients of this beer. 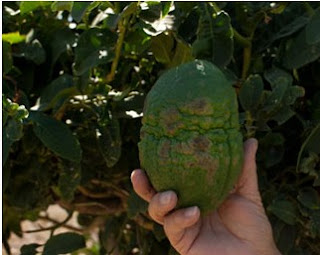 The other unusual addition to the Santorini Pilsner is Cirtus Medica. This species is so old that its seeds have been discovered in Mesopotamian excavations from sites dating to 4,000 BC.

Citron, often green when ripe, has very little juice but a powerful aroma and taste, distinct from other citruses. The citron essences for VOLKAN brews are harvested by local artisans from the roughly two thousand trees remaining on Naxos, using methods that date back several centuries.

Until now I have never heard of it, but it's in this beer, the first beer in the world to use this fruit.

The beer pours golden in colour with a nice white head, which took its time in dissipating. When it comes to the aroma, there is an added feature. At first a little grassiness comes through but is followed by something I have never smelled before. It must be the Citrus Medica. It's not a bad thing, just different.

As I knew there is honey in this, I was surprised that it was not a sweet lager. It also lacks that crisp hop bite that usually finishes a European style pilsner but this is not a bad thing. The beer starts like a light lager but then, after maybe just a second, the flavour of the Citrus Medica makes itself known. It actually is a very nice taste, a little sour, not overpowering, but quite different.

If this was available in Ontario, it would be a regular visitor to be beer fridge. Right now I can only enjoy the two that I have left.