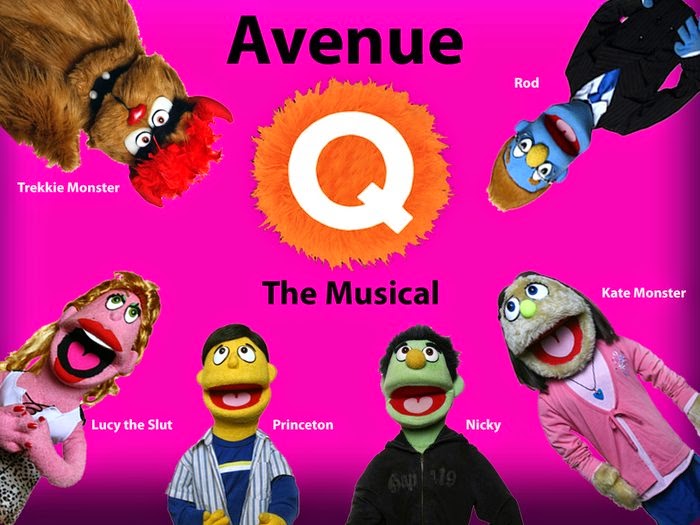 Tonight Teena and I saw Avenue Q at the Lower Ossington Theater.  The theater is in our neighborhood and this is the fourth performance we have seen there. They have all been very good.

AVENUE Q tells the story of Princeton, a bright-eyed college grad who moves to NYC with big dreams and a tiny bank account. The only apartment he can afford is way out on Avenue Q, where everyone’s looking for the same things he is: a decent job, a stable relationship, and a “purpose.” Eventually, Princeton learns to embrace the ups and downs of city life and realizes that “the real world” isn’t so bad, after all! *Not intended for children.

Although it has many puppets in the show, let me repeat that last line again ... NOT INTENDED FOR CHILDREN! There is swearing, sexual innuendos, and yes, even sex! I enjoyed it all.

Avenue Q has been a regular showcase at the theater for a long time and for that reason I always thought the theater was for young people. The play is very adult and funny while at the same time addressing diversity and racism. In fact, one of the songs was called Everyone's a Little Bit Racist.

Two criticisms. One is that there were times the music overpowered the lyrics and the second would be, and it might have been for this one performance, was at times one person would be working the puppet onstage but the voice of the puppet would be coming from another.

It's kind of a puppet show as there are live actors and actors with puppets. I really enjoyed how the actors took on the role of the puppet they were holding with the same facial expressions and emotions they shared with their puppet character.

If you don't understand the last line then you should see the play. You'll not only understand what I'm saying but will have a great time.
Posted by Swordsman at 22:30