Play - Life, Death and the Blues 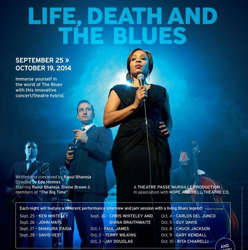 Tonight Teena and I went to see Life, Death and the Blues at Theater Passe Muraille with our friends, Malcolm and Mary.

“Life, Death and The Blues argues for us to see The Blues as an international art form that belongs to all of us; an art form that we all need to keep alive,” says Artistic Director Andy McKim. “Raoul and Divine definitely keep the music alive by leading us deeper into the personal, passionate, social and sexual world of The Blues.”

This innovative concert/theatre hybrid, created by Gemini nominated actor and Maple Blues Award winner Raoul Bhaneja, is a performance that combines autobiography, interview, live music and multi-media to explore the power, passion and meaning of The Blues.

Under the direction of Eda Holmes, Bhaneja will be accompanied by the Juno award-winning Canadian R&B/Soul singer Divine Brown with music provided by band members - Jake Chisholm on guitar, Tom Bona on drums and Chris Banks on upright bass.

Each night will feature a different performance interview and jam session with a living Blues legend!

I found that the story in the first act was all over the place. Divine Brown has accused Bluesman Raoul Bhaneja that he may play the blues but the blues are not a part of him. The blues are not in his heart. He is not authentic. From there,the story just wanders. One part of the story that had me quite confused was how he went on and on about rapper Bad News Brown being shot and killed in Montreal. Obviously Bhaneja was a fan of his but what that had t do with the blues or the story was beyond me.

The music is fabulous. Bhaneja blows a great blues harp, I haven't heard one in years, and Divine Brown has just an amazing voice.

I enjoyed the second act which had more singing and playing and less talking. Divine Brown has two solos which blew me away.

Every night features a jam session at the end with a local blues artist. Tonight was Jay Douglas. He is Jamica born and has played Toronto since the sixties. To say he was great would be an understatement.

If you're going to see the play, expect excellent music and not much more. 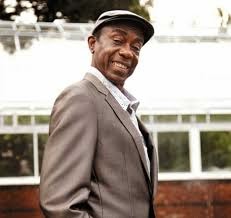