Fencing in Veterans Sabre at the Toronto Open 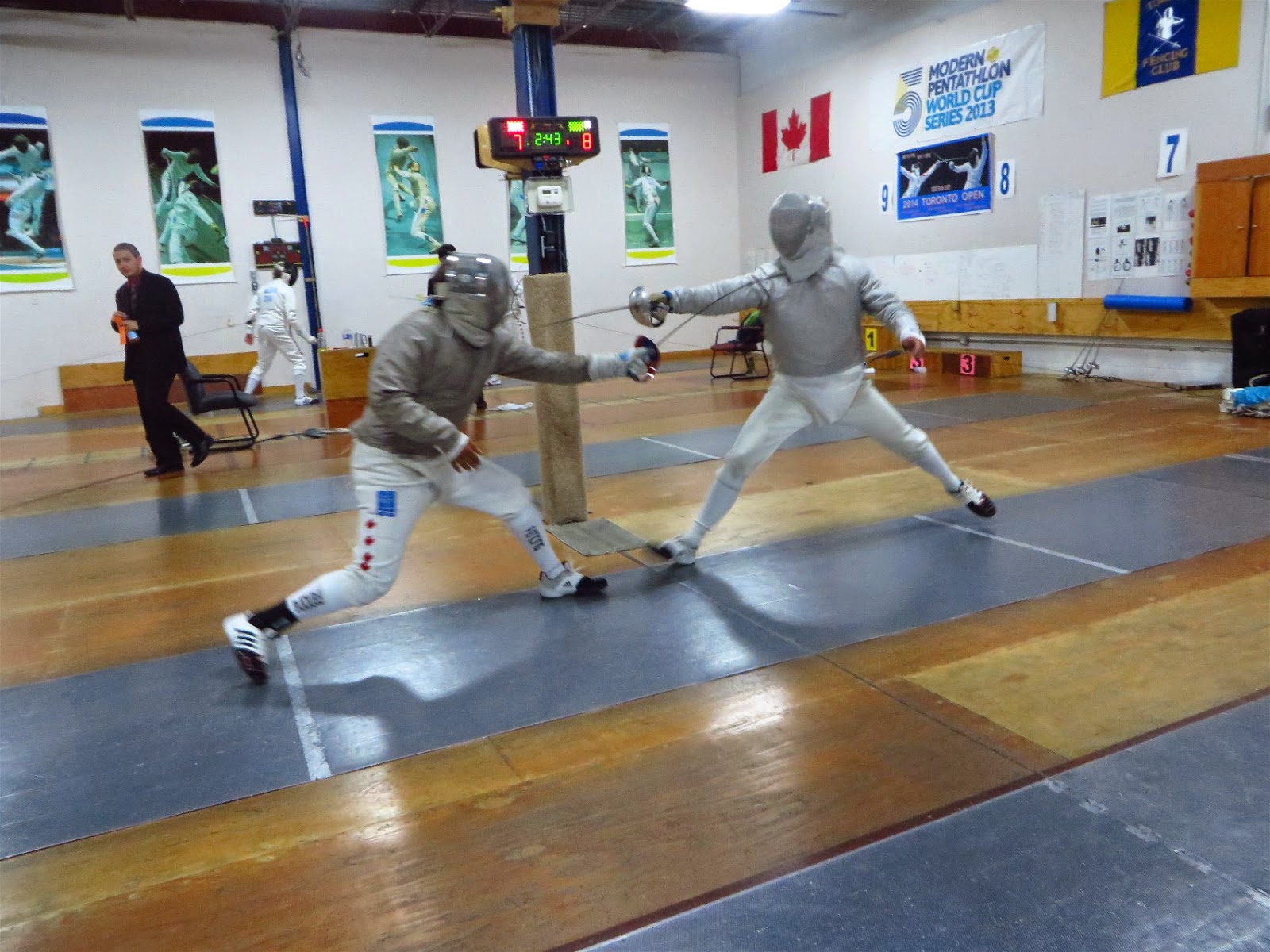 Above is a shot of the Veterans sabre final at the Toronto Open, sanctioned by the Ontario Fencing Association. I was not in it so I had some time to take a few shots. Vince is to the left and won the gold medal in a 10 to 8 thriller over Rob. Throat shots are never fun!

It was a disappointing turnout with only four of us showing up. Seven were signed up which still is a small tournament but would qualify for national points. A tournament of four does not. Still we were there to fence and have fun and that's what we did.

Here is a shot of a woman's epee match I took before I started to stretch and get suited up. 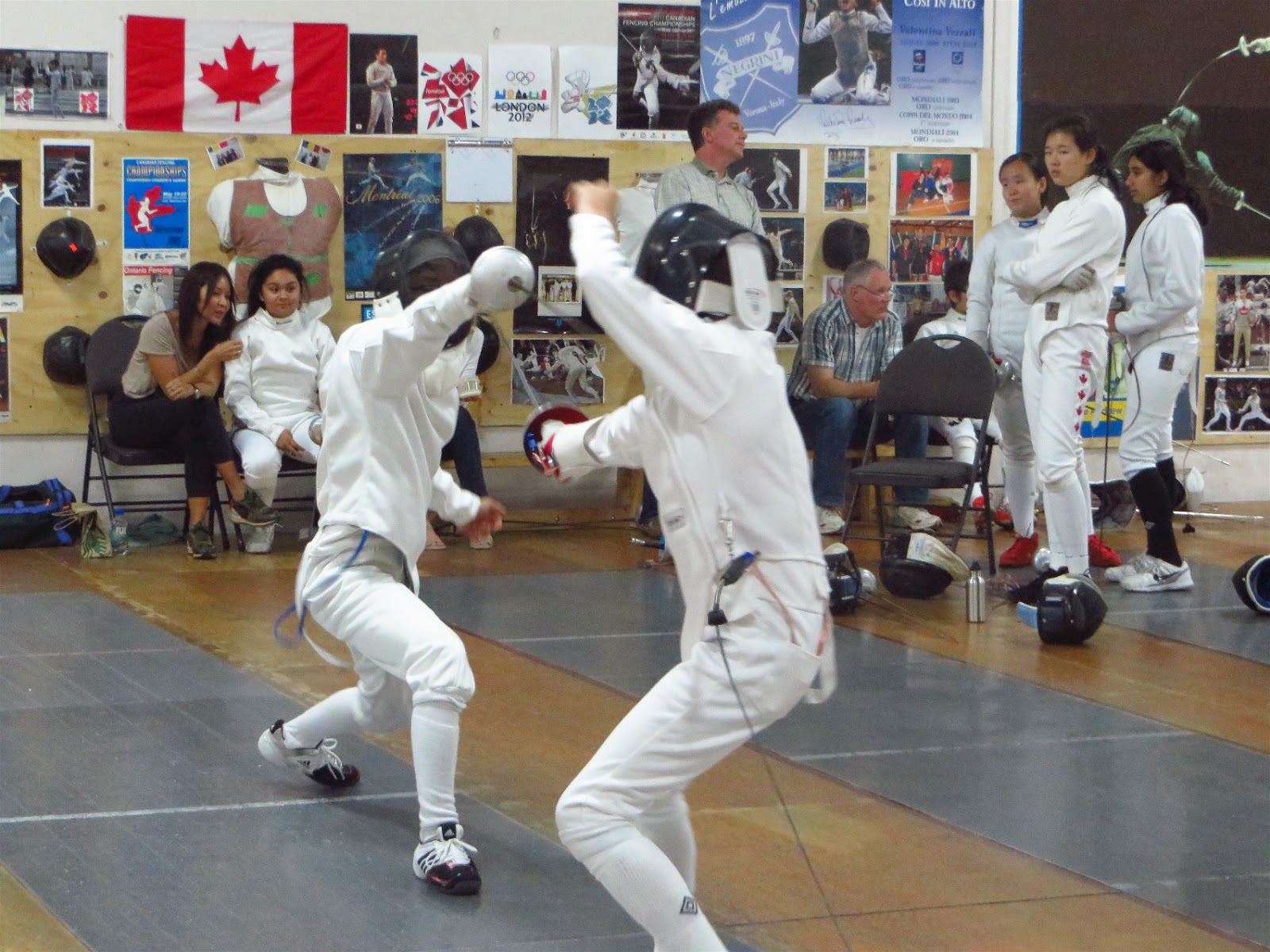 I was still a little stiff from fencing yesterday but took some Advil at home before I left and did a lot of stretching once I was there, and felt ready to go. Here is Vince and I. We have fenced out of the same club, Bladeworks Fencing Club, for years. 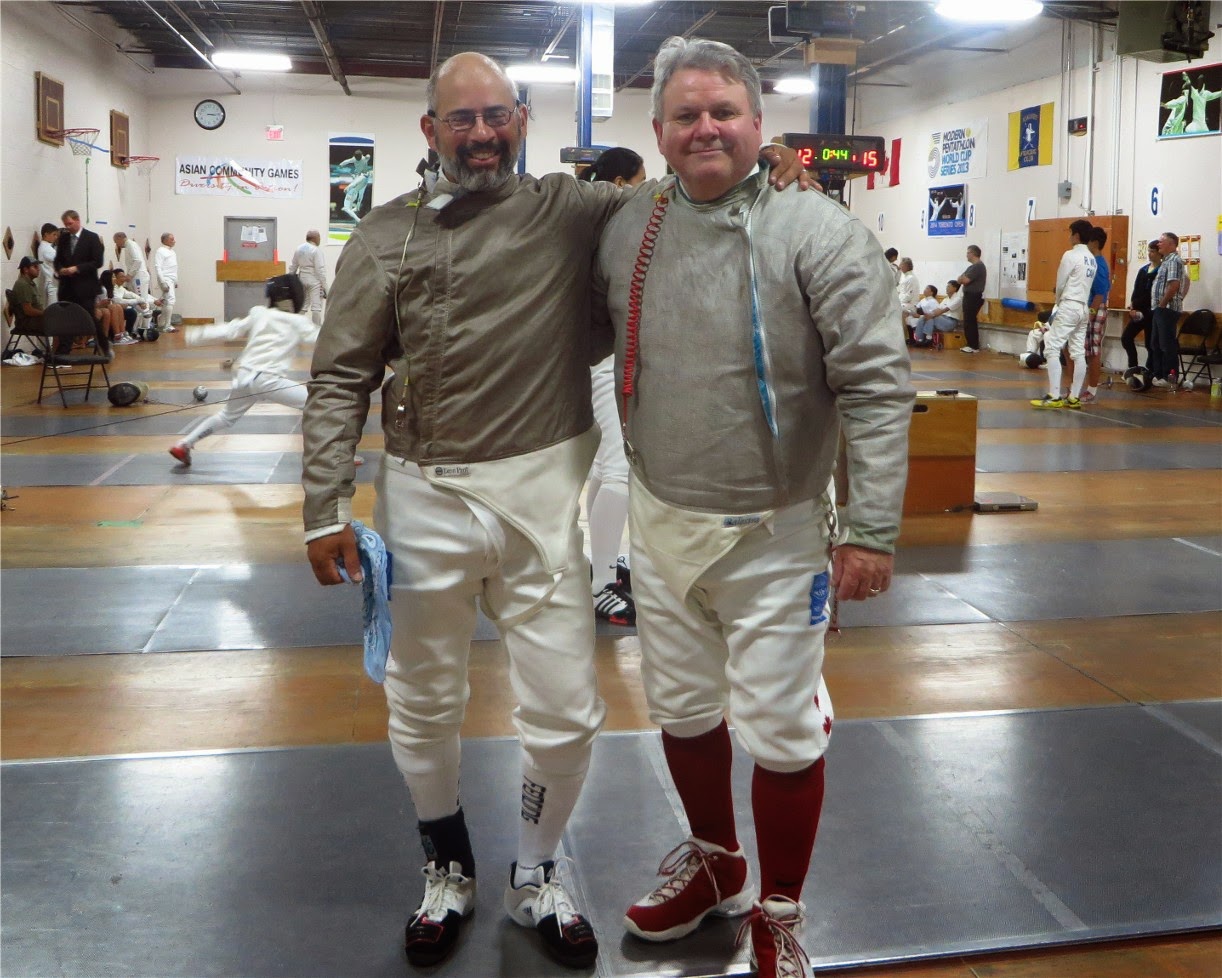 I had a bad day on the piste (fencing strip) and only won one match. Vince beat me twice by 5-3 scores each time, which is the same score he beat me by yesterday. I did lose two matches in the pools by 5-4 scores. Damn!

My DE (direct elimination) was against Rob who finished first in the pools. I did well in it. My attacks were controlled.  For the most part, I kept proper distance away from him.  My strategy wasn't bad, some execution, though, sucked and I need work on my defence when I am retreating.

Veterans DEs only go to 10 points instead of 15 (the rule makers has mercy on us!) and I was down 9-7. I came back with 2 good points but lost on that last point tie breaker. It was a great match to fence in and although I wished the results had of been different, Rob deserved the victory.

It was a fun weekend where I managed to work out some kinks in my game. I am so glad that I am back at it. Over the weekend, I fenced in 15 pool matches to 5 points, two DEs to 15 points and on DE to 10. Tomorrow I have a massage booked tomorrow with Jenn at RMT studio. It's well needed and well deserved!

Here are shot shots of the final between Vince and Rob. 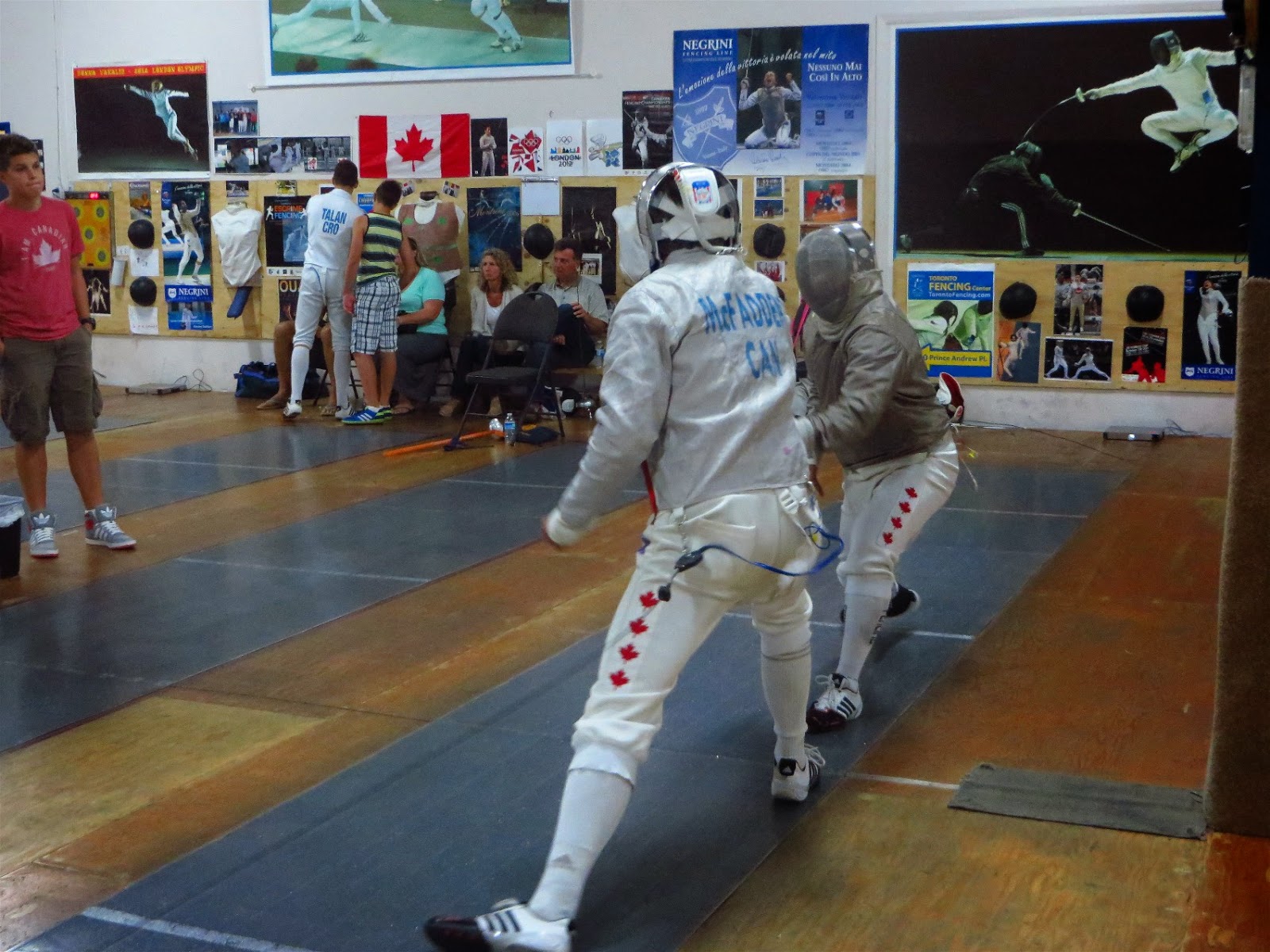 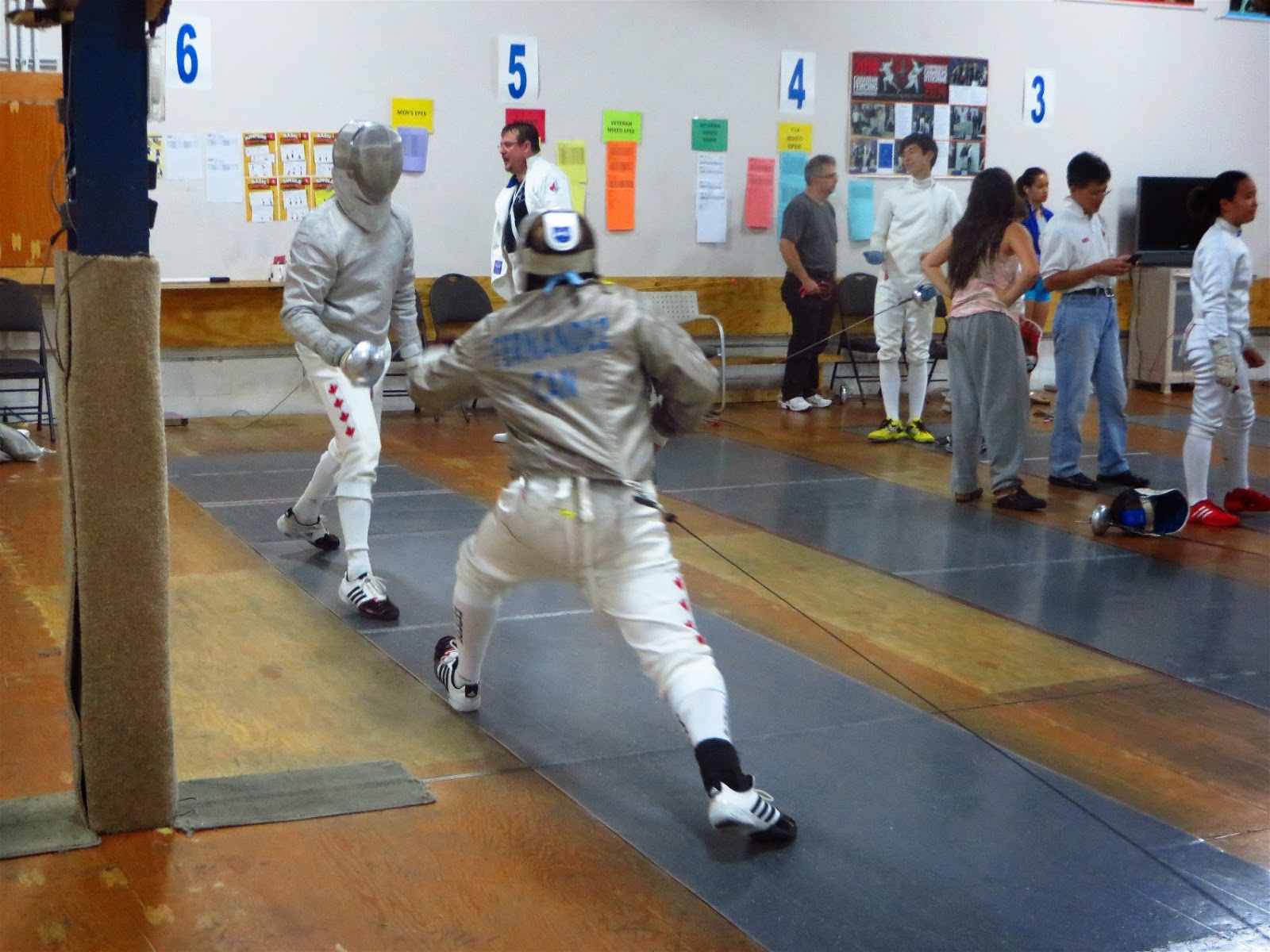 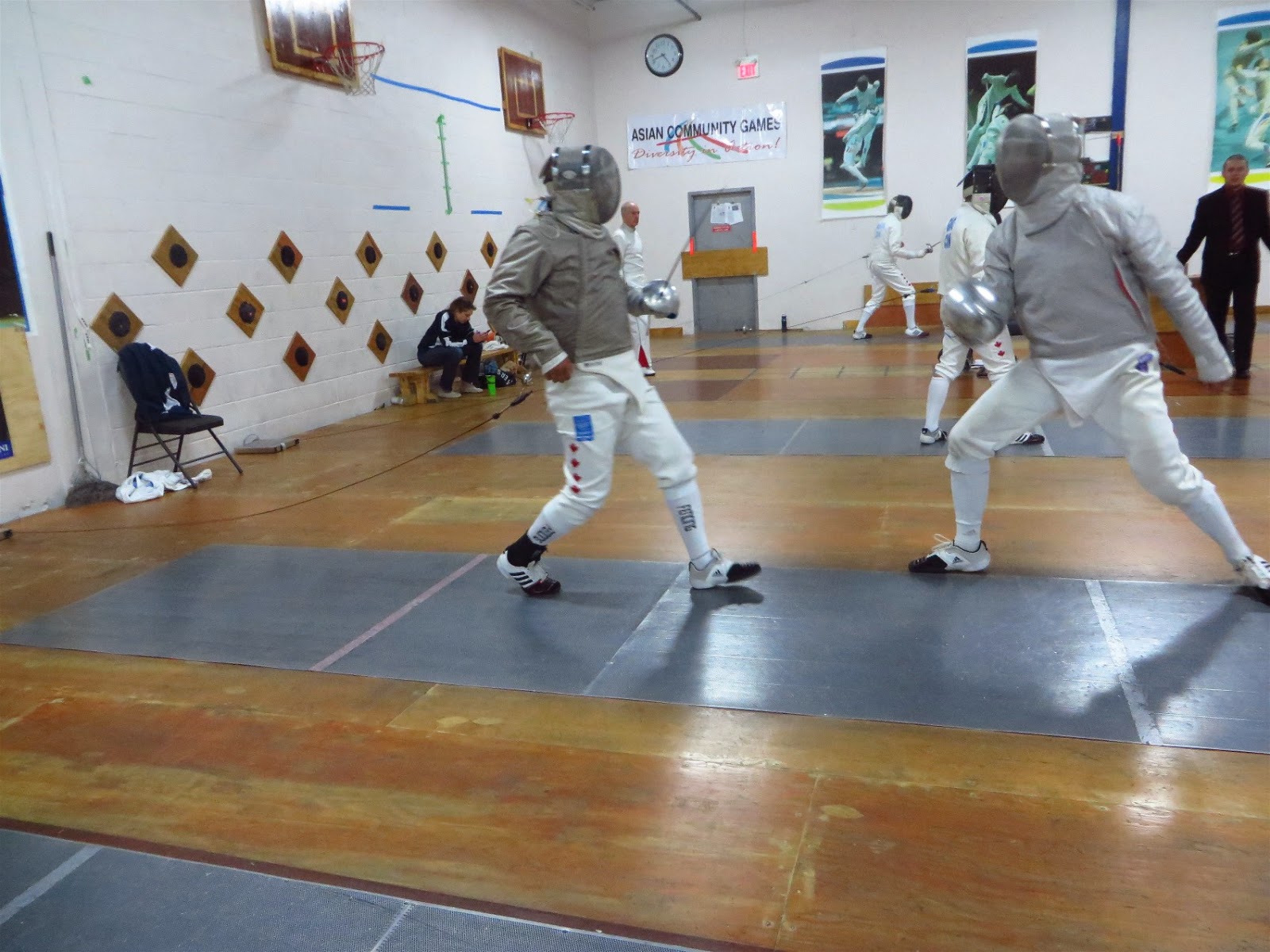 Great blog Gord. It was a lot of fun today. Very happy you are back. The Vet's are definitely better for it. Cheers. Vince