Supper at the Brewhouse in Fergus,Ontario 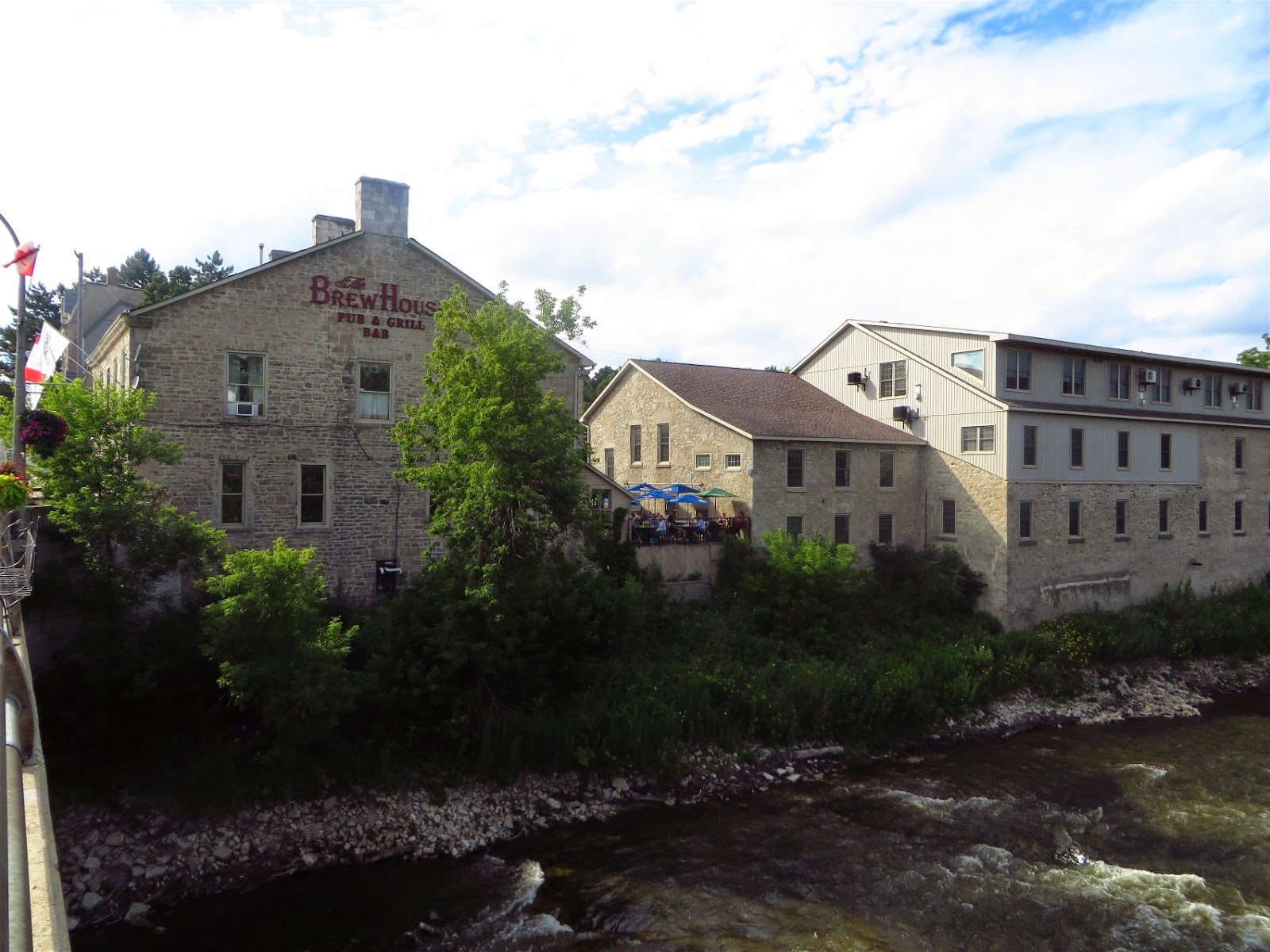 This evening Teena and I had supper at the Brew House on the Grand in Fergus. It is situated in a historic building overlooking the Grand River with a great patio! 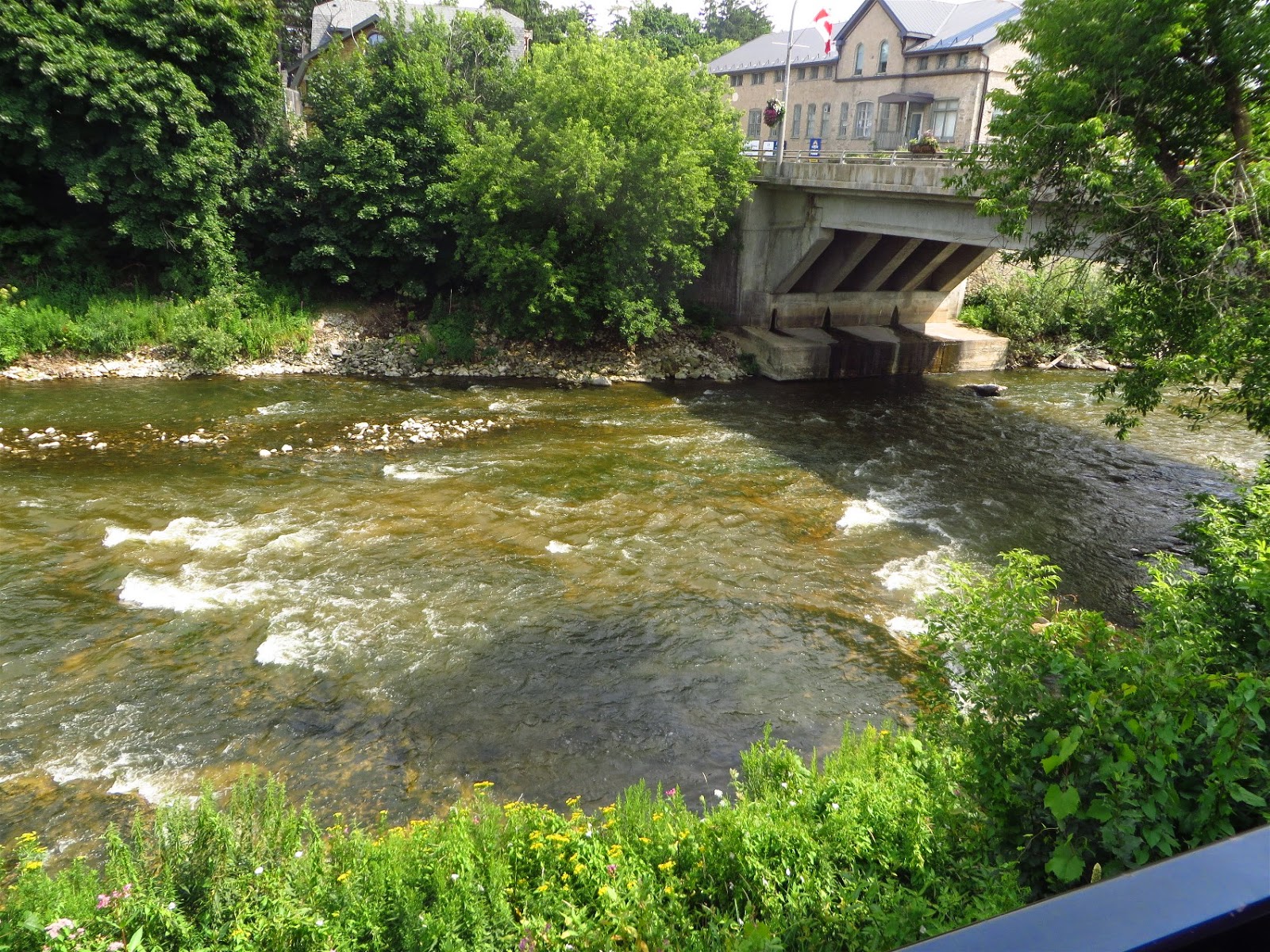 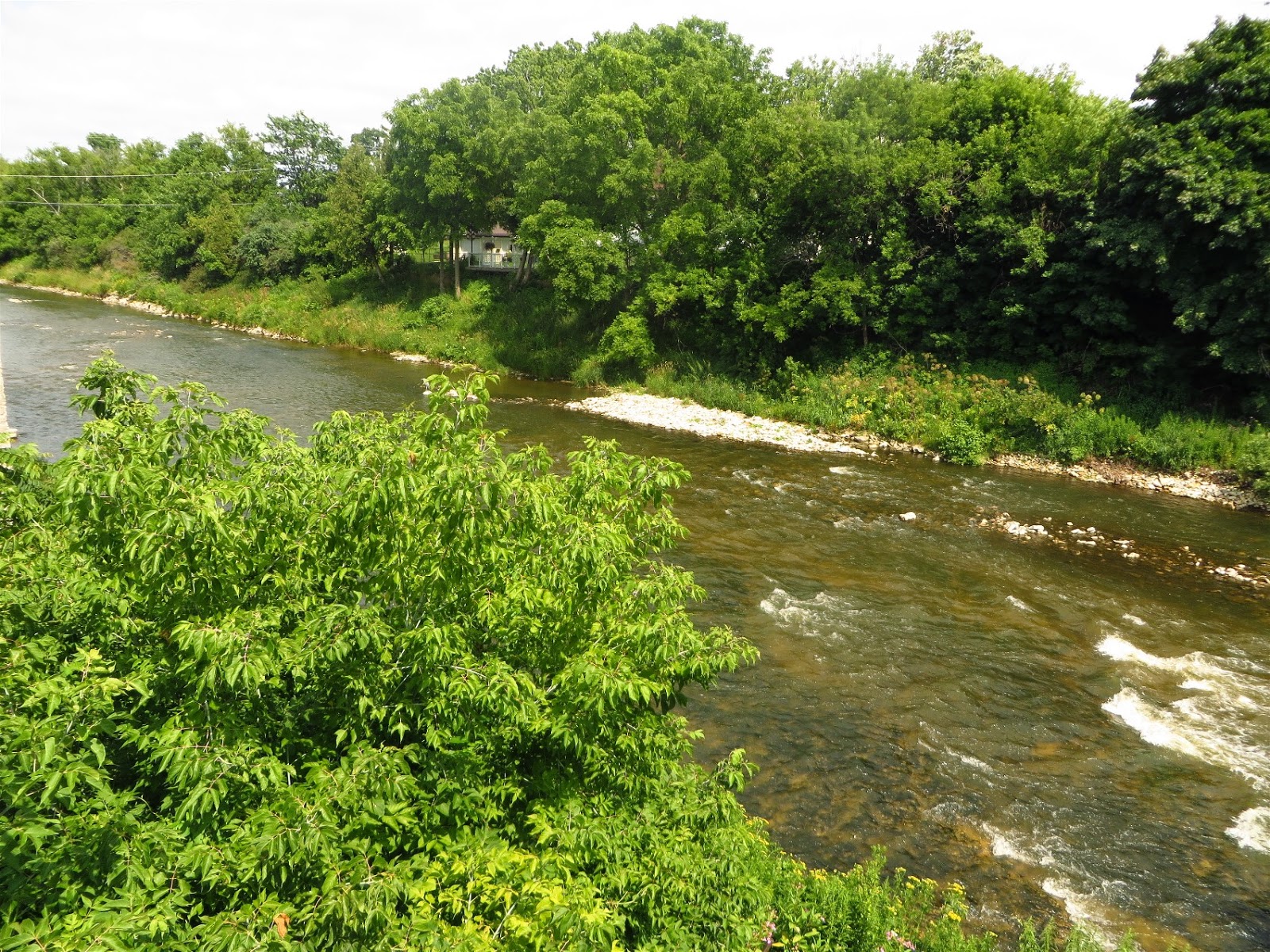 Too bad it was chilly with a wind so nobody was outside. Yesterday it was too hot and muggy to sit on the patio. Funny how that works. So we ate inside.

This vintage building is has quite the varied history.

The building was originally built as the home of Thomas Watson, the proprietor of the Webster Tannery, circa 1851. Dr. Abraham Groves converted the building into a flour mill after the tannery went bankrupt. He later installed two generators and steam boilers, converting the mill into a electrical generating plant in 1890, which provided power to his hospital, the lights along Main Street and a number of businesses in town. As far as is known, Dr. Groves was the first man to transmit electricity between two towns in Ontario when he extended service to Elora in February 1900. Ontario hydro took over service to the town in 1910.

The building has since served as Jack Twedle’s chick hatchery, the Fergus Police Department, the house of Brougham and eventually was divided into several smaller businesses and residential units. In 2000. the building was purchased by Carlos and Sidonia Madruga. Mike Mackay then leased and renovated to open the Groves Mill Brew House & Inn. The pub remained within his family until 2011, when the current owners, Katherine Brasch and Jim Silburn purchased the business from Claudia Hine. In 2011, the name change to “Brew House on the Grand” was in keeping with past name changes so that it will forever remain “The Brew House”, while celebrating the beautiful location on the river.

The inside is very rustic which I like with lots of exposed brick and an old fashioned fan assembly that I have only seen in one other place. I will say that for a place called the Brew House ... there should have been more craft beer available. I had a local Wellington Brewery Special Pale Ale (SPA) while I was there. 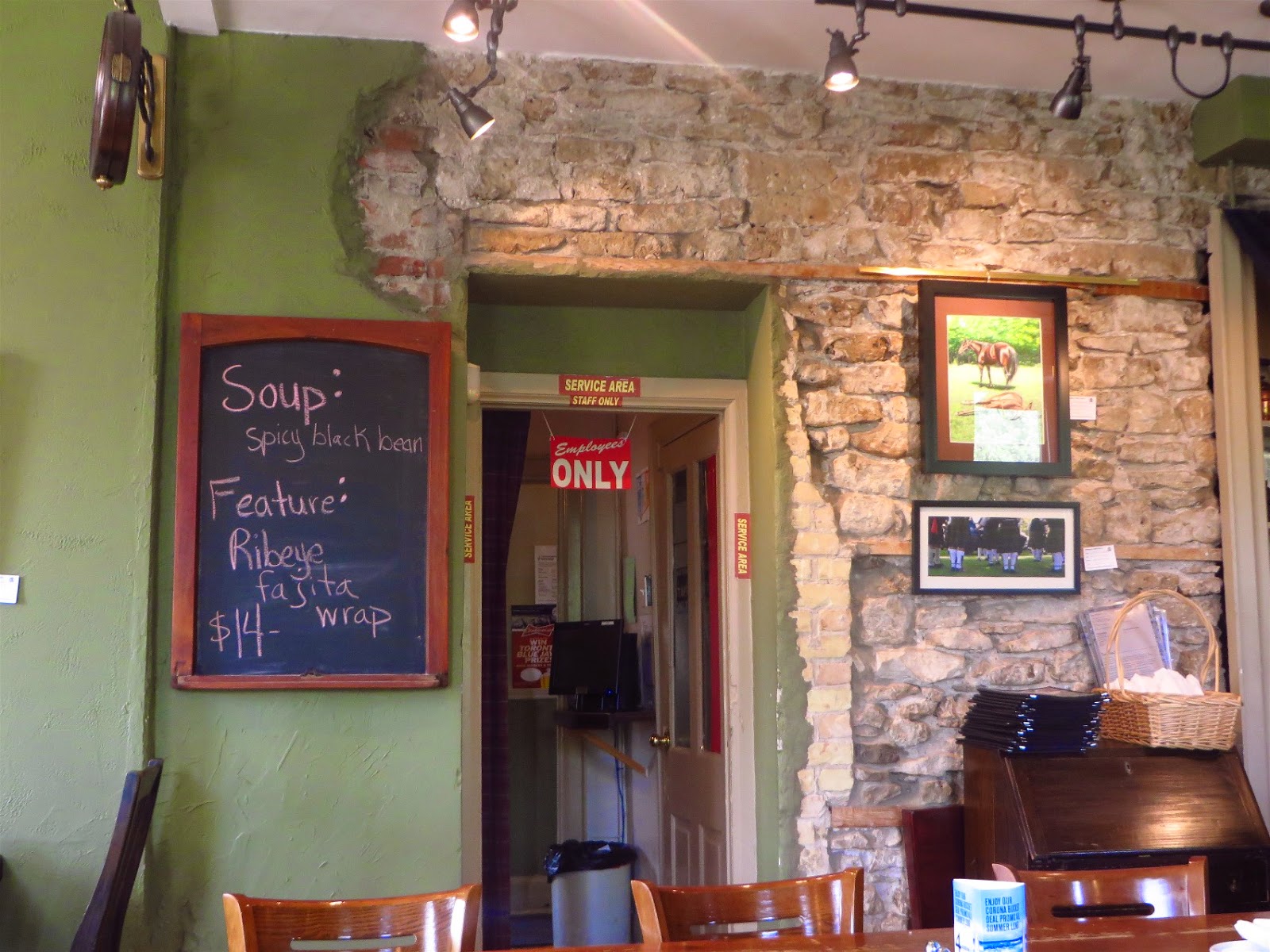 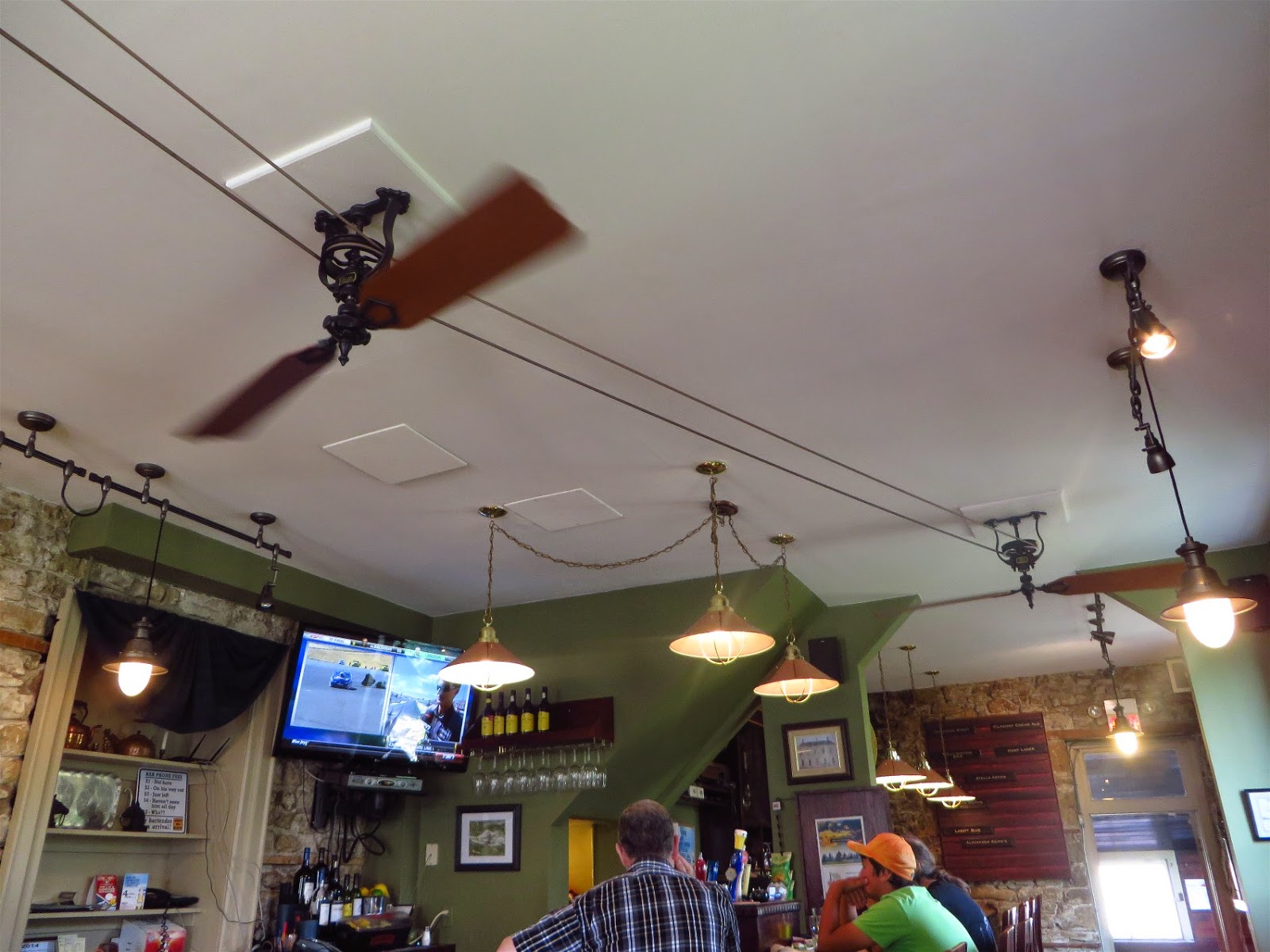 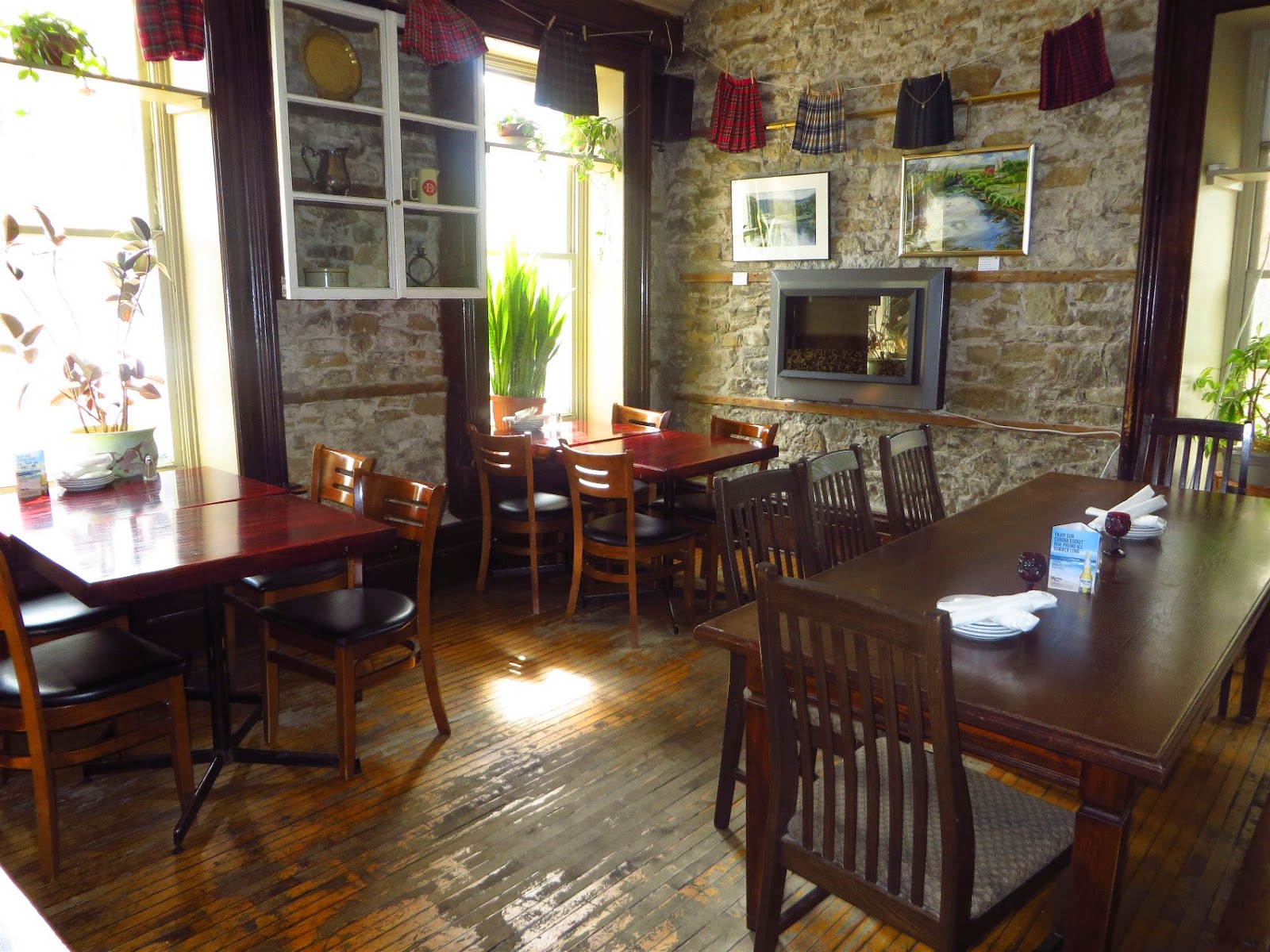 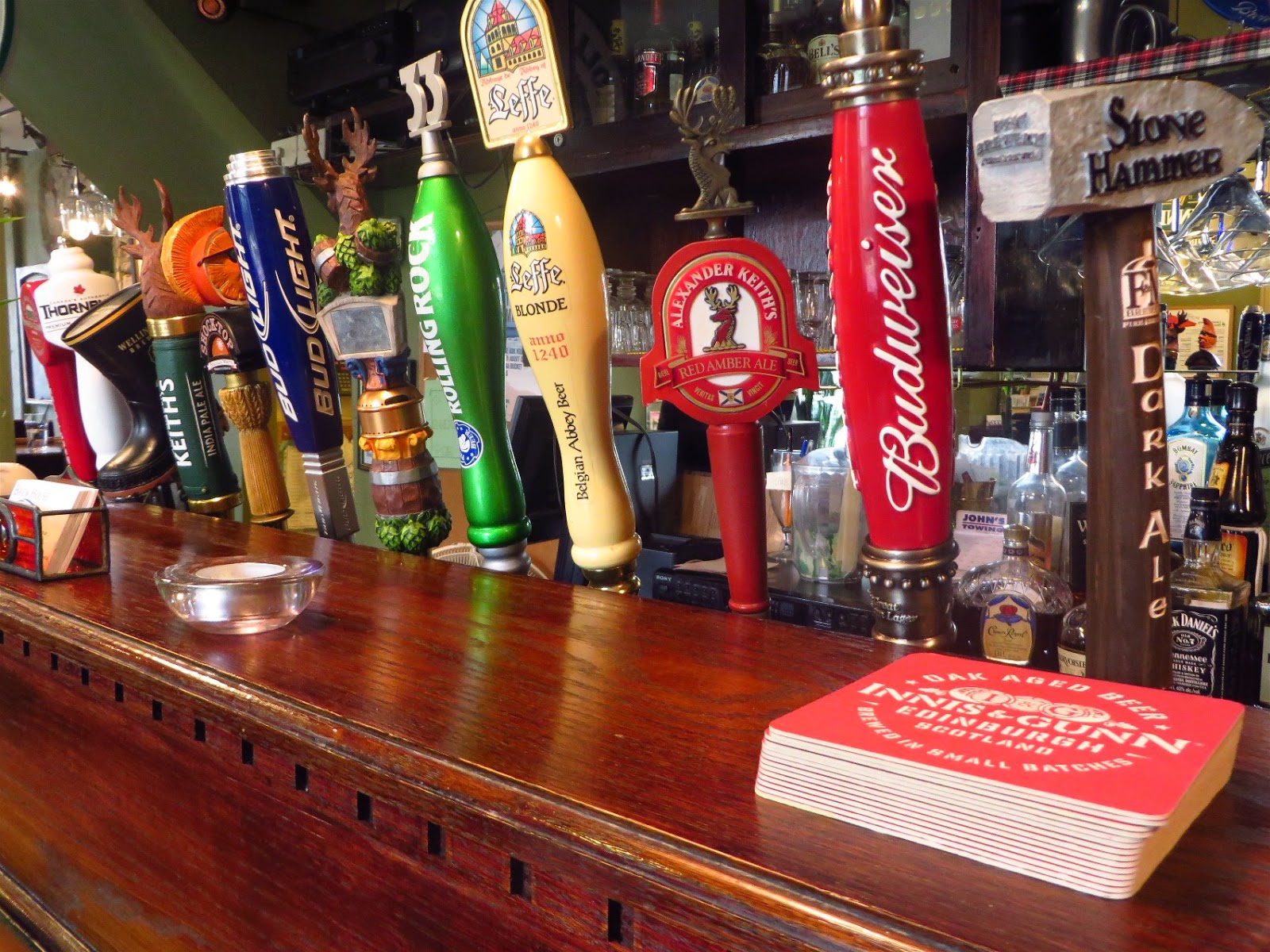 The service was great. We were well looked after. It is about the food, though. Teen a had the Curried Chicken Enchilada that has a sweet curried sauce. She wasn`t crazy about it and would not get it again. She found many of the flavours conflicting.

I started went completely of the board (above) starting with the spicy black bean soup. 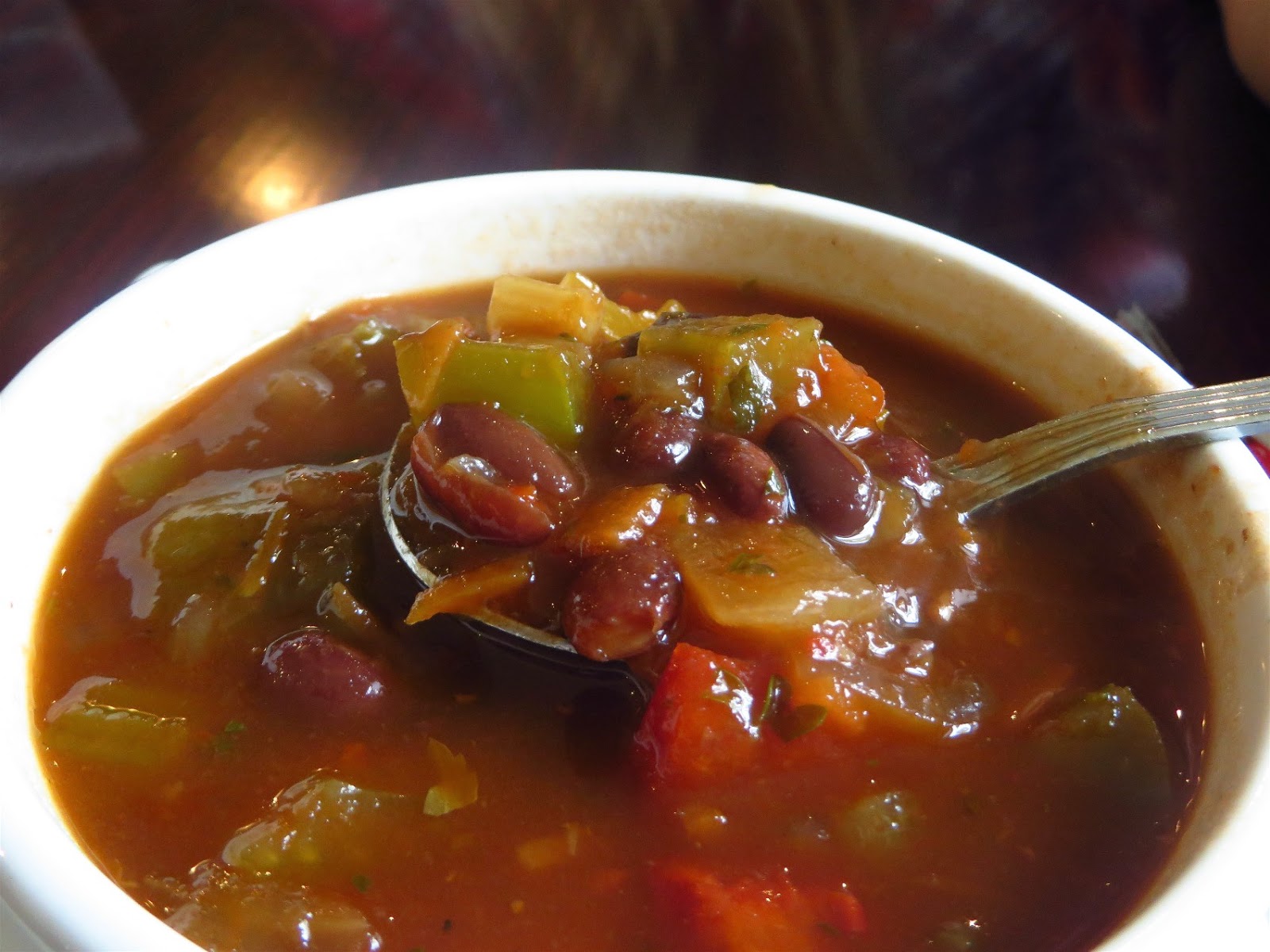 I love black beans but there were very few in this. It was full of spice and heat which I love, though. Spice does not like me anymore and as much as I thought it was delicious, I will likely feel it tomorrow (note to self: when an item on the menu says it is spicy, you may want to believe it!). I am glad I had it. Rarely do I have delicious heat anymore!

Next up was the Ribeye Fajita Wrap. It came with fries or a cup of soup. I ordered the bowl of soup and fries on the side here. I wish I had ordered the fajita with the soup only as the soup was hearty.

The fajita not only was great looking but delicious! I would order this, again and again! 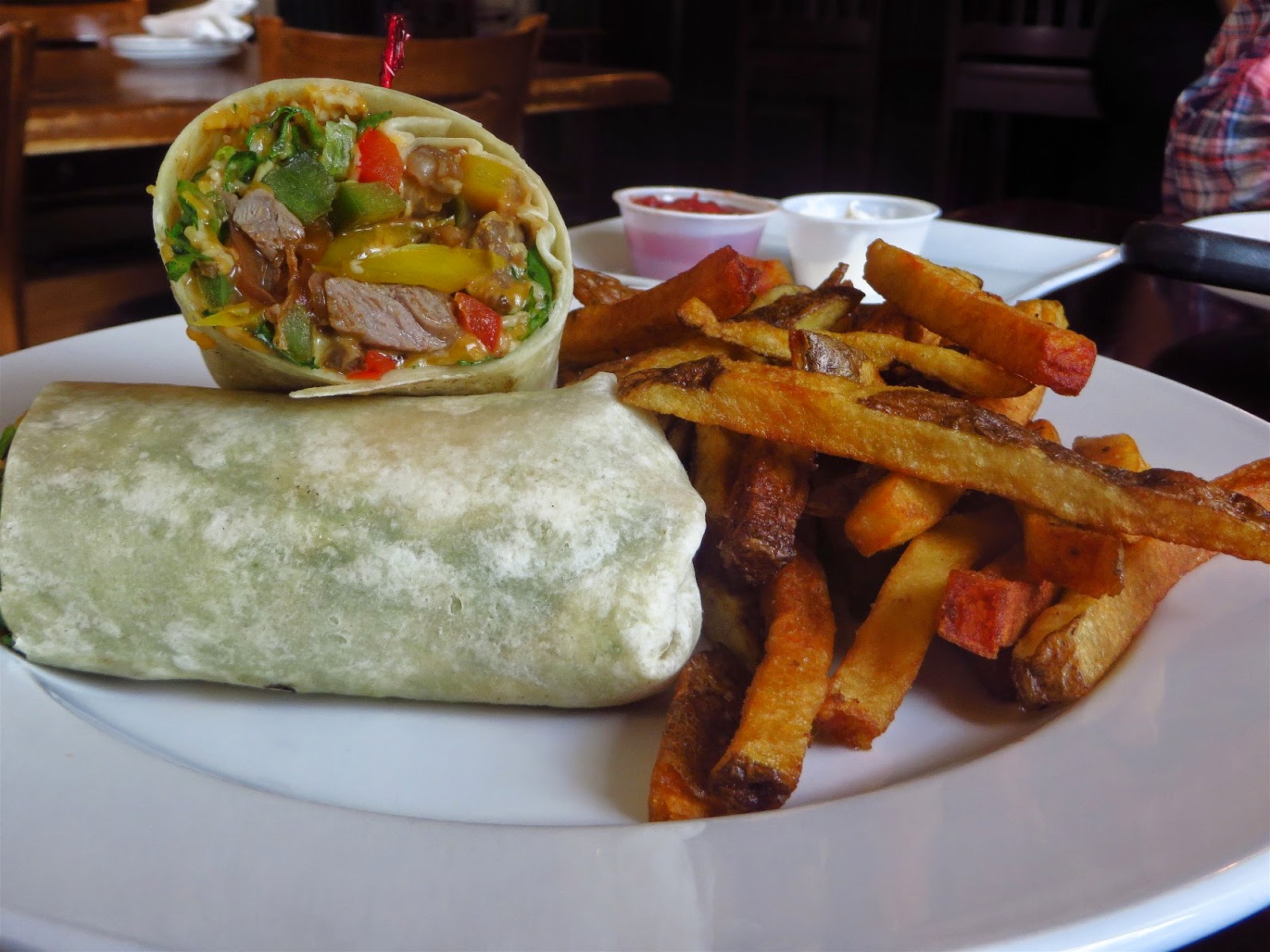 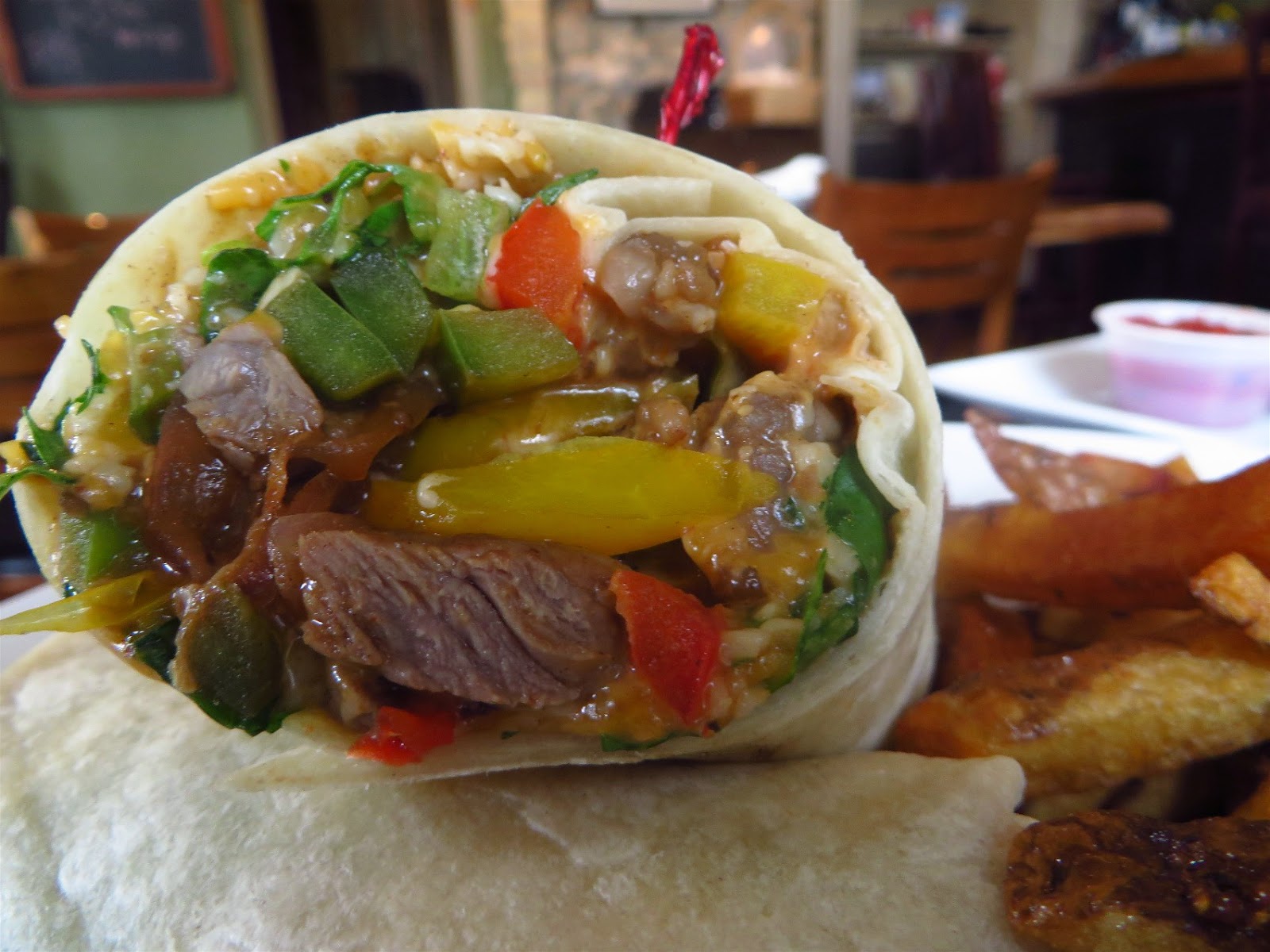 The Brew House on the Grand is a very unique and historic place. The staff was friendly, like you always find in a small town and the food was great. It is another place I would I would recommend in Fergus, especially on a nice sunny day out on the patio!
Posted by Swordsman at 18:00