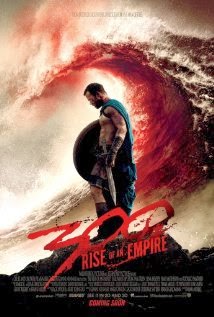 Last weekend was my birthday and my son Ken had to miss it due to work. That's not entirely a bad thing as instead, he took me out this afternoon for lunch and a movie, so my birthday celebrations continue!

It was my choice for the movie and I chose 300: Rise of an Empire. IMDB description of the movie is quite vague, so here is the one from CinemaClock Toronto:

Based on Frank Miller's latest graphic novel "Xerxes," and told in the breathtaking visual style of the blockbuster "300," this new chapter of the epic saga takes the action to a fresh battlefield -- on the sea -- as Greek general Themistokles attempts to unite all of Greece by leading the charge that will change the course of the war.

The movie pits Themistokles against the massive invading Persian forces led by mortal-turned-god Xerxes, and Artemisia, vengeful commander of the Persian navy.

I really enjoyed 300 and looked forward to this sequel. Unfortunately I found the movie quite confusing with a very muddled plot. This movie, like 300, is based on actual historical events. The problem is that the sequel is really not a sequel but according to History vs Hollywood,  is a prequel, side sequel and sequel all rolled up into one.

Finally, although the acting was good, the special effects, especially the 3D did not work well. You would think 3D would add to a movie like this, and it does in some places, but mostly was not well done. In fact in shots that had far away backgrounds, I found the 3D showed how the background was really a painting, something that blends in well with a regularly shot movie but not here.

If you must watch it, wait for it to come on TV. With HD TV, the effects will be the same or better, but nothing can fix the writing. A 4/10.

ken and I had a great time though and it was fun  seeing him. Thanks Ken! We should have gone to see Captain America instead!
Posted by Swordsman at 19:10