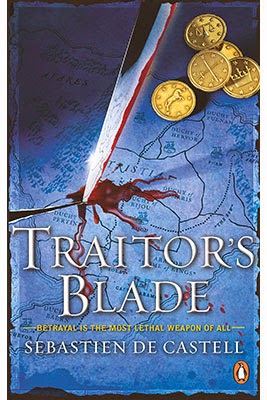 Have you ever read a book with a story so good that you hate to see it end?

That was the way it was for me with Traitor's Blade.

Falcio is the first Cantor of the Greatcoats. Trained in the fighting arts and the laws of Tristia, the Greatcoats are travelling Magisters upholding King’s Law. They are heroes. Or at least they were, until they stood aside while the Dukes took the kingdom, and impaled their King’s head on a spike.

Now Tristia is on the verge of collapse and the barbarians are sniffing at the borders. The Dukes bring chaos to the land, while the Greatcoats are scattered far and wide, reviled as traitors, their legendary coats in tatters.

All they have left are the promises they made to King Paelis, to carry out one final mission. But if they have any hope of fulfilling the King’s dream, the divided Greatcoats must reunite, or they will also have to stand aside as they watch their world burn.

This is the first book written by Sebastien de Castell who hails from Vancouver. I found it very action-packed, well written, and filled with twists and turns throughout the story.

I usually shy away from fantasies but this book, although set in a mythical land, draws much from the time of the 17th century, the period of time when the story of the Three Musketeers took place. That being said, this book is equal to or even better than the Alexandre Dumas story.

The book may be finished but happily, the story of the Greatcoats, led by Falcio val Mond, is not yet over. According to de Castell's website the next book in the series, Greatcoat's Lament, is now at the publisher. I can hardly wait for it to come out.

Thanks to Luanne from A Bookworm's World who posted her review of this book on The 7th Annual Canadian Book Challenge site in March. I too take part in the challenge as does Teena, and I enjoy having a look at what others have read. That's how I found this book and am very glad that I did.
Posted by Swordsman at 18:54