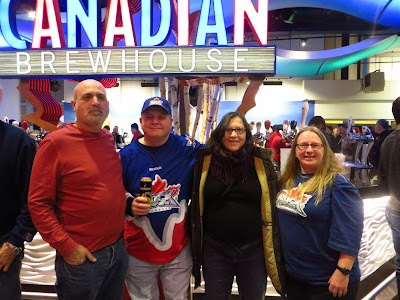 Teena and I have enjoyed every Toronto Rock game we have gone to (maybe not the playoff loss last year) so much that we bought season tickets this year. It's a great deal and comes with some extra tickets for friends. Tonight we went with some friends, Malcolm and Mary.

11,120 enthusiastic fans were there to great the Rock as they came into the arena to take on the Calgary Roughnecks! Team Captain, Colon Doyle, is always the last one introduced ... "Here's your captain, my captain, our captain, number 7, COLON DOYLE!" Here he is greeting his team. 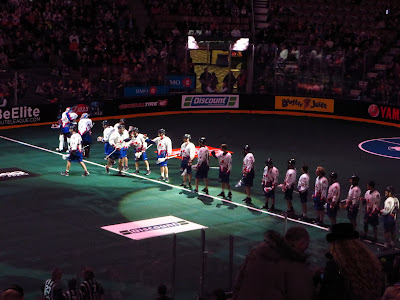 Scotty Newlands sings all the national anthems for the Rock home games and, as usual, tonight did a great job. He has such a terrific voice! 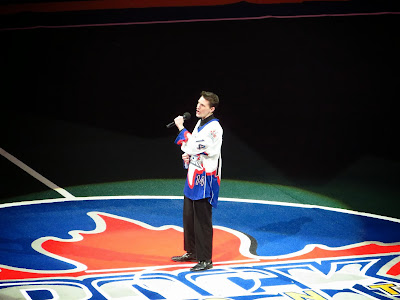 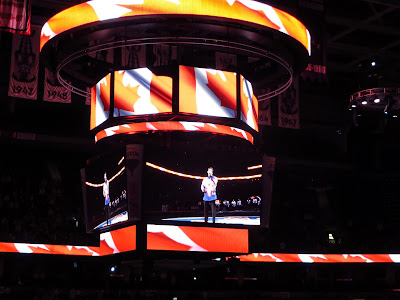 The opening face-off for the 2014 season! 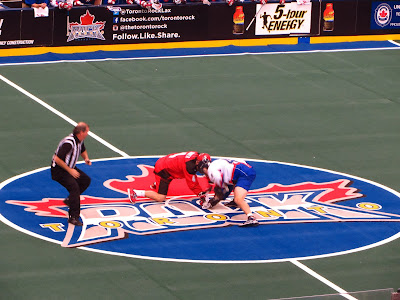 The Rock scored the first three goals of the game to take a 3-0 lead. Our section is quite fun as after each goal there are high fives all around. Hopefully my hand will become quite sore before this season is over. 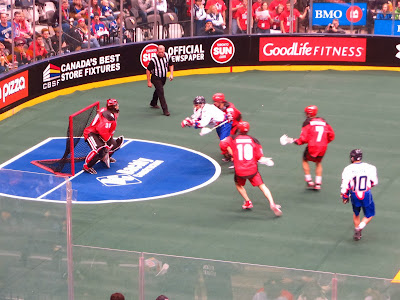 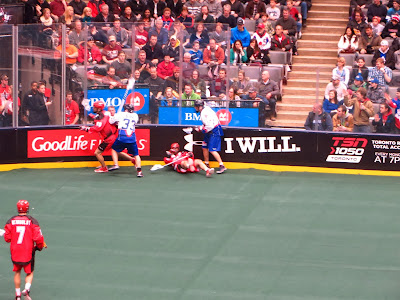 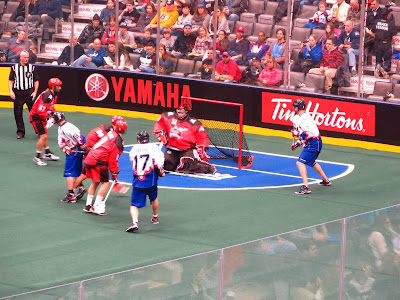 A shot off the crossbar ... and later another! 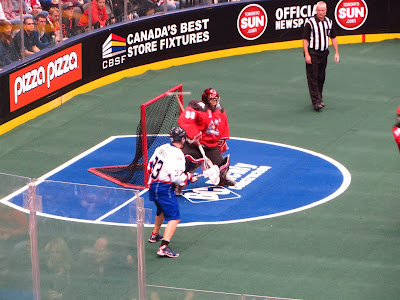 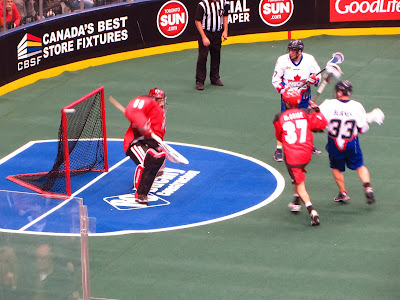 Here Nick Rose makes one of 40 saves of the night. 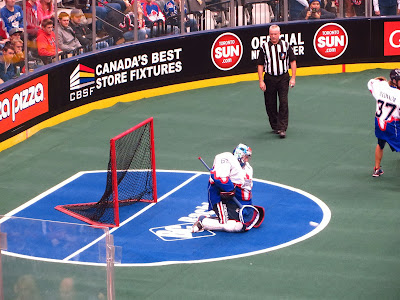 The Toronto Rock Cheerleaders made sure the breaks in the action was not dull. 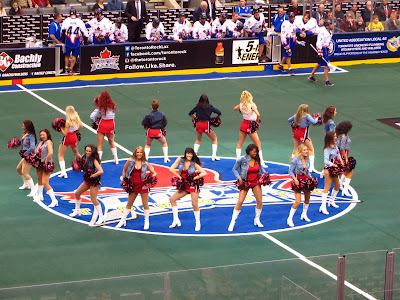 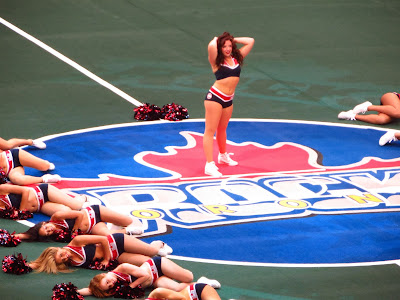 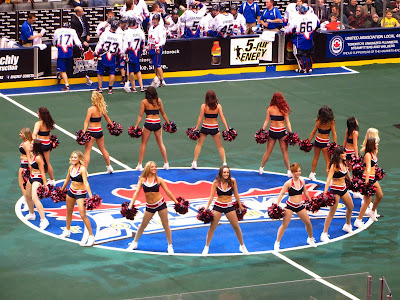 Some roughhousing in front of the Calgary bench. I could not believe Calgary did not get a penalty here! 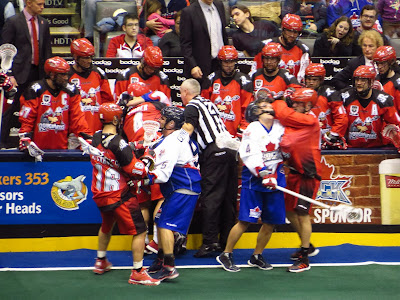 At the end of the third quarter. they have a contest. Two people are selected to come out and compete for a TV by spinning four times around a lacrosse stick and then completing a puzzle. Here is the winner in action. 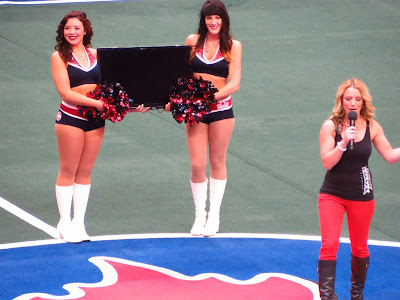 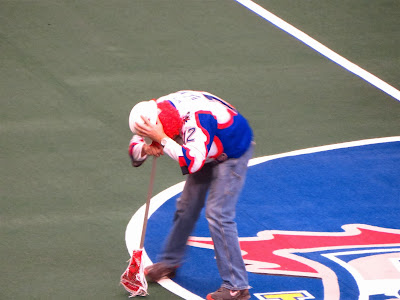 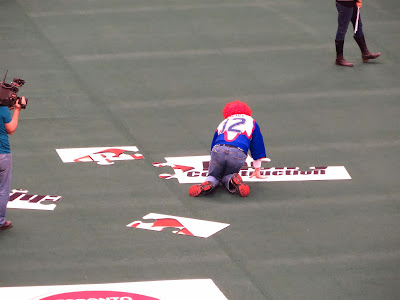 For a long while it looked like a Toronto Rock runaway but suddenly after having a 13-7 lead, Calgary popped in 3 quick goals. I was getting a little worried. More action 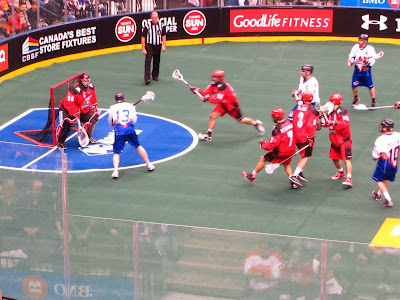 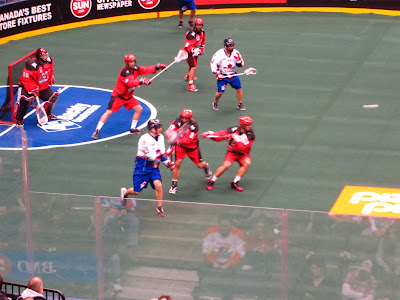 Iggy having fun with the fans. 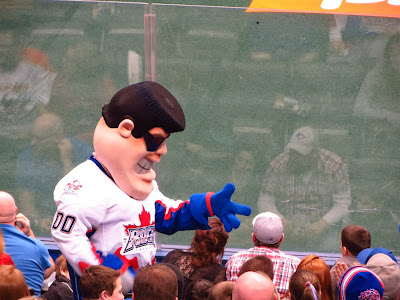 After Calgary closed the gap to just a three goal lead, the Rock took things into their own hands and in the end won 16-11. The fans loved it! 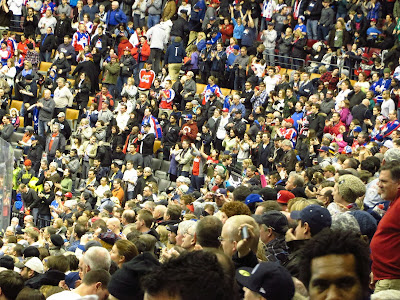 The victory lap where the Rock salutes their fans. 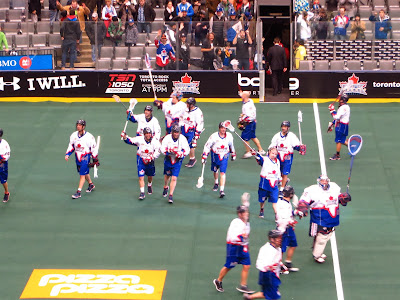 The three stars of the game. Stephan Leblanc scored five goals and Nick Rose made 40 saves to earn their place. I have no idea what Jeff Shattler did as really this is a post from a Rock fan. 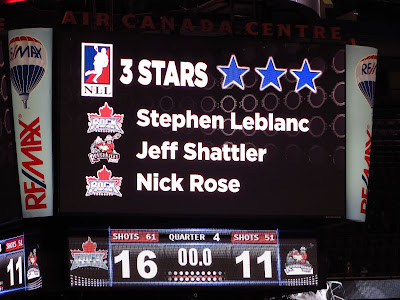 It was a great night and I am so looking forward to the Rocks game against the Buffalo Bandits on January 31!
Posted by Swordsman at 23:06