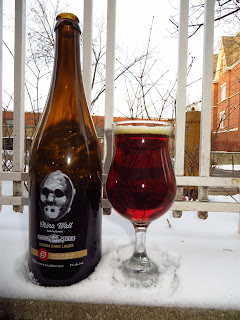 I have previously written about Lake of Bays Brewery when I did a Beer of the Week on their Pale Ale. At the end of the article I said, "Not bad for a new brewer in his early 20's. Nice start! I look forward to trying more beers from this brewery as they become available."

A few more have been released through the LCBO but I have not had a chance to try one, that is 'til now.

Teena looked after our neighbors' cat, Mabeline, and was given a bottle of wine for doing so. They also gave her a bottle of Lake of Bays China Wall to give to me. I like it when Teena looks after Steve and Simone's cat!

Uusually I am excited about trying a new craft beer and really hoping it is a great tasting brew, as I love craft beer from small breweries. This time, however, I am hoping it is great, because of the man the brew is named after, Johnny Bower, former Toronto Maple Leaf goalie and my all-time favorite goalie.

He was Toronto's goalie through the 1950s and 60s, played in 552 games, won 4 Stanley Cups, retired with a 2.51 career goals against average, ringing up 37 shutouts along the way. He was nicknamed "the China Wall" as not only was he a wall impossible to get a puck by in net, but also in hockey terms he was as ancient as the Great Wall of China. He was a 34 year old rookie for the Maple Leafs and didn't retire until he was almost 45.

The bottle has a picture of Bower in a mask, which is notable as Bower only wore a mask for his final 17 games. The bottle also features a description of Bower's career on the back and his autograph on the side. 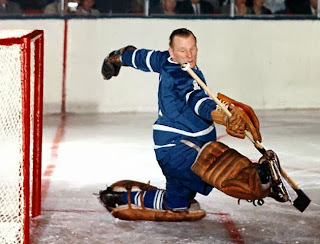 China Wall is a 7% Vienna Dark lager, which comes in a 750 ml bottle so is definitely brewed and bottled for sipping. Vienna Dark lagers are sometimes known as a Vienna Reds and are malty lagers, which was first brewed in Vienna in the 1830s.

China Wall pours brownish red in colour with a brownish head. The head takes awhile to dissipate. Strangely there were no lacings, so I rinsed another glass and poured the remainder of the bottle into it with the same effect. I figure it is the glass' fault and will be more diligent in cleaning them properly.

There is a nice aroma to this with the malt coming through.This is a full flavoured malt forward beer. There seems to be layers of flavour with each sip. It is not a sweet beer but neither is it hoppy. It is a very well balanced beer with a hint of caramel in the finish.

I am glad that such a delicious beer graces a bottle commemorating Hall of Fame legend Johnny Bower. Only 12,00 bottles of this were produced, so I'll need to hurry to pick up a few more!

Thanks, Simone and Steve!