Beer of the Week- Lake of Bays Pale Ale 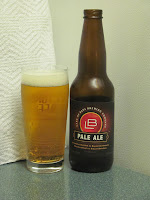 Last June Teena and I were at "Session - A Craft Beer Festival" where I had my first taste of a pale ale from Ontario's newest brewery, Lake of Bays Brewery from Baysville Ontario, in the beautiful Muskokas.

It was one of the first beer samples I had that day. Many Many beers were sampled that day and all I could remember about it, was that I had liked it at the time. When I was in the LCBO at Queens Quay the other day and saw they had six packs of it, I didn't hesitate to pick one up.

The picture on the right is from the companies website. It is an shot of Lea's Virgins Inn from Preston, Lancashire, U.K taken sometime in the late 19th century. Their claim is that it was owned and ran by Thomas Lea, who is the great-great-great-grandfather of Lake of Bays Brewing's President, Darren Smith. Must be in the blood as Darrin, in his early 20's started building his own brewery and store in September 2009 and had the official opening on May 20th of this year. 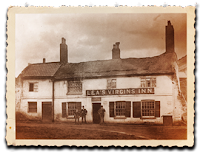 After many trail batches they decided to start with just one signature brand, their Pale Ale. And how is it?

I could not notice much in the aroma, but that might just be me. The first glass had a good head with no lacings, so I rinsed out a fresh glass and yes, a decent amount of lacings lined the glass when sipped. Figured it mus have been the glass.

There was a nice malt taste balance with some hops. Subtle hops did come through in the finish, which I enjoyed. sh. This is a nice and would be a good session ale.

Not bad for a new brewer in his early 20's. Nice start! I look forward to trying more beers from this brewery as they become available.
Posted by Swordsman at 19:02