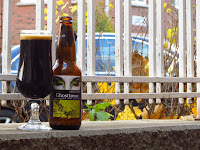 I would like to go back to Montreal for a few days, just to visit as many of their local breweries and brewpubs as possible. Until I do, I have to make due with what Teena brings back from her business trips to Montreal and what the LCBO imports. This week the LCBO had La Stout Ghosttown from Brasseur de Montreal.

The restaurant-brewery was opened back in 2008 and produces seven year round beer, plus seasonals. I had a look at the menu and yes, this looks like a,place I would like to eat!

Ghosttown is one of their year round beers and the only one in their line-up to be sold away from the brewery at Quebec SAQ stores. The Brasseur de Montreal website describes the 6.6% abv Ghosttown as an absinthe-based stout, brewed with roots, herbs and strongly roasted malt. A blend of a dozen ingredients, it develops hints of coffee and chocolate.

So what is Absinthe? A Toronto Star article describes this as Gin's naughty neighbor, and an opalescent, anise-flavoured elixir.

The stout pours very black in colour with a silky brownish head. There is a multitude of layered aroma in this. What hits you first is licorice. It is very pronounced. Then comes through a little chocolate, plus something else I cannot put my finger on. Must be the spice. 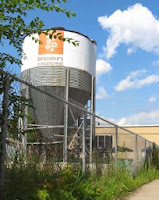 This is  very flavorful stout.On first sip, there is a strong bitter chocolate taste which comes through. As that fades in comes some subtle spicing, no licorice taste which I was expecting, but something else. Perhaps absinthe has a different taste than it's aroma suggests!

It is a very nice, different stout. I would love to try it on tap at their restaurant, but don't think I would by it for my fridge here at home.