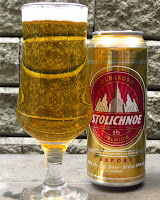 This week I found a Russian lager of the shelf of my local LCBO, Stolichnoe Premium Beer from Ochakovo Brewery. Now I knew that I had done a Russian beer before and thought it was great to try a second. After all a country as big as Russia would have many breweries right?

The beer I featured from Russia was Ochakovo Lager obviously from the same brewery.

As I mentioned in the first article the brewery was created in 1978 to provide beer for the tourists who came to Moscow for the 1980 Olympics. What I didn't know then was that Ochakovo beers are available in 60 regions of Russia and exported to more than 30 foreign countries such as the USA, Canada, Japan, Germany, Greece, Israel, CIS countries and others. 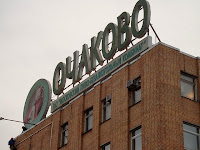 This 4.6 APV beer pours golden in colour with a white head that dissipates quickly. There are some evidence of hop bitterness in the aroma. Very little lacings are left behind on the glass.

It starts with a little hop bitterness, which stays throughout and disappears quickly in the finish. It's a decent beer.

Note to self. Next time you find a beer from Russia, make sure it's from a different brewery! I checked and there are more!