Beer of the Week - Karlovack Lager 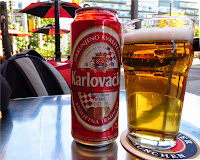 It was a beautiful day as I headed home from work, so I stopped off and grabbed a seat on the Bier Markt patio. The King Street location has one of my favorite patios in the city, plus they have a great variety of beer.

I flipped through their beer menu book, yes it's a book and found that they carried Karlovack Lager, which is a Croatian beer. I have never had a beer from Croatia, so ordered one up from Jackie, my server who always looks after me very well.

Karlovack Lager is brewed by Karlovack Pivovara, (Pivovara translated naturally means brewery). The brewery has been around since 1854 and according to The Beer Book,  is the second largest brewery in Croatia. I could find very little else about this brewery except that it was bought out by Heineken in 2003 and that every year in August, the brewery puts on a beer festival in the Karlovak's city square.

It pours a golden colour with a white head and yes, lacings are left behind as I sip. I can sense some hop bitterness in the aroma. The beer starts of with a very light taste, with a mild, but very nice bitterness coming through in the finish. I find this a very enjoyable European style lager.

Enjoyable enough that I enjoyed the sunshine with another!

Labels: Beer of the week, Croatia