Many people criticize the LCBO, but I love how they are able to bring in beers from all over the world. For instance, this week I came home from the LCBO with a couple of beers from Renaissance Brewing of New Zealand. It’s the second New Zealand beer I have had this year.

Renaissance Brewing started in 2005 when two Californian brewers took out a lease on a building known as Grove Mill which is the oldest commercial building in Blenheim, a town located on the top of New Zealand's south island. The town is in the middle of wine country and the Old Mill has been an ice cream factory, a malt house, and twice been home to Marlborough wineries (Grove Mill and Whitehaven). Now it is a craft brewery.

But the company couldn’t start producing beer until 2006 as there was a delay in getting the bottling machine they ordered from Italy. The reason? The suppliers took six weeks off due to celebrations of Italy’s soccer team winning the World Cup. In 2009, they started exporting their beer to their very close neighbor, Australia. Today though, Canada is the largest exporter of Renaissance beer, with Australia being second. Next year the company is looking to start shipping it’s beers to Europe and the US. And the beer? 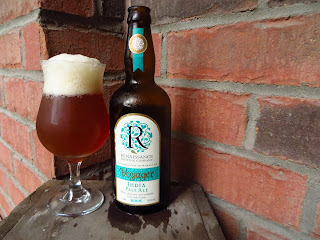 It pours very lively with a deep amber colour with a large but a porous off white head. When the head settles I add some more beer and again lot's of head springs up. There is lots of aroma here with some noticeable pine notes.

The beer seems over carbonated. It has the consistency of a sparkling wine, but without the bubbles leaping from the glass. There is a sweetness to the start and again it seems like bubbles in the mouthfeel, and finishes with a long, slightly piney finish.

I am quite disappointed in this beer. It's like drinking air and a waste of the $5.65 I spent one bottle. Hopefully the American Pale Ale will be much better. 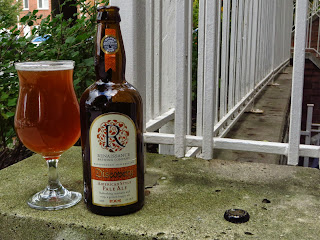 This is a completely different pour as I had a very hard time getting a head on this. It is perhaps a shade lighter than the Indian Pale Ale, but lot's of lacings are left behind as I sip. There is a slight hint of citrus in the aroma.

I was expecting something bolder, hoppier and more in you face, but instead found this to be a pleasant, lighter tasting ale. It starts a little watery in mouthfeel, with very little flavour and then the citrusy bitterness comes crashing in nicely in the lingering finish.