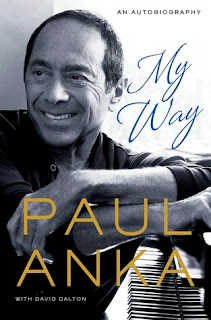 Although I have never been a big fan of Paul Anka's, except for his song "Diana", I looked forward to reading his autobiography My Way as I thought it would be a great look into the early days of Rock and Roll.

The smooth, charismatic singer and songwriter in his own words-the long-awaited autobiography that reveals a life that has been much more dramatic than his crooning reveals.

A teen idol of the 1950s who virtually invented the idea of singer-songwriter-heartthrob that still fuels the industry today, Paul Anka's slew of hits-from "Diana" to "Put Your Head on my Shoulder"-earned him a place touring with the major stars of his era, including Chuck Berry, Jerry Lee Lewis, and Buddy Holly.

When the British invasion wiped out the style of music that had made him famous, Anka made sure his "wipeout" wasn't the end of his story. An astute businessman and image-builder who didn't let anyone else run his career, he toured the world until returning home for his "comeback", becoming a charter member of the Rat Pack, writing the theme music for The Tonight Show as well as his friend Frank Sinatra's anthem "My Way"...The Times of My Life is bursting with rich, rollicking stories of the people who have been part of Anka''s life.

I really enjoyed  the first half of the book. He doesn't spend too much time recounting memories of being a small child, which I find some autobiographies tend to do, but jumps quickly into Anka trying to make a name for himself as a young teen in Ottawa. I loved the stories about all the stars and  personalities of the 50's and early 60's.

The book starts to bog done when he talks about changing the direction of his career and going to Vegas. I realize that Vegas and touring took up the majority of his life and the story of the start of his life there is interesting, but I feel it is his stories of Sinatra and the Rat Pack really bogged it down. For large parts of the book I felt I was reading a Sinatra biography and not an Anka autobiography.

I found it annoying how the writing would go from past to present tense and back again. This is not Anka's fault but whoever did the proofing and editing of the book.

Anka wrote the song "My Way" for Sinatra, which resurrected  Sinatra's career. He spends a little time about how he came to write the song, give it to Sinatra and his thoughts on singing it himself and others that sang it. I liked his thoughts on Sid Vicious's take on the song:

Although I do like the way Sid Vicious did it. At first I thought he was just goofing on the song. He starts out making fun of it, but then he gets into it, gets swept up in it.. It's as if the song midway reaches out and grabs him by the foot.

Sid Vicious version isn't my favourite, and I can't say honestly that I would listen to it every week but what he did worked as both a goof and a sincere take on it, which is a pretty amazing accomplishment in and of itself. Sid put himself into the song and he really did do it his way.

So when Vicious did it, I was pleased to hear that it touched him in some way, that he wanted to make that statement and at the same time I was amused by it. I was flattered that a punk like Sid, wanted to do "My Way," someone who was into music totally different from mine.

"My Way" is not a bad read, but I found myself quite bored with it by the end.