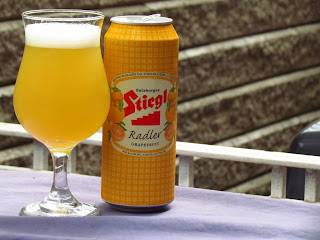 After a summer off, the Beer of the Week is back!

I see that there is a frenzy going on about a Grapefruit Radler from Stiegl Brewery.  It has been extremely popular on draft at Toronto bars and this week made its appearance on LCBO shelves in cans.

So how popular is this?

My local LCBO received 1300 cans and I was in the store two days later and less than a 100 were left. The manager had to go get another case from the back as they could not keep this on the shelf.

I have never had a Steigl product before and see that it is a privately owned Austrian brewery that has been in operation since 1998.

So what is a radler?

The Radler is a German creation originally made for cyclists, as cycling is a very popular German activity. It is a mixture of a blonde beer and a fruit juice. The original radler was made with blonde beer and lemonade, so really this is a version on a shandy. The radler is meant to be a light, refreshing, low alcohol beer to quench a riders thirst on the road without impairing them. 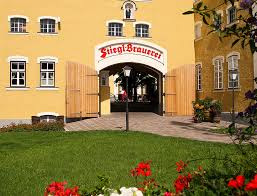 The Stiegl Radler is made with grapefruit juice instead and weighs in at just 2.5% APV. I am going in open minded about this due to some people at work giving it praise and its popularity. I remember back to how I thought pineapple would not work with a beer when I first heard about it but found myself loving the Spearhead Hawaiian Pale Ale.

The beer pours an off white colour, a little darker in shade than the colour of a white grapefruit juice. Grapefruit and citrus are very prominent in the aroma. There was a head which disappeared very very quickly and no lacings are left behind on the glass as it empties.

This radler tastes like a weak grapefruit juice. Grapefruit juice has a good bite to it but this has only a little bite. I was hoping that there would be a hop presence to add to the grapefruit in the finish but there was none.

I looked at the ingredients on the can and found that it was 60% juice, (lemon, grapefruit and orange) and only 40% beer which is the Stiegl Goldbrau. No wonder there was no beer presence in this!

Granted this would be a refreshing, nonbloating beverage to have after exercise or for a break while riding on a long trip, but I would rather have an energy drink and have a real beer later. I am disappointed. There really is nothing to this.