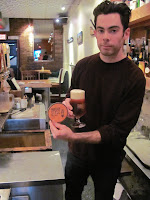 This week, the Beer of the Week is being done a little different.

I like to research a brewery before trying the beer, hoping the beer will meet or exceed my expectations. Sometimes it does and sometimes it doesn't. I just don’t want my writing of the brewery influenced by what I think of the beer.

That’s what is different this week. I am writing about a beer which I have already tasted.

I first tried Spearhead Hawaiian Style Pale Ale at Session 99 Craft Beer festival. Knowing there is pineapple in it I was quite leery. I like to think of myself open to anything but pineapple in beer?

Spearhead Brewing Company is the brainchild of Dimitri van Kampen who back in 2008 was a financial lawyer working over in London, England. That was until the crash of 2008. Ac 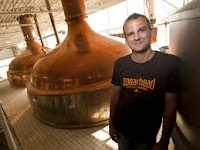 cording to Globe and Mail Jun. 30, 2011 article, van Kampen explained "I had lost all of my clients overnight. Lehman Brothers, Merrill Lynch all went away and I’m sitting there, with not much to do, and I started thinking what I might’ve done with my life if I had’t gotten into law," he says.

His father also passed away that year but before he did told Dimitri that he had no regrets. He had done everything in life he wanted to do.

So Dimitri thought about what it was that he really wanted to do. In England, he had discovered great ales and decided that’s what he wanted to do. Brew beer.

He did not want his first beer to hit the market place to be an every day beer. He found the Ontario beer marketplace to be crowded and wanted to do something different. He experimented on his stove at home with different recipes and came up with the recipe for a pale ale with pinea 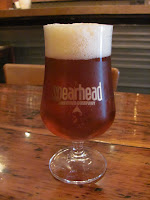 pple in it. He hired on Tom Schmidt, a brewmaster with 20 years experience, and Spearhead Brewing Company opened with their first beer in June of this year with their Hawaiian Style Pale Ale.

His company of 9 employees works out of Cool Brewery. They do not sell their beer anywhere but in Southern Ontario bars and pubs. It is much cheaper than opening their own brewery although van Kampen admits there are challenges to working out of someone else's kitchen.

So what about the beer?

I enjoy this pale ale and have had a few of them since that first tasting. When I remember back to when I first heard about this beer, I had expected that with pineapple being in it , that it would be a sweet beer. I was wrong!

Instead on using old tasting notes, I am sitting in Tequila Bookworm having fresh one. I like Tequila Bookworm. Their clientele are friendly and Matt, who is always behind the bar when I am there, looks after me well.

As the beer is 6.5% APV, it comes in a 16oz Spearhead stemmed tulip glass instead of a regular 20 oz ale glass. It pours a light coppery colour with a nice white head. The h 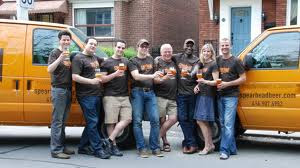 ead remains for some time. There are lots of nice lacings that remain behind as the beer is sipped.

I can smell the hops in this and maybe a hint of pineapple, although that could be my imagination knowing it is in there. According to their website, this beer uses Cascade, Centennial, Northern Brewer hops, all which are quite aromatic hops (yes, I am starting to learn about hop style now).

It starts with a nice slight bitterness when sipped but that bitterness increases in the mouth. I can sense the pineapple in it, yet it is a bitter pineapple taste. Pineapple is one of the few fruits I enjoy, which we buy peeled and cored weekly. I enjoy its sweetness but find the bitter pineapple influence in this confusing but quite enjoyable. There is a great long bitter finish to this which I love

Tequila Bookworm has an excellent variety of 10 Ontario craft brews on tap. Tonight, though, I am opting for another Hawaiian Pale Ale as it has become one of my favorite draughts.

Can't wait to see what this brewery comes out with next!