Beer of the Week - A. Le Coq Premium Lager from Estonia 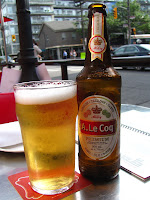 I love stopping in at the patio of the Bier Markton a Friday night on the way home from work. It's exactly half way on my walk home. This night when I was looking through their extensive beer menu, I saw that they had a beer from Estonia.

I'm sorry but I had no idea where Estonia was until I got home and Googled it. Turns out that it sits on the Eastern shore of the Baltic Sea, has a population of almost 1.3 million and their main language is...Estonian.

A. Le Coq Premium Lager comes from the countries number two brewer A. Le Coq Brewery. I have to say that researching the companies history was quite confusing, likely due to the translation from Estonian to English, so here is a short, hopefully close version of it's history. 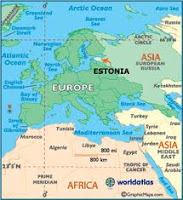 The company was originally founded in London in 1807 by Albert le Coq, a Belgium businessman as a beverage trading company which started brewing his own beer there in 1808.

Meanwhile over in Tartu Estonia, BJ Hesse had started a brewery around 1800 and Justus Reinhold Schramm opened his own brewery in in 1826. In 1885 Schramm's heirs renamed the company Tivoli Ltd and in 1900 merged with Tartu Brewing company the same company opened by Hesse in 1800.

In 1913 Tivoli was bought out by A le Coq and the company moved to Tartu. For the next 84 the company had to survive total destruction of it's brewery and building during both world wars, plus renaming and nationalization by the Soviet Union when Estonia was annexed Russia. Finally in 1997 the brewery was bought out and privatized by a Finnish brewing company Olvi which gave it back it's original name A. Le Coq.

It pours a light straw colour,  with a nice white head that leaves lacings along the inside of the glass as I sip away. I was unable to sense any aroma, but I am streetside and there is a breeze.

There is a subtle bitterness when I first sip but then the flavours fall right away. At 4.7 % APV, I expected more flavour but there is not too much to this beer. It's very much like a big brewery light beer. It was cold and unoffensive so I had no trouble finishing it.

I didn't order a second though.

Labels: Beer of the week, Estonia