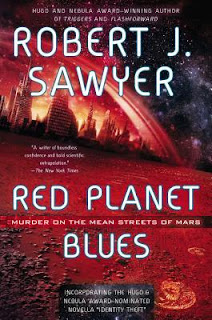 Alex Lomax is the one and only private eye working the mean streets of New Klondike, the Martian frontier town that sprang up forty years ago after Simon Weingarten and Denny O'Reilly discovered fossils on the Red Planet. Back on Earth, where anything can be synthesized, the remains of alien life are the most valuable of all collectibles, so shiploads of desperate treasure hunters stampeded to Mars in the Great Martian Fossil Rush.

Trying to make an honest buck in a dishonest world, Lomax tracks down killers and kidnappers among the failed prospectors, corrupt cops, and a growing population of transfers-lucky stiffs who, after striking paleontological gold, upload their minds into immortal android bodies. But when he uncovers clues to solving the decades-old murders of Weingarten and O'Reilly, along with a journal that may lead to their legendary mother lode of Martian fossils, God only knows what he'll dig up...

Although I really enjoy science fiction, I am not a fan of private detective novels, so going in, I did not know what to expect. The story is interesting enough and with a good ending. If I had any complaints, I found it just a touch long and a little confusing in places but for the most part was an easy enjoyable read. It is not a great book, but a good one.

For a person who likes sci-fi and detective novels, this book would be a home run for sure!
Posted by Swordsman at 17:21