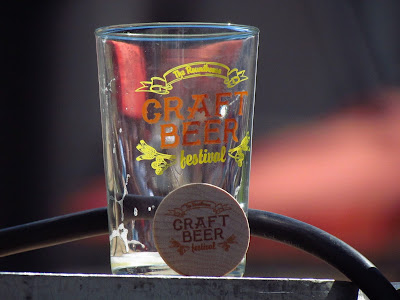 This has been a summer of beer festivals and today Teena and I were at the Roundhouse Craft Beer Festival.

This is just the second year for the festival and the first for us. Not only is the festival a chance to taste some great beers from Ontario craft brewers but according to Blog TO, proceeds from the festival go to the Toronto Railway Heritage Museum. In fact, there is a small gauge steam train that takes the kids for a ride around the museum grounds and around the festival.

Look both ways before entering the festival to be sure a train is not coming! 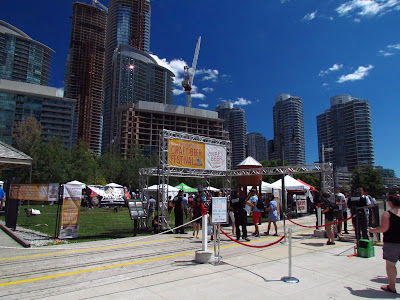 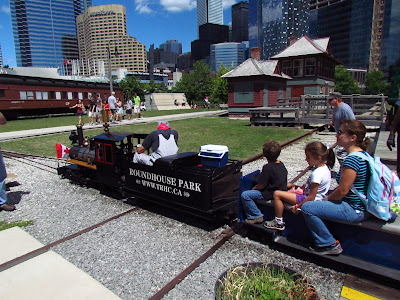 We arrived just after 1pm before the crowds got there. It was great with no lineups for beer! 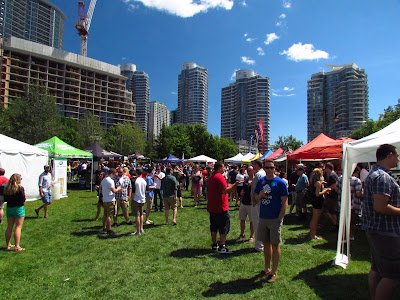 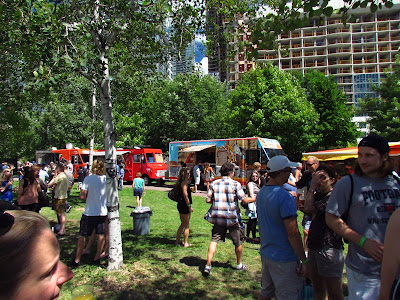 Here we are ... Christine, me, Teena and Darlene enjoying a beer in the shade. 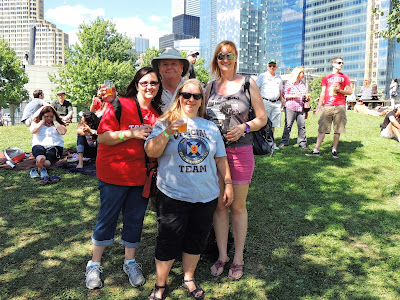 There were some great beers on tap. I love 10 Bitter years from Black Oak Brewery. It was the first time that Darlene had it and she loved it too! 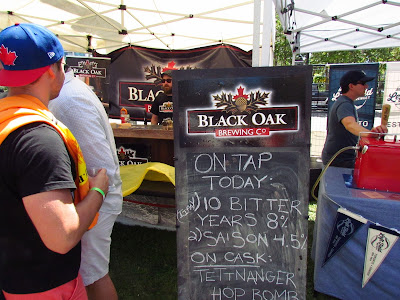 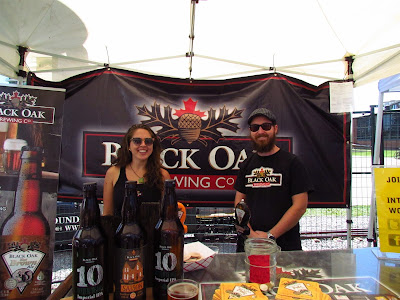 Hogsback Brewing had a very weird beer called Alohog Coconut Pale Ale. On first sip, I did not like it but halfway through I was enjoying the mild bitterness of the brew finishing with a bitter coconut flavour. Not a beer I could have too much of but one I would try again. 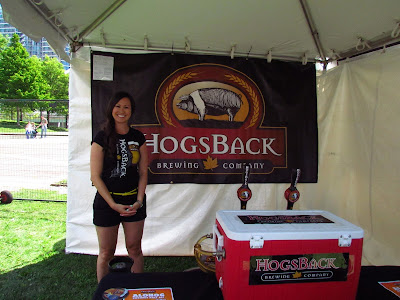 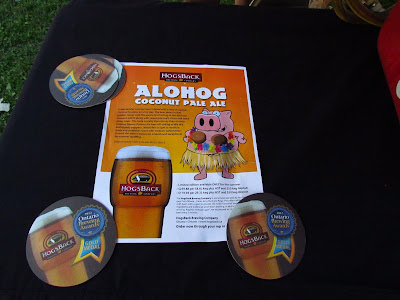 Amsterdam Brewery had a constant lineup so I never got there but everything they had on tap I have tried before and some of them I have in my fridge. 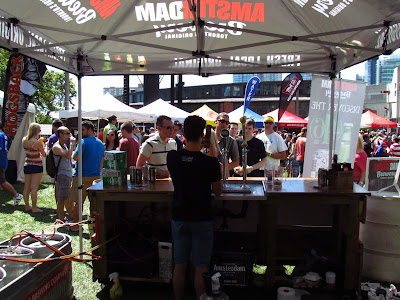 Grand River Brewing was there. Their tent didn't have great signage but they had a great beer, Tabbey Abbey Ale. I asked about the name. Even though it is spelled incorrectly, the owner has a cat. A tabby named Abbey. That's who the beer is named after. I had a few of these! 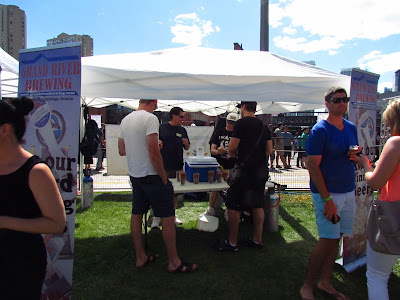 Steam Whistle Brewing had the shortest trip of all the breweries as they are located right in the Roundhouse. They usually only brew one beer, Steam Whistle Pilsner, a beer I really enjoy and wrote about way back in 2008. Today they had a Rye Lager that I really enjoyed. So did everyone else as when when I went back for another, they were sold out. 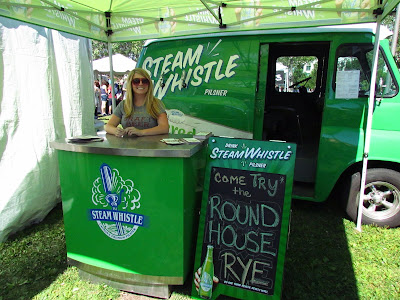 The festival is held in a nice downtown park by the Roundhouse. The shade was appreciated. 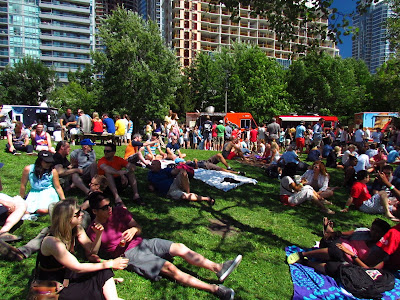 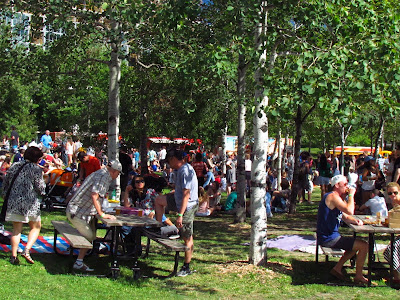 Now here was a strange site. This picture was taken about two and a half hours after the festival started and look at this. Not only was there no line-ups but more than half of them were empty! Blue is beautiful! 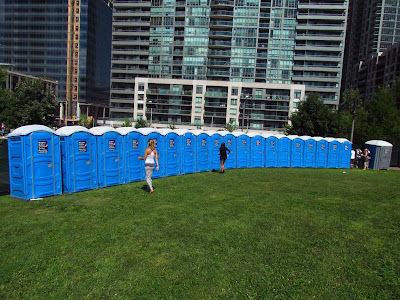 There was music too, and maybe it's just my age now, I found a little loud. 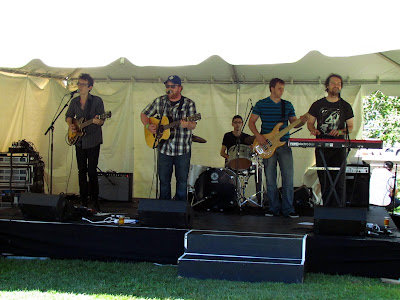 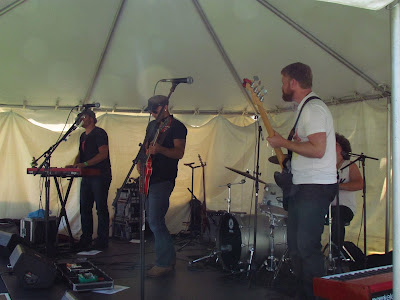 After the Blue Jays game was over (I was glad to hear they won 5-4), the crowd from the game came over and the place became quickly crowded, even with a line-up outside to get in! People were getting a beer and heading over to another beer line right to drink their beer while they lined up for the next one! It was time for us to go! 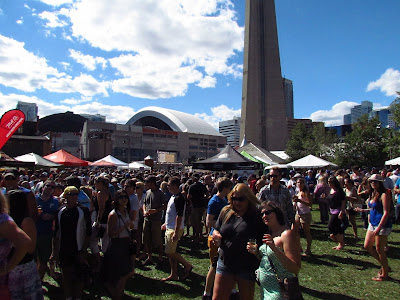 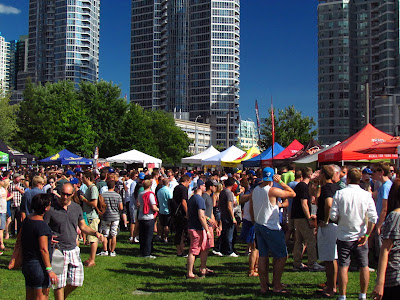 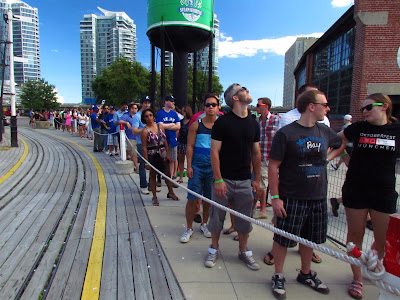 I found it strange that some people thought it OK to bring their children to an event like this. There were some toddlers, some babies in strollers, some kids five to six years old and I just don't believe they belong at an age 19 and over drinking event. If something happened to the kid, if they were stepped on or fallen on, the parents would be the first to try to sue the organizers. Parents should know better. Get a babysitter!

In the end, it was a terrific afternoon. If they have this next year, I would want to be there earlier to enjoy the afternoon a little more before the big crowds come in.

Nice to know that lots of money likely was made for the Toronto Heritage Railway Museum! 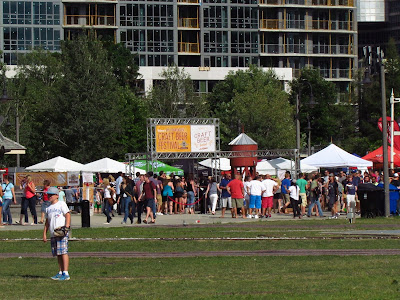