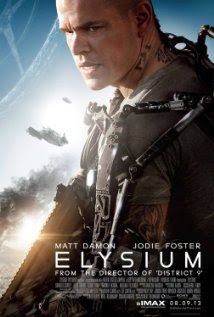 Tonight I went to see Elysium. According to the Oxford Dictionary, Elysium is "a place or state of perfect happiness".

In the year 2159 two classes of people exist: the very wealthy who live on a pristine man-made space station called Elysium, and the rest, who live on an overpopulated, ruined Earth. Secretary Rhodes (Jodie Foster), a hard the government official, will stop at nothing to enforce anti-immigration laws and preserve the luxurious lifestyle of the citizens of Elysium. That doesn't stop the people of Earth from trying to get in, by any means they can.

When unlucky Max (Matt Damon) is backed into a corner, he agrees to take on a daunting mission that if successful will not only save his life, but could bring equality to these polarized worlds.

I enjoy apocalyptic movies and this one is set up very well. On earth everything is a shambles, one big polluted slum, while the giant space ring Elysium, floats in space and is so huge it can be seen from earth even during the day, taunting its citizens. Elysium has perfection for the rich, immaculate homes, pools, greenery and most importantly, medical machines that can mend or cure any ailment almost instantly, guaranteeing immortality.

Although the special effects show a wonderful Elysium, it is the gritty way that earth is portrayed that I really enjoyed. This was written and directed by Neill Blomkamp, who also did District 9, so think District 9 only more run down and helpless.

The acting was terrific but it is the story here that is great. It starts with two separate stories, Max's life on earth in Los Angeles, and Secretary Rhodes story on Elysium. Of course, they come together and it is well done.

Elysium has great action scenes, special effects, interesting settings, great acting and a great plot. It's a film worth seeing at the theater on the big screen. I give it an 8/10!
Posted by Swordsman at 20:00

After all of the insanely epic trailers and previews we were getting, it is a bit disappointing to say that this didn’t fully deliver as expected. Nice review.