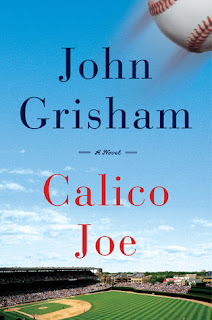 Usually when I read books about baseball, they are non-fiction. There are so many great stories about players who have played in the major leagues or spent most of their careers tolling in the minors that it never occurred to me to read a fiction.

Calico Joe has been on my list to read for a few months and just recently I got around to actually cracking the cover (can you still call it that with a Kobo?)

Whatever happened to Calico Joe?

In the summer of 1973 Joe Castle was the boy wonder of baseball, the greatest rookie anyone had ever seen. The kid from Calico Rock, Arkansas dazzled Cub fans as he hit home run after home run, politely tipping his hat to the crowd as he shattered all rookie records.

Calico Joe quickly became the idol of every baseball fan in America, including Paul Tracey, the young son of a hard-partying and hard-throwing Mets pitcher.

On the day that Warren Tracey finally faced Calico Joe, Paul was in the stands, rooting for his idol but also for his Dad. Then Warren threw a fastball that would change their lives forever...

In John Grisham's new novel the baseball is thrilling, but it's what happens off the field that makes CALICO JOE a classic.

And it's a John Grisham book without lawyers!

I really enjoyed this book and was fully engaged in the story. The story is told in flashbacks about Paul Tracy's life, and Joe Castle's first games with the Cubs and then comes to the present, 30 years later, and written in present tense about Paul's life.


Calico Joe is a well written, engrossing story. In fact if there was a sports novel that I wish I had written, this would be it. This is a great read whether a person follows baseball or not.
Posted by Swordsman at 10:05