Book Review - "Bitter Brew: The Rise And Fall Of Anheuser-busch And America's Kings Of Beer" 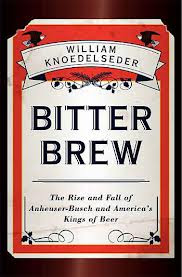 The engrossing, often scandalous saga of one of the wealthiest, longest-lasting, and most colorful family dynasties in the history of American commerce-a cautionary tale about prosperity, profligacy, hubris, and the blessings and dark consequences of success. From countless bar signs, stadium scoreboards, magazine ads, TV commercials, and roadside billboards, the name Budweiser has been burned into the American consciousness as the "King of Beers."

Over a span of more than a century, the company behind it, Anheuser-Busch, has attained legendary status. A jewel of the American Industrial Revolution, in the hands of its founders-the sometimes reckless and always boisterous Busch family of St. Louis, Missouri-it grew into one of the most fearsome marketing machines in modern times. In Bitter Brew, critically acclaimed journalist Knoedelseder paints a fascinating portrait of immense wealth and power accompanied by a barrelful of scandal, heartbreak, tragedy, and untimely death. This engrossing, vivid narrative captures the Busch saga through five generations. At the same time, it weaves a broader story of American progress and decline over the past 150 years.

Big businesses have a life all their own and many of them are quite interesting and worth reading about. Anheuser-Busch is no different. Bitter Brew is not so much of the story of a business but more about the family that owned, ran and prospered greatly.  The family history is full of scandals, cover-ups and a coldness between fathers and sons. Yes that is plural.

My favorite family member was Gussie Busch who ran the brewery from 1946 to 1971 and was greatly loved throughout St Louis for all he did for the city, including saving their baseball team, the St Louis Cardinals, from moving to another city.

I loved the nicknames that people used to distinguish the different "Augusts" which ran the company. The first was August, August the Second was "Gussie", August III was "Three Sticks" and August IV was known as the "Fourth".

August started it, Gussie grew it to the number one brewery in the US. Three Sticks grew it further and The Fourth lost it.


Again this is the story of the people who owned and ran the brewery, not the ins and outs of the business, their elaborate wealth and the trappings that come with it.