My Birthday Beer of the Week - Samuel Adams Utopias 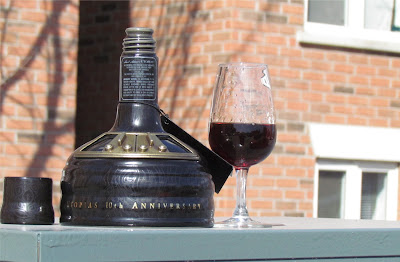 Utopia definition: An imagined place or state of things in which everything is perfect.

For the past nine years, Jim Koch, owner and head brewmaster of Samuel Adams, has made a very special limited edition beer, Utopias! This year is the 10th anniversary of the brew and only 15,000 bottles were produced, with just 300 of them being sent to Ontario for sale at the LCBO. On March 1, they were sold by phone order only, on a first come, first served basis. I managed to snag bottle #7056.

Sunday is my birthday so the timing was great that it was delivered this week!

Utopias also comes with its own glass but to prevent damage, it is shipped separately.  I ordered mine today. 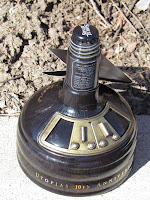 Every year Samuel Adams goes out and sources the best ingredients for the brew and every year the beer is different. This year the beer was brewed with pale malt, smoked malt, Munich and Caramel 60 malt plus four different hops. Maple syrup was added this year and along with the Samuel Adams yeast, a champagne yeast was added during fermentation.

This beer also has a blend of aged beers, including their original Triple Bock which was brewed and has been aging since 1994! The aging was done in single use bourbon casks, plus spent time rotating between finishing casks of Tawney Port, Vintage Ruby Port and rum barrels from Nicaragua.

Looks like a lot of work went into this!

The bottle or decanter is shaped like a brew kettle like previous years but this year it is black with a off white lines representing roots running around the bottle. The doors on the front of the kettle open but instead of revealing a picture of Samuel Adams hoisting a beer, instead it says "Cheers to 10 years" and is signed by Jim Koch. 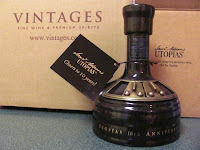 When I unscrew the lid, I find underneath it that it is capped with a regular beer cap. The lid screws back on to preserve the beer, which I have heard will keep for years.

And what about the beer itself?

Despite using champagne yeast in the process, there is no head or carbonation in this at all. Although made using the regular brewing process, this beer comes out with over 27% APV and looks more like a dark mahogany liqueur or cordial.

The aroma is quite strong and complex. I am unsure as to what I can identity. My first thought was toffee but that can’t be right. After sipping is when I found there is caramel 60 malt in this so perhaps I am not off.

There are layers to this, maybe some brandy or bourbon? Do I also sense some maple syrup or just believe I do because I know it is in there? I only know that the aroma is complicated and fun.

When sip it, I see there is a clear film left along the inside of the glass. If the aroma is complex, the taste is even more so. 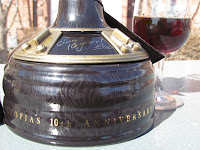 It comes at you in layers, first some sweetness, followed by a bourbon, maybe a slight maple syrup flavour and finishes with a pronounced sweetness and a tang that stays on the inside of my cheeks for a very long while. As I write this, there might be a long while between sips but the finish keeps lingering.

Some people think that I am crazy for paying $115 for a 24 oz (700 ml) bottle. Those people have not tasted how wonderful this is. Yes, this beer is Utopias and will be sipped only on special occasions.

Next year will find me trying for some more but for this year, Happy Birthday to me!!