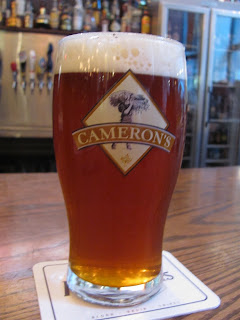 Tonight I went to the Beer Bistro, one of my most favorite places int Toronto, after work to have a couple of beers and read.

I was not going to "research" a Beer of the Week but one came along. Usually I like to go in blind, buy the beer beforehand or know what I am going to order, research the brewery, then try the beer and write about it.On the extensive beer menu, I saw that they had a Rye Pale from Cameron's Brewery and I knew I had to give it a try.

I do admit I was a little apprehensive with there being rye in this beer so the bartender gave me a couple ounces to sample first ... and I liked it so much I ordered a half a litre glass (17 ounces).

Cameron's Brewing Company was opened in 1997 by Cameron Howe. During those years they produced just four regular beers and the odd beer for cask competitions. In 2010, Bill Coleman took over as president and co-owner (I have been unable to find out if Cameron Howe is the other co-owner or if it's someone else). The beer profile of the company has change since with seasonal beers now being offered. The Rye Pale Ale was originally made for the 2011 Bar Vola IPA Challenge and earned a second place finish.

It was because of this success that they brewed it again in April 2012 as a seasonal and sold it in bottles and on tap at different beer places in the GTA. In November they started brewing it again where it gained some notoriety.

“Not only have our beer fans’ discerning taste buds recognized this brew as a winner, but also judges from Canadian and Ontarian beer competitions have awarded Cameron’s for its unique and outstanding product with a gold and silver medal as well as a People’s Choice Award,” Bill Coleman said in an article. 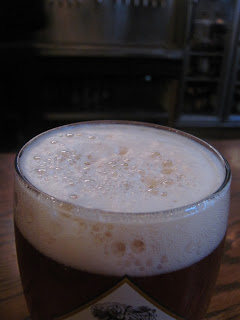 So, you already know that I like this beer but how can I describe it?

It pours with a orange hue and a off-white head. The head lasts a long time, which was good as I needed a cooperative beer so I could dig out my camera and take a couple of shots. When the head finally began to slowly dissipate, there was a huge amount of lacings left on the inside of the glass. This beer is dry hopped and I could certainly tell with the wonderful aroma it gave off.

To me, the beer started with a quick bitterness, a very citrusy one, then some malt seems to come in as a buffer between the start and finish as the finishing bitterness is one more of pine. Coming along with the finish is a different very nice taste. This is likely the rye and I like it! If you haven't already guessed, I think this is one fabulous beer.

It is not yet available in the LCBO. I wish it were.