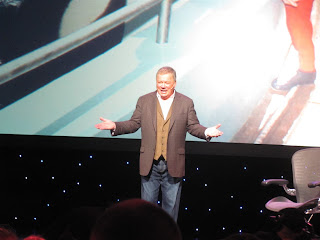 Last week Teena mentioned that William Shatner was coming to Hamilton to do a couple of shows. Tickets were a hundred bucks and it was an hour's drive away.

So we decided no.

Then I received an email on Thursday from Ticketmaster saying that tickets for the show now were half price, so off we went this afternoon to see Shatner's World: we just live in it at Hamilton Place Theater.

Movie legend William Shatner will bring his one man show SHATNER’S WORLD: WE JUST LIVE IN IT to Hamilton. The 90-minute show will take audiences on a voyage through Shatner’s life and career, from Shakespearean stage actor to internationally known icon and raconteur, known as much for his unique persona as for his expansive body of work on television and film.

It is also good to note that a portion of the proceeds from today and tonight's show are going to the United Way of Hamilton Burlington. Both shows too are being filmed for a television special.

At 81 years old, Shatner is funny, thoughtful and still full of energy. After his first minute on stage, an office chair was sent rolling across the room to him. I thought he might spend most of his 90 minutes on stage seated. 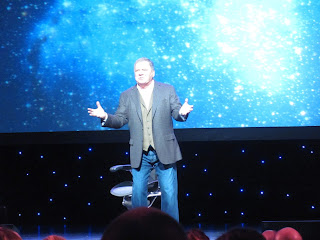 Occasionally he sat, but mostly the chair was used as a prop. On each side of the stage was a seat and a quaint raised table. Once in awhile he would show a clip from something in his past on the screen behind him and I noticed he took the moment to head to the table, take a quick sip, wipe his brow and take a momentary seat. Then off he went again full of energy.

Shatner's career is so unique and eclectic and long, he is one of the few stars that could pull off a one man show like this.

It was a fun and enjoyable show and I like how he finished with a song. Well, knowing his voice is not great it was lyrics spoken to music, but still a great finish to a show!
Posted by Swordsman at 20:04