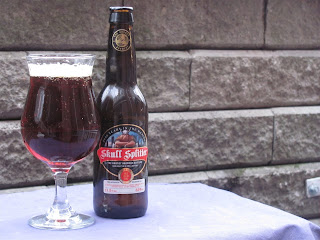 The brewery is located in a beautiful old schoolhouse in Quoyloo. Pictures of it and the Orkney Islands make me want to head over for a vacation!

The brewery was founded in 1988 by Roger White in the same old school house it still occupies. In 2004 when White retired, he sold the brewery to Atlas Breweries.

Norman Sinclair was a very enterprising gentleman. He graduated from business school in 1981, specializing in hotel management and took over his families hotel business and ended up one year winning the AA Inspector Hotel of The Year. He went on to by a country pub outside of Inverness and subsequently won 2 awards for catering. In 2006, it was time for Sinclair to try something else so he created Sinclair Breweries and bought Orkney Brewery from Atlas Breweries.

This beer, the brewery's strongest ale weighing in at 8.5%, is named after Thorfinn Einarsson who was the 7th Viking Earl of Orkney, and for some reason known as Skull Splitter. There were many wars in those days so I can imagine where the name came from. 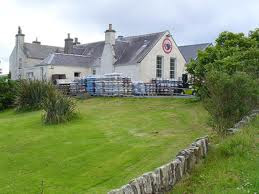 The beer pours dark brown with a reddish tinge. The head is off white and does leave nice lacings on the glass. There is a strong malt forward aroma with something else in it, maybe caramel? The picture I took of this beer, which is at the top of this article, I shot outside with no gloves and a cold wind blowing. I am grateful that this is a very warming beer. The beer starts a malty taste, which seems to quickly fall off. despite being a high alcohol beer, there thankfully is no alcohol taste to it, which I  detest.

This is a pretty good beer, but not one really to my taste.

Now I have Orkney and it's brewery added to my long list of places I would like to visit. Someday...someday!