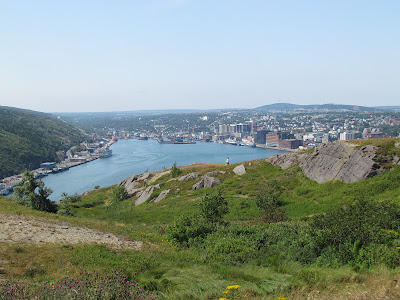 Teena and I had a great time in St John's Newfoundland!

It is a fabulous place full of fun, adventure and the friendliest people you could ever meet. People would just start talking to you at bars, restaurants, even street corners. If we went to cross any street when not at a corner, the cars always stopped and waved. What you thought of Newfoundlanders being friendly, take that and multiply by ten!

Being on an island known for fishing and the freshest cod in the world, I was determined to eat as locally as possible, and for the most part I achieved that goal.There was only one dish I hated during my stay, I'm saving that one for last, but many I loved. In fact, I had a dish that I would rate as one of my favorites ever!

Time to take a look.

The best side dish was served at the Ship Pub. It was something called Newfoundland Poutine, with fries covered in turkey dressing and gravy. I don't like poutine but this rocked. It was the side dish to the pan fried cod which was excellent! 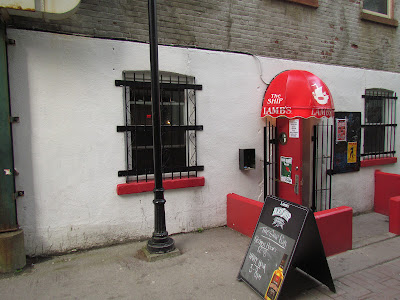 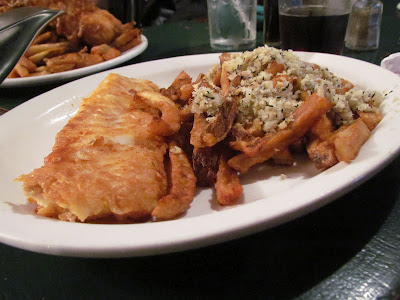 Up next is the place that served the best Fish Chowder and that was at Kelly's on George St. Hard to choose really as I had had a few and they all were good. This one had scallops, salmon, calamari, shrimp and cod in it, was very hearty and just so delicious. 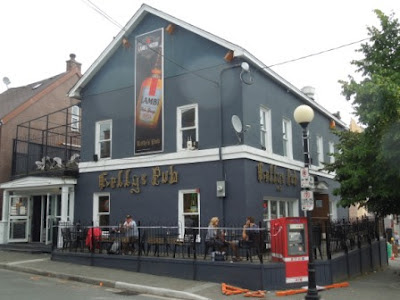 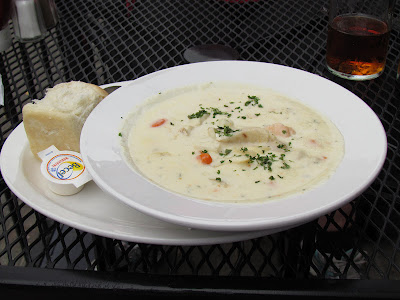 Breakfast is so important to me and found the best place the first day. We tried elsewhere but were drawn back to Talamh an Éisc each time. I had fried bolgna and eggs, fishcakes and eggs, and always with touton. What is touton? Well, I was told they used to take leftover bread dough and fry it in pork fat. Now they use fresh dough and it is so good. I want to treat myself the odd weekend to this. Their homefries were not very good, but the rest of the plate rocked! 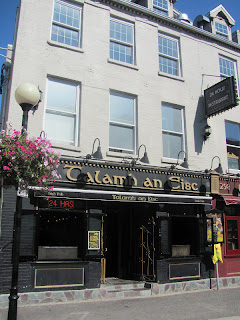 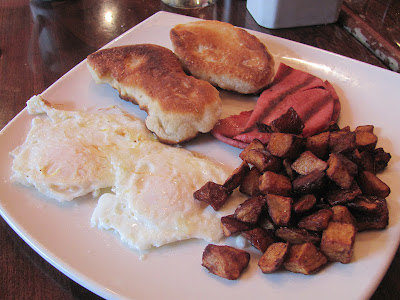 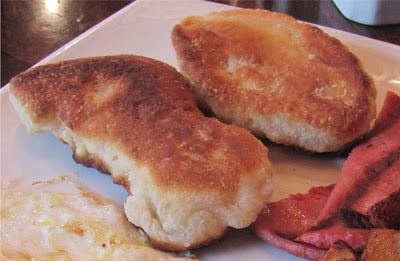 I had Fish and Brewis for the first time on the first day that I was there but enjoyed the Fish and Brewis served by Velma's on Water Street the best. It was drier and much tastier. I definitely not an expert but this fits more my idea of the traditional dish. 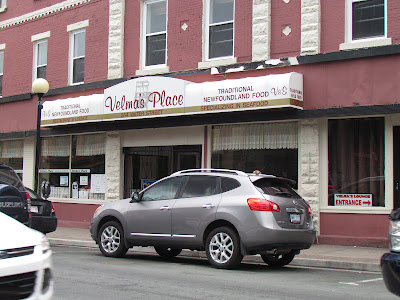 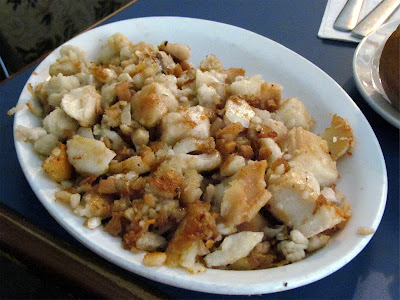 I would have to go back to Kelly's for the best pan fried cod. All the ones I tried were great but this one was a bigger portion and done to perfection! 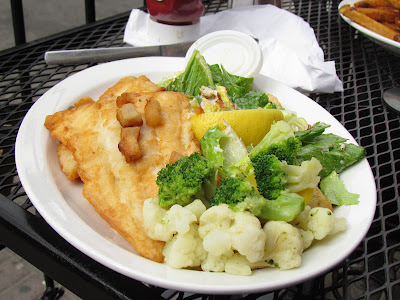 The dish that I fell in love with, I almost didn't try. Cod au Gratin. The first day I was told what it was cod, cream sauce with a chedder covering. For some reason, it didn't appeal to me. Finally I tried it at the Celtic Hearth, which is part of Talamh an Éisc, and I found it one of the tastiest, most delicious meals I have ever tried. Admittedly the crochette potatoes on the side were tasteless but as for the Cod au Gratin this is a dish I have to duplicate at home! 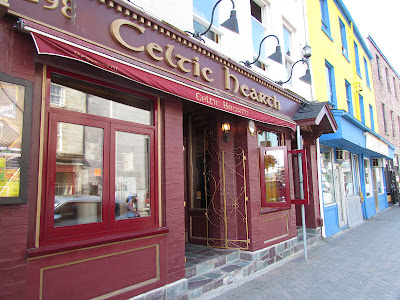 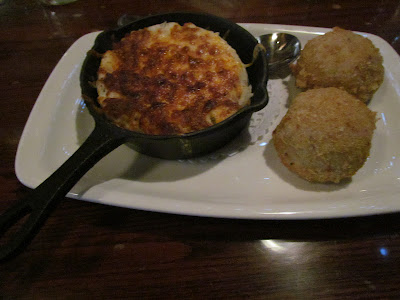 OK, now to the worst dish of the week.

Every menu had Fried Cod tongues on the menu. It is not a special slice of cod. Every cod has a tongue and that is what is cut out and fried. It is a little costly as where a fisherman might get many fillets from a cod, each cod has only one tongue. Here is what they look like freshly cut and raw. 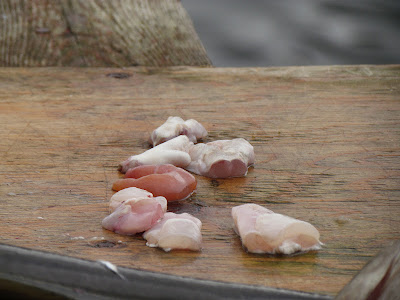 As I was debating about trying them, Teena was goading me on. "You can't go home from Newfoundland without trying these," she said. Funny but that rule didn't seem to apply to her.

Damyele, our server, said she would ensure they are fried a little crispier than usual as that is the way she likes to serve it to first timers. That really didn't make me feel any better. She did say it came with scunchions (deep fried pork bits) and mustard pickels. 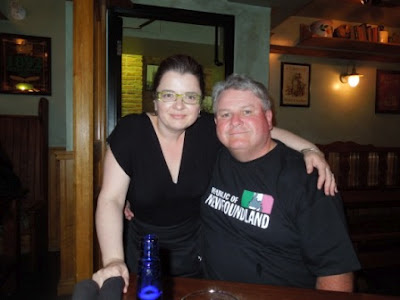 And here they are in all their glory! 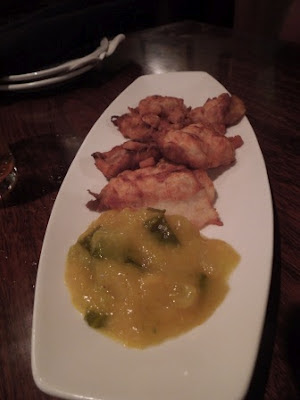 I bit in. They have a very nasty texture. The taste is not much better. No wonder Damyele said she would serve them crispy. Does Damyele like them ... hell no!

As it was eleven bucks, I was determined to do my own personal Fear Factor and finish them all. I found if I I cut them in half, added a scrunchion, and dipped them in the mustard pickle sauce it was somewhat palatable. 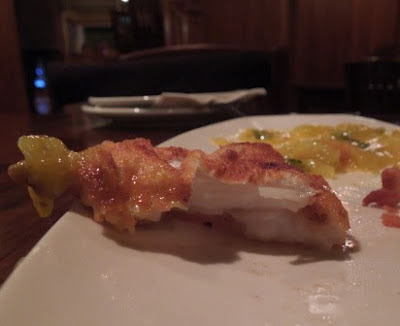 So that was my dining experience in St John's. Everyone knows that fresh is best and that certainly applies to cod. Will I have some now that I'm back in Toronto? Well, there's no way it can be as fresh but I bought some cod from the market today and plan to have it pan fried tomorrow.