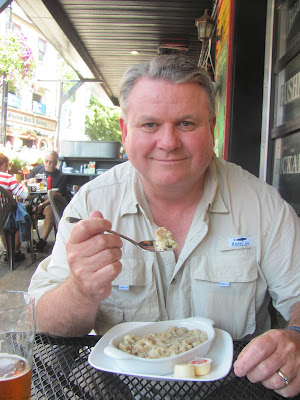 "Come home to Newfoundland, it's come home year,
All the Newfies will be gather here,
There's lots of Fish and Brews and treats like that,
So don't stay where your to, come where we're at!"
From a Stompin' Tom Connors song (written by Dick Nolan)

My grandmother was born and raised in Newfoundland but moved to Toronto. She knew a lot of traditional Newfie fish recipes, which she would cook for my dad whenever she received a package from down home. He loved it but I was too young to appreciate it and would pass.

One dish she told me about was Fish and Brewis, made with salt cod and Hard Tack. I've had Hard Tack. It is the consistency of a small rock but would last for long periods of time when the fishermen went to see or in the pantry. It needed to be soaked for a day in milk before it could be used.  I always wondered what it would be like.

Teena and I stopped at O'Reilly's Irish Newfoundland Pub for lunch and there it was ... Fish and Brewis! 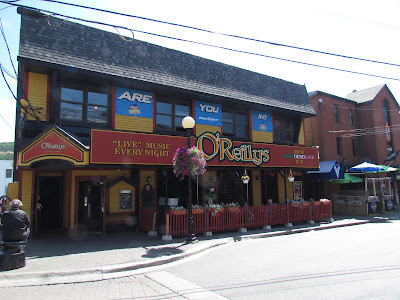 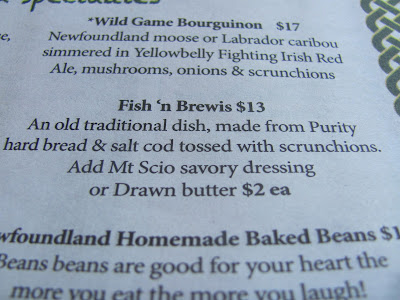 Going in I was wondering if I would like it, love it or hate it. Hopefully it wouldn't be the latter!

It was good. Although it's not a very colourful dish, how could it be when it's made of fish, hard bread and scrunchions which is fried pork fat, it is very tasty. Parts of the dish would be a little bland but when I got a piece of salt cod on my spoon, it would be delightfully salty, different in texture, very non-fishy,  and delicious.

All I can say is that when I return to St John's in a few days, I hope to try some again to compare. It's a dish I really enjoyed. It must be all the Newfie blood which runs through my veins! 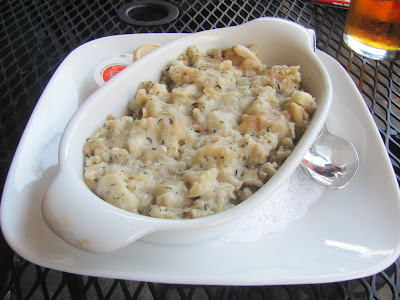