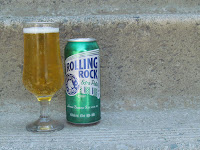 I have noticed lately that a lot of bars and pubs are now serving Rolling Rock Pale Ale from the U.S. When I was at the LCBO this week, I saw that they now have them in cans so decided to pick myself up a couple.

Rolling Rock calls itself "born small town", which it was. The beer originated in Latrobe, Pennsylvania, birthplace of Arnold Palmer, Mister Rogers and Rolling Rock Beer.

The Latrobe Brewing Company was originally opened in 1893 and brewed beer until prohibition was introduced. It was during that time that four brothers, Frank, Robert, Ralph, and Anthony Tito, decided to buy a brewery that was not allowed to brew beer. In 1933 when prohibition ended, the brothers started brewing, Then in 1939, they introduced a new beer to the market, Rolling Rock Pale Ale.

The beer was bottled in long neck green bottles, the style which is marketed today. The number 33 is on every can and bottle, interesting as no one can remember where it came from. There are theories of course: 1933 was the year prohibition ended and the Titos could start brewing, there were 33 steps from the first floor to the Brew Masters' office on the second floor, or there are 33 springs from the Allegheny Mountains that fed the brewery. 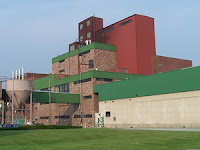 The repeal of prohibition sits most plausible with me along with this one. On every bottle is the company's slogan. It is thought that when the slogan was sent to the printer it was sent as "A little nip from the glass lined tanks of Old Latrobe. We tender this package as a premium beer for your delight and economical use. It comes from the mountain springs to you -33". The 33 was put in indicating the amount of words which needed to be paid for but the printer left it in. The slogan has changed over the years but has been careful to use only 33 words.

The brewery only ever promoted Rolling Rock as a regional beer and sales were not enough to sustain the business so in 1987, the brewery was sold to Labatt USA. Labatt loved the bottle and packaging and took Rolling Rock national where it did quite well.

Labatt was then bought out by InBev, which sold to Anheuser Busch in May 2006. The new owners wasted no time in moving the company to a facility it had in Newark and mere months later, on July 31, 2006, the last bottles of Rolling Rock came off the Latrobe line, leaving hundreds out of work.

So Rolling Rock may call itself "small town born" but the small town has now been taken out of it. I read a great quote from an article about the closing by the head of maintenance at the plant Nick Carota, "They can't market it as 'made from mountain spring water' when they're using water pulled from the East River!". 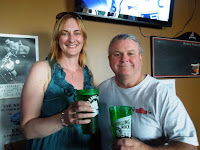 When water is 98% of what beer is made of, this is very true. In fact, it was said that the Rolling Rock changed slightly in taste from year to year due to the sediments that run off the hills into the mountain streams that feed the main brewing reservoir.

Last night I was at a birthday party at Hollywood on the Queensway for our friend, Angie, and they had Rolling Rock on yap. Great chance to compare Rolling Rock draft to their canned version. My friend, Darlene, a craft beer lover herself, was there too so I thought it would be great to get her view.

Our beers came in their definitive green glasses and we had a taste. I knew what I thought and when I asked her opinion, it matched mine. The beer started off with a nice pale ale bitterness then the taste suddenly went away leaving a watery finish. It was quite surprising.

We ordered another and when it came, Darlene smelled the glass. "Don't you hate it when you can smell the detergent in the beer!" I took a smell of mine and there it was. Detergent. The bartenders don't rinse the glasses after washing. The owners don't have glass a quick glass rinse sprayer that better beer places have.

No excuse for this. No excuse!

So really, I still can't give my opinion of the draft version of this beer. Who knows what effect the cleaning agents had on the beer. In fact, I actually left half a beer when I left.

So, I think it's time today to try the canned version, no not from the can on the right and from a glass which has been properly rinsed.

The beer pours golden in colour, very light with a small head which disappears quickly. This would be due to using rice along with the malt. It's good quality malt which leaves lacings on the glass and this glass has none. There is a slight hint of hops in the aroma.

There is not a lot of taste to this beer. At 4.5% APV, I had expected a lighter taste but the draft last night seemed to have more taste to it than this one. All the way through this beer tastes the same as last night's beer ended. It's not bad tasting, it's light light tasting as you would find in any big brewery beer.

Not a beer you would find me paying for in the future.