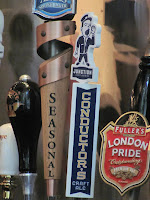 This being the last weekend of Ontario Craft Beer Week, I thought I should feature another Ontario Craft beer from a brewery that I haven't tried before.

I had an afternoon meeting yesterday near the Beer Bistro and knew I would be popping in for a pint afterwards.  So I went into their website to see what they had on tap and found they were pouring Junction Conductor's Craft Ale from Junction Brewery.

This is a unique opportunity. Not only did I get to try it yesterday on tap at the Beer Bistro but also again on today at Sessions 99 Craft Beer Festival, where Junction was there with the cask version.

Toronto has been very lucky the past year with many new craft breweries opening up in the area and Junction Brewery is one of them. They brought their product to market in August of last year, but not at any of the places I frequent. Finally I get a chance to give it a try.

Tom Patterson, the president, was a restaurateur, one that always ensured there was craft beer being served, even back in 1988 when craft beer was barely heard of. He owned the Paddock Tavern and that was where he met Doug Pengelly. 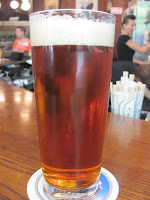 Pengelly, after taking Chemistry at Carlton University, then completing the Brewmaster Program at the University of California, had set up Saint Andre Brewing to brew beer commercially. Pengelly not only brewed with Saint Andre but also made deliveries. During those deliveries he became friends with Patterson.

From a Town Crier article on Junction Brewery ...

“We always kind of talked about, you know, one day when I’m not doing this restaurant thing I’d love to get together and start a brewery,” Paterson says. “Literally when I sold my last restaurant I called him and he said ‘yeah, let’s do it.”

They started brewing out of Wellington Brewery in Guelph, hoping to open a smaller brewery in the Junction in the fall. Once open, it will have a tasting room, store and a small brewing area for one-offs and experimental brews.

The Junction Triangle area of Toronto, which the brewery is named after, is so named for being formed by three sets of railroad tracks on the north, west, and east sides. My guess is that also accounts for the train being on the logo. 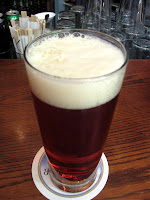 To infuse aromas into the beer, they have developed a "hopback" that uses whole Cascade and German Tetnanger hops in the line from the kettle to the fermenter. This is supposed to provide an intense hop aroma to the beer. I love the aroma of hops and hope this works.

The beer pours somewhat coppery in colour with an off white head that takes its time to disappear leaving behind a host of lacings. I notice very little in the aroma which is disappointing, even after swirling. I did feel somewhat stuffed up, though.

It is a little watery in mouthfeel and starts with a little bitterness which increases in strength in my mouth. I love the long hop bitterness in the finish. The finish is not overpowering as an IPA but very pronounced. This is a beer I like very much!

This is a nice session ale, nice enough that I had a couple of more while I finish watching the Germany/Greece Eurocup game. I did notice after being served the third beer that this one has a pleasant welcoming hoppiness in the aroma that I had been looking for. Guess my allergies had settled down.


***
It's now Saturday and time for Session 99. The Conductor is the first beer I wanted to try. The Junction booth was located inside the building at the back. Both Tom Patterson (pictured) and Doug Pengelly were there working the booth. They had the Conductors available on tap from a keg and also as I had hoped, a cask version. 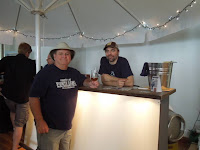 Of course, I had the cask version first.

The cask version had very little head as it is not carbonated. The flavours, though, are more complex and layered than the keg version. On their website, they say that for the Conductor, they were looking to get a "hop complexity that constantly changes in the glass as it warms up". They definitely achieved that with the cask version. The was a long finish, not as bitter as the draught version.

I had the keg version next. It was colder, not as complex, but much hoppier in the finish. An excellent beer. For a hot day like today, I love the draught version. On a cooler day, Conductor on cask would be the way to go.