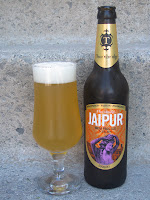 English brewers. I love researching them. Centuries old with lots of history behind them. Usually I have to figure out what to leave out of a post.

Not with Thornbridge Brewery! The brewery was opened in 2005 in a very small 10 barrel plant at Thornbridge Hall at Ashford-in-the-Water, a village in Derbyshire which is about exactly in the middle of England. Their beer became so popular that in 2009, just 4 years later, they opened separate 30,000 barrel a year brewery to handle the volume.

The brewery brews 10 different regular beers with Jaipur IPA being it's most successful. Jaipur has won 87 awards in just 7 years. 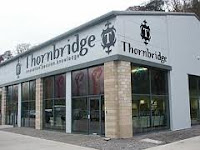 The beers they brew are pure with no pasteurisation or filtration. The beer continues to condition in the bottle. On the label is Flora who is The Goddess of Flowers. Her statue resides in the Italian Garden at Thornbridge Hall. They put her on the brewery labels as "like our beers she represents, beautiful elegance and is a compliment to the craft of her maker."

Jaipur pours yellow and cloudy due to being unfiltered and bottle conditioned. It has a nice white fluffy head which leaves behind beautiful lacings along the inside of the glass.

There is citrus in the aroma. I figure citra hops must be in the brew and added at the end to add to the aroma. I love, I mean really love citra hops. I just discovered them last summer. They bring a wonderful fresh taste to an ale.

After having a couple of sips, I am actually quite surprised as it is quite light tasting for an IPA. The citra hops really come through and create a terrific tasting, refreshing summer beer. The citrus then disappears in the long bitter finish.

I am really loving this beer!

One thing I notice though is that the bitter finish starts to diminish as I sip on my glass. I refill the glass from the rest of the bottle (Japipur IPA comes in a 500ml bottle @ $4.55 which is too much for my "Showcase Glass)and still the taste seems to have disappeared. I open a fresh bottle and find the same.

Very strange? I have had beers with citra hops before and know they are enduring. I am not sure what the issue is here. On the bottle it does say best before July 24th of this year. Maybe I just have an old bottle. Checking the LCBO website, I find this beer is now discontinued.

I would love to have fresh bottle of this beer to see all it can be. From my initial taste, this could be one beautiful beer.