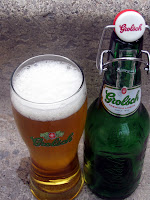 I cannot believe that I have not done Grolsch as a Beer of the Week.

It is my very favorite lager, and always has been, even when I really did not like lagers. That may be the reason, though. I like to write about beers that are new to me from breweries that I have not written about.

Well, it's time to throw in an old favorite in the Beer of the Week mix.

Back in the late 80s, Ontario had a lot of Brew Your Own Beer shops. A friend from work, Jim, and I would brew together, trying different recipes which hung on the wall. We would brew one week, come back two weeks later to bottle. One of our favorite recipes was Grolsch, well, really a Grolsch knock-off.

In those days, Grolsch, the real stuff, was not available in Ontario. After about a year of brewing, I went to London, England, and while there found that they had Grolsch at my hotel. My last night there I talked to the manager of the bar to try to get him to sell me 4 bottles of Grolsch, unopened, which was not legal to do. He was fascinated that we had brew your own places, that Jim and I brewed a version of Grolsch, and that I wanted Jim to taste the real stuff.

So that was my very first time flying home with beer in my suitcase!

I love their specially designed 450 ml bottle with the swing-top cap. Very distinctive. It also comes in a 330 ml, regular capped bottle, with Grolsch marked in the glass, but really is not as fun as the swing top cap. I love the pop sound of the swing cap being released and that sudden explosion of hoppy aroma that leaps out of the bottle neck.

Oh, you might notice that I really enjoy this beer.

The brewery was founded in 1615 in Groenlo, Holland. In 1895, it was bought out by the de Groen family. In November 2007, Grolsch was bought out by SABMiller for 814 million euros which works out to $1.2 Billion. Billion has to be spelled with a capital "B".

So here is my unbiased view of the beer. OK, very biased, as for years although I would turn my nose up at a lager, would almost rejoice when I found in in a bottle or on tap at a pub. Yes, it is a regular visitor to my fridge.

This may sound more of a love letter than a review.

Like I said earlier, this beer has a great aroma. It must be dry hopped as hops greet you in the aroma. Not in the same way as it does in a hoppy ale, but when you hear the pop and breath in that aroma, you already are aware that this will be a great refreshing beer.

And the taste does not disappoint.

The beer does pour golden with a fluffy white head. The head does disappear quickly and there are no lacings along the side of the glass. There is a nice light taste when first sipped and then a nice hop bite come through in the finish. Lagers usually have short finishes, but I find this one lingers on.

There used to be a place around the corner from us called the Bungalow. They served Grolsch from the swing cap bottle. When I would order one, Kyle, who usually was our server, would take it out of the fridge, hold it up and walk it over with one hand under the bottle, the other hand behind it and do more of a slow march step as he brought it over. Then with much ceremony, he would pop he top. 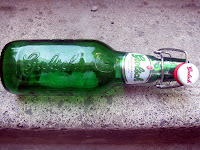 Fun for the first one but really it got old quick but Kyle would do it every single time he served a Grolsch.

I found when researching Grolsch today that the company was awarded the Royal title or Koninklijk in 1995. Only the country's monarch has the right to grant this. The qualifications are:

I guess Kyle was right in giving every Grolsch served, proper ceremony!

Labels: Beer of the week, Netherlands