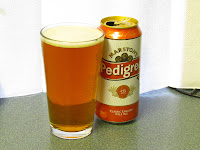 If there is a day made for light beer, it is a Sunday. It is nice to sit outside enjoying the nice weather, or sitting in and watching sports on TV and having a couple of beer. Having to work the next day, I prefer a light beer on a Sunday.

The English have a way of doing this well. They can make a nice hoppy 4.5 APV or less, nice tasting beer. Today I am going to try Marston's Pedigree. I have written about the brewery before when I had their 6.2% Marston's Pedigree V.S.O.P., which I really enjoyed. So after a busy weekend, I am sitting back, watching the Jays take on Cleveland and figure it's time to try V.S.O.P's lighter brother.

It pours coppery in colour with very little head. The head disappears quickly leaving behind very few lacings. The there is a bit of caramel flavour coming in from the malt and just a touch of bitterness in the end.

This beer does prove that you can brew a beer with taste but with lower alcohol. I believe that many would enjoy this beer, but for me this is just not hoppy enough.
Posted by Swordsman at 15:26