Beer of the Week - The Beers of Yukon Brewing 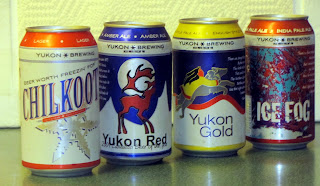 I missed the odd week during my first year of writing these posts so this really is not the third anniversary of BOTW posts but still, this is 3 years of beer!

156 different beers from around the country and around the world. To celebrate, I wanted to do something special but what?

I decided I wanted to do something Canadian, then thought ... how about finding a Canadian craft brewer from as far away as possible to get a beer to review?

I started with the Territories, starting with the Yukon, a place I have always wanted to visit since I first heard about it in public school. My first search brought up Yukon Brewing located in Whitehorse which is the Yukon's capital. Question now was how to get beer from there to here.

I emailed the brewery asking just this question. I explained what I was trying to do and why, plus I sent him the link to my blog. 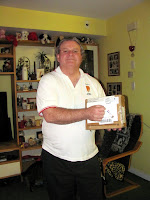 The next day I received a reply from Bob at the brewery. He explained, "The problem is, the high cost of freight to send very small amounts results in outrageously high costs … especially at this time of year, when it must be flown to prevent freezing."

Then I read on ... "I would be happy to send you some samples, if that would be helpful. I notice that you have canned beer on your website, and we offer four of our eight products in cans … those are always better to ship from a breakability and weight point of view. What do you think?"

I thought it was a great idea!

Four days later the package arrived at my door with 4 cans of beer all the way from the Yukon. 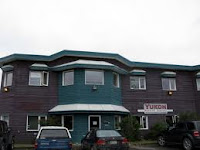 Owners Bob and Alan, both originally  from Ontario, moved and had spent much of their lives in the Yukon. One day, while sitting around a campfire during a canoe trip (can't get more Canadian than that), they decided to start a brewery.

In 1997, that dream came true when they opened Chilkoot Brewing Co. Later they changed the name to what it is now Yukon Brewing.

Being in business for 15 years shows how much people in the Yukon enjoy their beer. The brewery has expanding 7 times since it opened and now sells more than a million pints a year. In fact, I read an article from the Globe and Mail that told of a couple's wedding where "guests could choose a bottle of Yukon Gold, Yukon Red or Ice Fog by Yukon Brewing from a canoe filled with ice. Each style had a personalized label with a picture of the couple."

There's brand loyalty for you and a wedding I would like to attend! 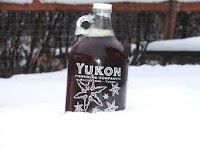 In 2009, their Yukon Red won the beer of the year at the Canadian Brewing Awards, no small feat beating out 25 other beers that won gold in their division. A great article from the Yukon News is here.

Now, it's time to try the beer!

I always do my my best to make sure I try beers from a clean well-rinsed glass, which also is the reason I usually buy 2 beers when I am trying a new one. If the first one does not pour properly, I can get another glass to see if it is the beer or the glass. I only have one of each to try so I am being extra careful to ensure a glass totally free of contaminants. 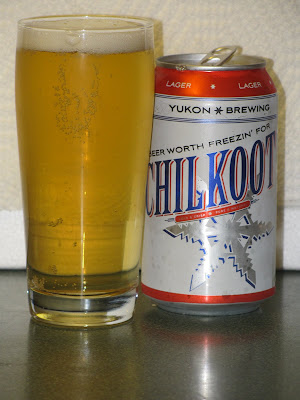 Originally Yukon Brewery only made ales but, in 2000, they decided it was time to also make a lager. Good move as it is now one of their best selling beers.

Chilkoot pours yellow in colour with a nice white head. Slight floral hop note to aroma. Lacings line the glass as I sip (yes, I did a good job on the glass!). This is a nice flavourful lager. It starts a little sweet and finishes with a little bitterness.

Even though it is 5% APV, I find it is a light tasting lager. Even though the tag line on the can reads "Beer worth freezing for", this would be a great beer to have on a hot summer afternoon. If it was available here, it would be part of my lager rotation. 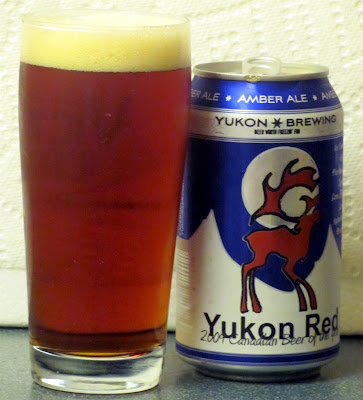 There is a slight aroma of maybe caramel in the aroma. The beer pours brown with a reddish tinge to it. The head does have a brownish tone to it. Heavy lacings line the glass showing how malt heavy this beer is. It is not a sweet beer at all as the malt is well-balanced with the hops. The result is a full-flavoured beer. I taste a little bit of the caramel which I sensed in the aroma but is overcome by a pleasant bitterness. I really enjoyed this and think it would make for a great session ale! 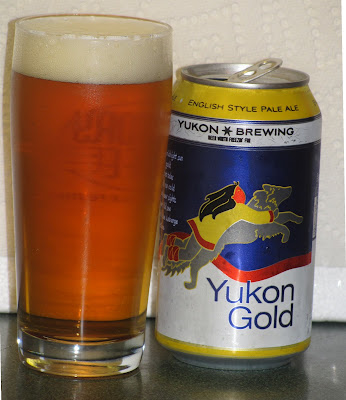 This is the number one selling draught in the Yukon, even beating the out the big breweries armed with all their cash for promotions.

This one is golden in colour with a nice white head. I let it sit for a couple of minutes as the head was not disappearing. According to their website, they use 5 types of malt plus a malted wheat. Again heavy lacings line the glass proving this to be true. It is brewed in the English ale style so has noble Saaz, Sterling and UK Golding hops.

I do not sense anything in the aroma.

This is not an overwhelming ale. On first sip, I wasn't crazy about it but the more I sipped, the more I liked it. It starts a little watery in taste and mouthfeel but finishes well with a decent slightly bitter finish. When the glass was empty, I wished there was another to have. I don't think I would buy this for home but if I was at a pub, I could see myself having a few, heck, maybe more than a few of these. 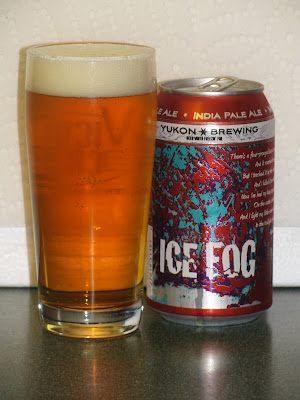 My hopes are that this will be the star of the show. I love IPAs. Originally made strong flavoured and heavily malted and hopped to survive travel from England to India by sea, this one too has travelled a long way to find a spot in my fridge.

I wonder what to expect. The website says ... "Unlike the hundreds of other IPAs out there, we’re not going for the “hip and hop” award with this brew, going over the top with bitterness. It’s a session beer for folks who appreciate an IPA with balance." The other beers were all 5% but this one comes in at 6% APV.

This one too pours a golden colour with a nice white head. Heavy lacings again line the inside of the glass. This company loves its malt! This is a very flavourful IPA, one which does not hit you over the head with hop intensity but does have a nice long hop finish. If I were in the Yukon, I could and would have a lot of these.


***
Overall there was not a beer in this batch that disappointed. Ice Fog IPA was my favorite, followed by the Red Amber ale.

Finally, here is a picture of Bob Baxter from Yukon Brewing, the person who made this possible for me. Thanks. Bob! I really appreciate it and one day I hope to be able to stop off at your brewery and have a pint or two with you! 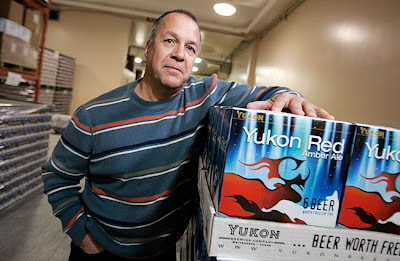 Labels: Beer of the week, Yukon