The Toronto Rock and the ACC Platinum Box 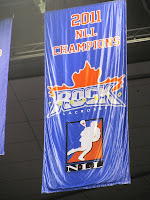 Tonight I was invited by my company to the "Platinum Box" at the Air Canada Centre (ACC) to see the World Champion Toronto Rock take on the Rochester Knighthawks in National Lacrosse league (NLL) action. It was a crucial game for the Rock, who were just a game back of the division leading Philadelphia Wings.

I have been to box seats with Teena's company so thought I knew how this works. That was until I was asked by Teresa, who was heading the event asking who wanted to get together before the game for a drink at a pub. I declined saying I would see them in the box for the game.

I was confused with her reply asking if I would be joining them in the box "before" the game. My reply was that yes, I planned to be there early and looked forward to seeing the game from the company box.

She replied, no, we go to the box first, then to our seats. You can't see the game from the box.

OK, obviously she was the one who was confused here. We'll sort it all out at the game. 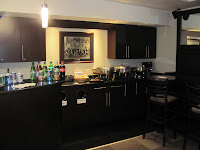 So I arrived at the ACC and went to the section on my ticket. The usher pointed out where my seat was. I mentioned that I was supposed to meet my party in the box. She pointed me out to the usher that stood by an entrance way right behind the players bench. He guided me to our box, which was a small room in a hallway below the stands.

Teresa was right. Sorry to doubt you, Teresa. The box was very cool and the seats were great, 4 rows behind the Knighthawks bench.

We had great food and a few drinks and went to head out to see the opening ceremonies (yes, the food and drinks are still available during the game from the box). Then it occurred to me how extra cool our box was. We were located between where both teams came from their dressing rooms to enter the arena. Talk about being up close!

The Rock started the game by honouring their Hall of Fame Goalie Bob Watson by retiring his sweater, the first Rock player to have their sweater retired and number raised above the floor of the ACC. He did nothing less than anchoring the Rock through 6 Championships, the last one being last year. What a way to finish a career! 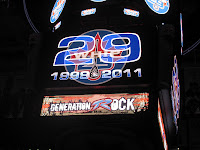 The Rock had a 5 - 0 lead by the end of the first quarter but the Knighthawks came back to make a game out of it. Toronto prevailed 16 - 12.

10,274 fans were in attendance at the game. There should have been more. Indoor lacrosse is a fast, exciting and rough game. The ball control is amazing. Admittedly I have been to very few games and each time have come away vowing to get season tickets for next season. Tonight was the same and next year I will!

I did stop at the box office on the way out and bought 2 tickets for next Saturday night's game against Washington for Teena and I. I'm looking forward to it.

Thanks to the people I work for for inviting me along. I had a great time meeting people from work that usually I only get to communicate by email.

Lacrosse is extremely fast and hard to capture on film. I found myself focusing the camera on the net, watching the game without the viewfinder and clicking when I thought something was going to happen

Here are some pictures from the game.

***
Honouring Bob Watson before the game. 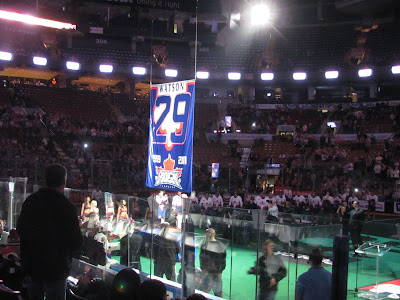 Opening faceoff. For faceoffs, the ball is set on the floor and the players lineup with the nets of their sticks backwards to the ball. 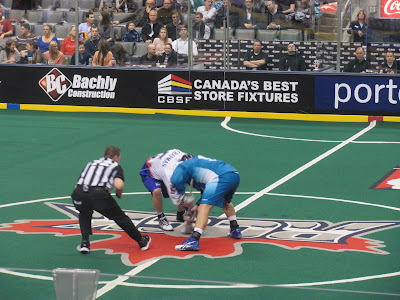 Rock goalie Matt Roik makes a save. The ball is glacing off his shoulder. 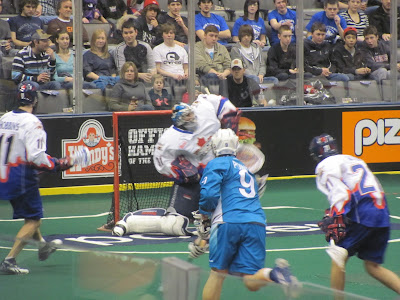 Action around the Rochester net. Matt Vinc makes a save. The ball is against his blocker. He had a busy night as the Rock peppered him with 59 shots. 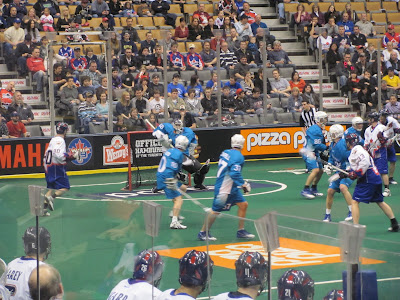 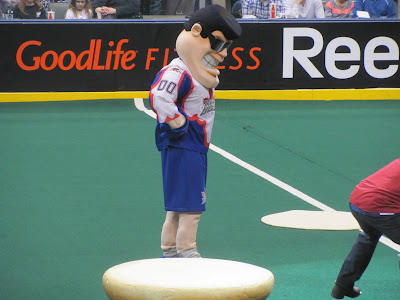 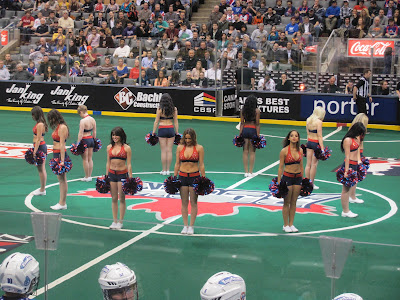 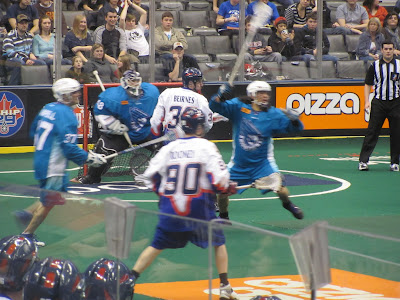 Here is how close we could get to the players. The defeated Knighthawks and the victorious Rock. 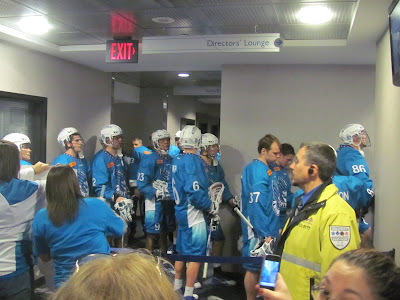 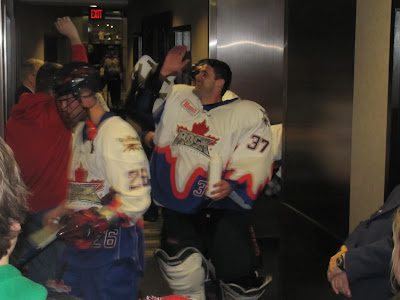 During the game the guard allowed me to get to the top step of the entrance to the dressing room of the Leafs, Rock and Raptors. I felt like a kid at that moment! 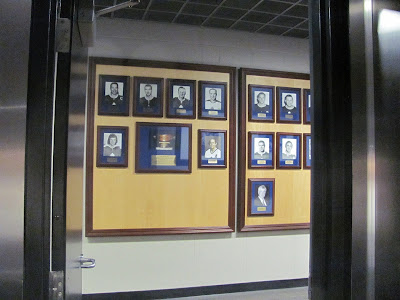