Sucked in by the Tim Hortons Cup Psychology 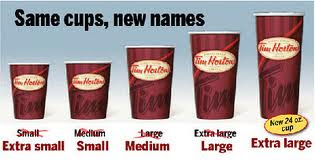 Everyday every Tim Hortons I walk by has a very long line-up.

They have the staff to handle it so when you think the line may take a half hour to get through, it only takes minutes. Keep in mind I am speaking about in store, not drive through as I have no experience with that.

My standard order at Tims is a "large black double cup". Translation, a large black with one cup set inside another so I do not burn my fingers. Their cups are quite thin.

Interesting note if you didn't know is that a "double double" is a double sugar and double cream, and is a term so well-known in Canada that it is now in the dictionary. Also Tim Horton was a famous Toronto Maple Leaf defenceman from the 60s who started the chain.

To me, a large was enough. It seemed too much to go to the "extra large". In fact, I never saw many people carrying around an extra large. 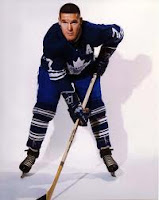 Then Tims (what many of us in Canada call it) changed their cup size. They downgraded all their cup sizes so my large suddenly became a medium. Then they added a new 24 oz "extra large" size, which bigger than their old extra large.

The first time I walked up, which was the first day of the change, and ordered my usual "large black double cup", the server pointed at the new cup sizes and explained how a large is now in an extra large glass but called a large.

I knew it was going to be a long morning. I was tired, it was Monday morning so I said sure, I want the new large size. Now the new large size is the same price as the old extra large size, which is not much more, maybe 20 cents. So my large became a medium but I ordered a large which was an extra large.

The result ... when I go to Tims now, I always get the new large (old extra large). I also see many others doing the same. I now see many people down in the concourse with the old extra large cups (now large) in their hands.

Then it hit me.

They used psychology on us. We didn't order extra large before as it seemed too much. So they made an even bigger extra large and renamed the sizes. They don't care if few people or any order the new extra large. They were counting on sucking most of us in on moving up a size and we are. I get a bigger cup of coffee but pay more.

And now that I realize this, am I mad, will I go back to buying my old size (now medium)? The scheme was so smart I can only applaud it and will do so tomorrow when ordering my "large black double cup".

Now if they would love me and let me win big on their "Roll up to Win" game!
Posted by Swordsman at 19:28

I use to order a medium double double on my way to work, now I order a small double double, though my order sounds like this;

"I'll have a medium Double Double please, NO SMALL!". LOL!